As the morning sunlight filters through your bedroom window, the phone alarm goes off.  Haven’t even bothered to change it to a catchy ringtone.  “What’s the point,” you ask yourself, “of doing that… or doing anything, really?”

For anyone who’s been a part of, or seen media touching on, the grinded-down office worker within the modern corporatist machine, Norwegian developer Krillbite’s newest game hits many of the same beats.  Whether it’s more comedic riffs like Office Space or vicious gore-fests like The Belko Experiment, the theme of this setting psychologically ruining people is easy to find.  But Mosaic finds a few nuanced ways to incorporate these dreary sensations into a game.  Aside from some choice complaints, this sardonic narrative-adventure—ironically—finds a way to keep its exploration of office tedium & existentialism engaging until the end. 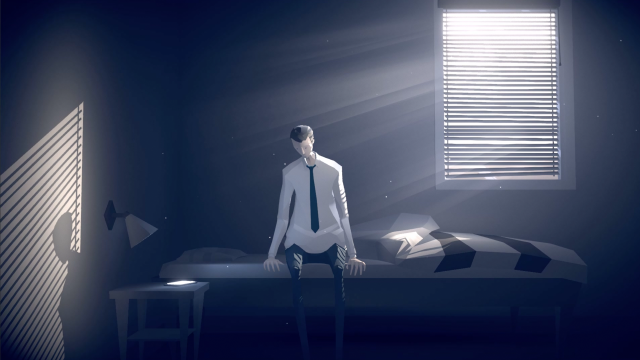 You take control of an unnamed office busybody during the course of a work week.  The closest thing to an identity he has is his employee number: 978-067443006.  His day begins the same: waking from a lucid dream, slowly getting out of bed, and answering the phone alarm.  His sparse, unwelcoming apartment has few amenities—and even less food in the fridge.  There’re choices one could make before heading to work like fixing your hair or brushing your teeth, but this routine does nothing to change how others apathetically respond to your presence.

Your phone plays just as much of a reminder of your dull conditions as your apartment.  Each day brings a new text message counting down how many times you can be late before your overlords are contractually allowed to end your employment, or even decrease your salary before then.  It’s a source of perpetual gloom and emptiness, yet it’s also necessary as a means of identification.

There’s a mini-game called BlipBlop that’s just about mashing the ‘A’ button (or a Blip) to build up your total number of Blops.  These can then be spent to acquire a Blip multiplier or inflate your rate of ‘auto-blipping.’  This sounds like gobbledygook because... it is—and that’s the point!  Useless as it may be, though, I can’t deny its addictive quality.  With the black-and-white aesthetic and the moving elements when you score a multiplier, it does a good job of tapping into your lizard-brain's sense of reward.  There are other satirical nods found in the phone’s dating and crypto-currency trading apps too.  What are otherwise minor bits of world-building had me wholly invested in the game's phone, which makes me question why I would feel this way to begin with. 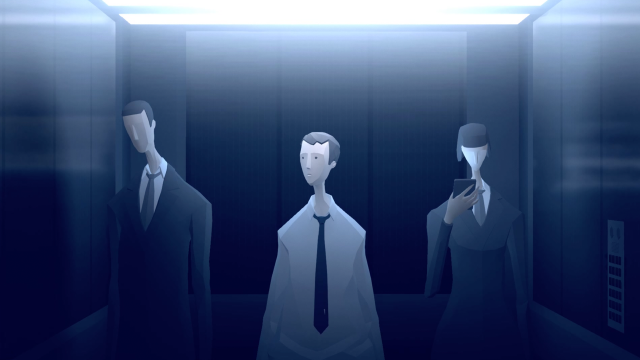 On the surface, some may consider this a pretentious exercise of delving into well-worn topics and the team patting themselves on their collective backs.  They even get into meta territory with a “1% Edition” that removes interruptive advertisements from your phone (full disclosure: this is the version PR gave me).  “Yes, yes, it’s funny how communication devices are distancing us from personal relationships.  Or how boxed-in one can feel with a mundane office job.  Very impressive, Lee.”  But it’s in the nuanced situational writing that I think Mosaic succeeds.  There was always one extra detail or unexpected turn that incorporated these themes in a substantial way.

Presentation also enhanced this.  The muted color palette of the metropolis, the interior apartment, and characters felt appropriate, and mirrored that of INSIDE’s evocative imagery; in a way, it’s quite similar to what I’d imagine Playdead would visually design for their hypothetical corporate hellscape.  The greyish tint and Brutalist architecture are a great backdrop to emphasize the disparity of those technicolor moments that the protagonist witnesses when stumbling into street performers.  Even the minute character tweaks like our protagonist’s skinny-yet-also-pot-bellied frame and the polygon mesh aesthetic for everyone feel apposite for this climate. 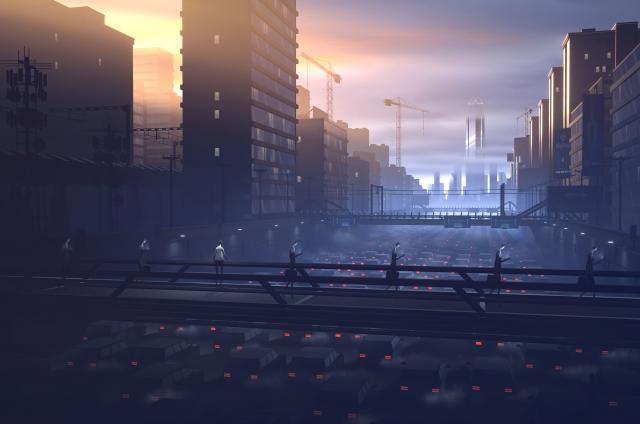 Sound design also complements this setting.  It’s worth noting that the closest thing to ‘voice acting’ are distorted noises from one of several computers or intercoms.  The story relies heavily on evoking lonely moods through its soundtrack and sound design.  Both of which are expected and appropriately suited.  The short respites of hearing a couple of jazz tunes punctuate the dismalness heard everywhere else.  All activity relegated to a computer or phone sounded fitting; on top of that, more credit is due to the designers meticulously capturing a city’s audio pollution as well.

The protagonist’s computer job, the nearest to a gameplay core, is a mundane process of extracting resources (in the size of little squares) and connecting them with hexagonal grids to reach the daily milestone: The Mosaic Corporation’s emblem.  It’s essentially an apropos-of-nothing mini-game that... strangely becomes more and more involving over time.  Despite obtuse design in implementing shortcuts, there’s something about its monochromatic look and the sensation of building a complex grid-web that feels intangibly important to you.

Outside of work, there are a few gameplay extras.  Previously mentioned phone apps go a long way in giving context to the dystopian world.  I also appreciated the nice touch of allowing it to be used anytime outside of story-heavy moments; several instances of flipping through messages or playing BlipBlop made me miss a critical environmental detail.  Some transient puzzles are scattered about as well, but they’re more impressive in respect to their storytelling than difficulty.

For a narrative adventure/walking sim, Mosaic occupies unique territory.  It’s important to recognize the limited mechanics, but virtually every element gives pivotal texture to the game world.  Whether considering BlipBlop’s leveling & perk structure mirroring Call of Duty’s multiplayer goodies, having all achievements (or trophies) centered around BlipBlop, or the subtle jabs pointing at the game’s own futility, few stones are left unturned with respect to its commentary. 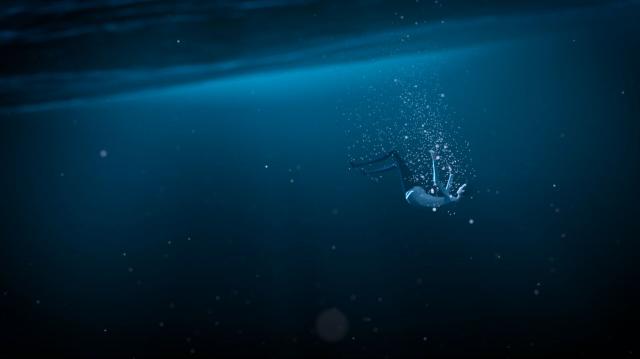 For the wealth of praise I’m giving Mosaic, it’s not without drawbacks.  As much as I applaud the art style, technical annoyances like framerate drops (even to 10-15 fps) were far too grating for its rather slim runtime.  Value will also be another point of contention (slightly over a two hour runtime for a $20 game), but it’s worth noting that this particular type of story-heavy adventure has slightly more elasticity than other one-and-done experiences.  As hilarious as it is to admit, the grind-fest of BlipBlop did stretch out my playing time an extra half-hour or more.  Perhaps that consideration still isn’t enough for typical gamers anyways—something I can empathize with.

In the end, Mosaic is an engrossing examination of the type of consumerist & corporate world that doesn’t seem so far away.  It’s so engaging in part because of how cynically Krillbite portrays its rotting world, yet never without forgetting flashes of humanity and creative liberty; the slim assembly of gameplay concepts are demoralizing on their own, but if you stick with these peculiar mechanics and the well-paced story you’ll find reward in those glimpses of freedom too.

This review is based on a digital copy of Mosaic for the XOne, provided by the publisher.

What a stunning looking game.