Re-Logic’s charming 2D sandbox title Terraria has seen a number of releases and a few updates since it hit the scene in 2011, and it’s still as enriching and fun as ever on the Switch.

For Switch gamers new to the IP - Terraria is essentially a slightly more linear Minecraft-style adventure game, with some 2D action sensibilities that resemble Metroidvanias. You’re dropped into a world that ranges from (relatively) small, to medium, to expansively large, and can tinker with tons of character customizations. From there, you’re turned loose to traverse a strange world brimming with unique and rich biomes; both above and below ground. 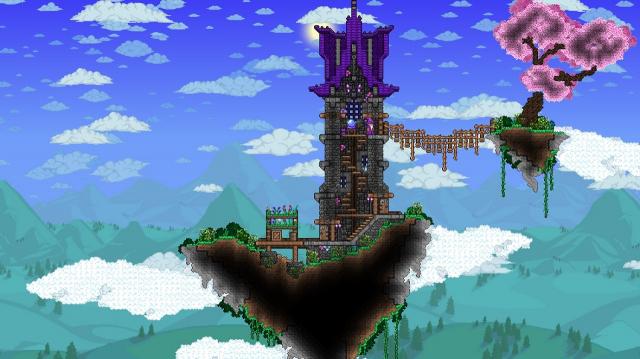 There you’ll be fending off an endless variety of colorful monsters, mining for resources, and collecting goodies. All of these contribute towards player progression, equipment, and building an increasingly stronger and more robust home base. Aside from some NPCs that move into your buildings as you flesh them out - including a guide that gives you basic tips - it’s just you against a vast, hostile world.

Terraria explorers who’ve poured countless hours into the PC release already know this is an endlessly fun, addictive romp - but how does it fare on Nintendo’s home console/handheld? Will newcomers get a kick out of this eight year old game, and is it worth the $30 investment for diehard fans? While there are a few caveats, for the most part the answer is yes on both fronts. 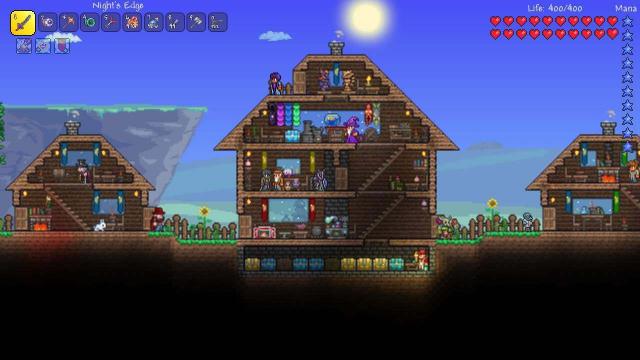 This Switch rendition of Terraria comes with the game’s latest (3.1) update, also known as the “Wiring & Mechanics Update.” This retooling irons out some bugs, adds inventory sorting, and spruces up the sprites a bit. It also adds even more items to the already absurd list of nearly 3000, such as Conveyor Belts and Presserators. Finally, it adds new content, including an Expert Mode and the Celestial Invasion Event. In that event you’ll engage in frantic battles with a barrage of crazy alien foes.

Additionally, the Switch port boasts a surprisingly solid eight player online mode (which requires a Nintendo Switch Online membership) and touch screen functionality. The online features are particularly awesome, as you can have a friend or three hop right into your world to build and take on baddies together. In my experience, this process ran quite smoothly for the most part, even when playing in handheld mode. Nintendo’s certainly come a long way since the nearly broken online functionality of Smash Bros. Brawl. 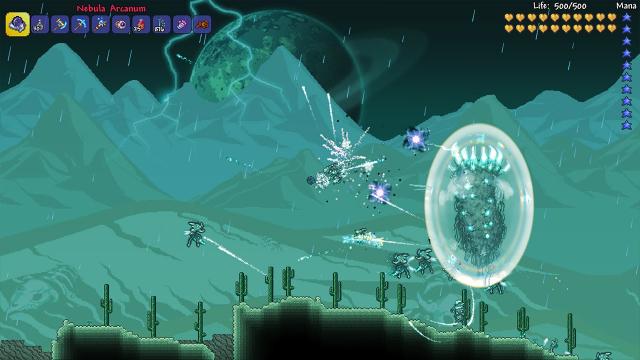 The handy touch screen support is perhaps the biggest selling point of this particular console version, as the interface is highly tailored to keyboard and mouse controls. Bouncing between joycon controls and touch-based inputs can feel a tad awkward compared to the PC’s swift and intuitive nature of pointing, clicking, and pecking hotkeys. Scrambling to shuffle through your cluttered inventory to swap your pickaxe with a sword as you get harassed by mutant spiders isn’t always ideal either, and interacting with elements like doors and chests can also be abnormally tricky at times. Still, at least as far as console and mobile ports go, Switch proves to be the best way to play Terraria. It brings that more satisfying tactile feel of button inputs while offering some of the easier, responsive nature of PC/mobile controls. You’ve also got a great, more nuanced feel of the HD rumble in action as you mine, build, and strike enemies.

While you can technically use touch-based input to execute many in-game commands, including mining and attacking, this isn’t too practical. Even with the rather useful window that separates and magnifies the area you’re interacting with, it’s tough to see what you’re doing when obstructing the Switch’s small screen with your finger. Where this functionally does excel is in inventory management and camera movement as it goes a long way in making for a smoother experience. You can simply drag items around and instantly swap them, as well as click on the map to pull it up on the main screen. This allows you to navigate the map with touch controls; which you can also achieve in the main viewer. You can even zoom the camera in or out in real-time while playing by pinching the screen in smartphone fashion. 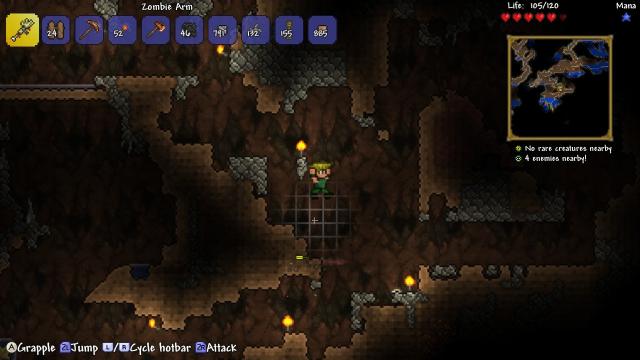 Of course, these perks are basically off-limits when playing docked. The trade-off, however, is you get a wider perspective of your surroundings, not to mention some vibrant, colorful aesthetics that really pop on a big HD set. While the game displays at an admirable 720p in handheld mode, the charming pixel art aesthetics really shine with the 1080p output and relatively smooth 60FPS when docked. Load times are also pretty consistently solid both in docked and handheld mode.

The joy-con controls aren’t bad when playing in traditional home console fashion, either. The hotbar makes shuffling through items rather painless, as do the simple-to-grasp button commands that let you quickly hop from one menu to another. With a subtle but surprisingly effective function, you can also swap between two modes of aiming/targeting via a simple click of the left joycon. The first of these methods is a sort of “auto-aim” where the cursor jumps around to all areas in your general vicinity. The second is a more precision-based grid. You can nudge your cursor to different spots on this grid by tapping the d-pad. The auto-aim is ideal for quick mining and combat, while the grid is more tailored to methodical building and laying down straightaways like bridges and climbable rope. 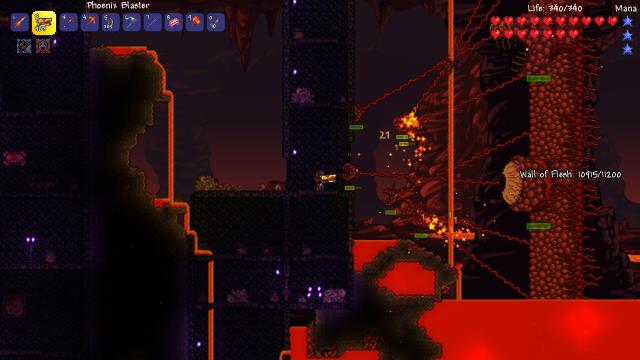 Make no mistake, if you’ve mainly played Terraria on PC then there will be a learning curve, and likely a few embarrassing deaths as you’re overrun by slimes while fumbling with the controls. Yet, after some minutes of tinkering with the interface and inputs, it mostly tends to click. It's tough to say you'll be running around executing commands as quickly as in the PC version - especially when playing docked - but you can at least get close. Relegating the main action-based inputs (jumping, attacking, and mining) to the ZL and ZR buttons makes for a relatively intuitive and painless control scheme. The sidescrolling nature of Terraria is such that this new hybrid style of input rarely feels overwhelming and, in fact, often feels great.

The question largely remains as to whether or not this re-release is worthy of another purchase. It sits at 30 USD, which is somewhat steep for what’s largely a direct port of an 8 year old game; especially for a digital download. Still, collectors and fans alike may find added value in nabbing a physical cart (which exists at the same price) of this otherwise digital-only release. With this caveat: owners of the mobile and/or previous console ports of Terraria might want to skip this one. On the other hand it's surely a worthy investment for new Nintendo fans seeking an enduring, expansive Metroidvania, and diehards wanting a relatively new, more convenient way to play this stellar adventure game.

This review is based on a digital copy of Terraria for the NS, provided by the publisher.