The premier Surge game was a solid start for developer Deck 13. It took a successful Souls-like formula, wrapped it up in a dystopian science-fiction setting, softened its punishing gameplay, and introduced a rewarding limb-severing mechanic. It probably didn't make anyone forget about From Software's signature series, but it carved out a niche all its own in the cottage industry started by Dark Souls. Its sequel, The Surge 2, is more of the same, which is a good thing. It's not a quantum leap over its predecessor—some issues with storytelling and technical performance mar the package—but it is a solid entry in the Souls-like sub-genre, with improved combat, interesting new asynchronous multiplayer features, and a larger, more varied game world.

The Surge 2 takes place several months after the events of the first game. A rocket containing deadly nanites, launched from CREO headquarters, collides with a commercial jet and lands in Jericho City. The player character, a passenger on the jet, wakes from a coma several months later to find the city badly damaged, overrun with hostile forces, and surrounded by a giant magnetic wall. In the character's absence, a nanite swarm infected the city, allowing gangs and nanotechnology cultists to rise to power and prompting the A.I.D., a paramilitary organization, to erect the wall and issue a quarantine. Now, surrounded by enemies and haunted by visions of a girl from the plane crash, the unnamed hero looks to escape the city alive. 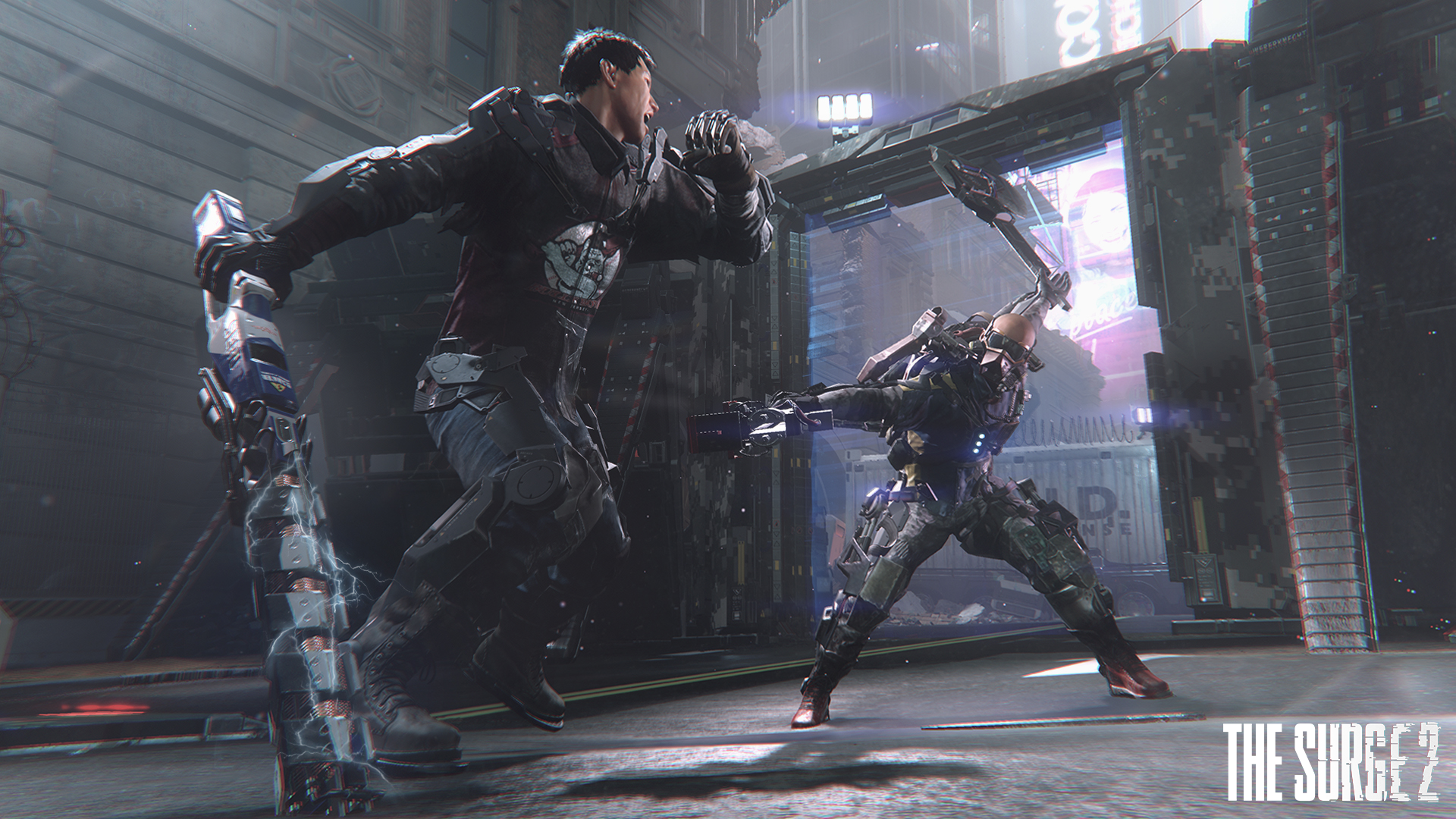 For the most part, The Surge 2 improves on the formula Deck13 designed two years ago. Storytelling, however, is a clear step backward. Where the first game focused mostly on environmental storytelling—leveraging the creepy, blood-splattered hallways of CREO to tell a wordless story—this sequel is more intent on telling, not showing. Multiple NPCs, some of them familiar faces from The Surge, offer plenty of exposition, as do nanite visions left behind by Athena, the mystery girl. Thematically, the story is also less impressive. Unlike the original, which subverted technology and technocracy, this installment adopts a generic plotline with a missing girl and a host of stereotypical villains—the kind of narrative found in a dozen seventh-gen AA and AAA games. With its biblical allusions and nanite cultists, the game seems to want to say something about religion, but it never goes anywhere.

Gratefully, on the gameplay front The Surge 2 delivers a better product. It features visceral third-person hack-and-slash combat set in an interconnected world. As you march through the streets, alleys, and decaying buildings of Jericho City, you'll fight monsters, robots, and humans in a series of deadly encounters. Each defeated enemy earns "scrap", the game's currency, used at medbays (think bonfires in Dark Souls) to level up stats, armor, implants, and weapons. Fall in battle and you'll lose all that scrap—unless you're brave and crafty enough to retrace your steps and reclaim it before time expires. 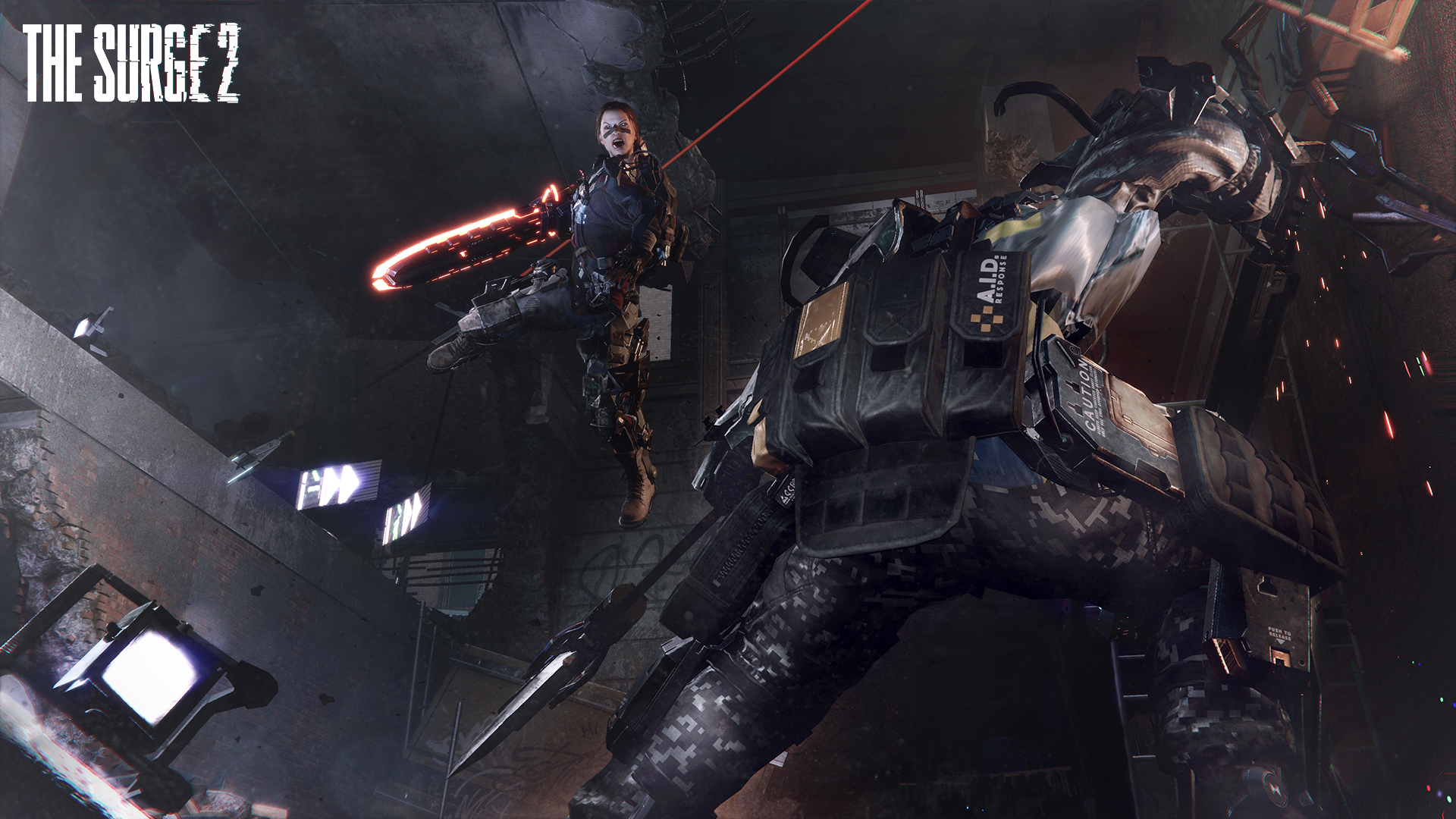 What sets The Surge series apart from the Souls-like flock, apart from its dystopian setting, is a clever limb dismemberment system that makes combat more tactical and visceral than average. When you engage with an enemy you can lock-on, then move the right analog stick to select individual areas of the target's body. If you do enough damage to a leg, arm, or head, a prompt will appear. Press X to spend a battery and sever that body part, defeating the enemy and claiming the armor or weapon attached to the appendage. This never, ever gets old. It provides a unique way to collect desirable armor and weapons and grants combat a cinematic flourish.

The Surge 2 retains this rewarding, instinctive brand of melee fighting and enhances it with new enemies, new drone modules, and a directional block which completely changes the cadence of combat. Enemies appear in different sizes and shapes, and feature a few new tricks. A.I.D. sentries carry large energy shields that demand a charge attack to dismantle, while nanite cultists will enter into a rage state after absorbing too many blows. Your handy drone sidekick, earned after the first boss encounter, now has a range of useful modules, including a sniper shot, an incendiary grenade, and an EMP blast. Finally, and most importantly, the game introduces directional block, which allows players to parry attacks in four directions with perfect timing. In the first Surge game, evading attacks was always superior to blocking them; in this sequel, blocking is a viable and useful strategy and can open powerful enemies up to counter-attack. Pro tip: equip the implant Directional Block Analyzer as soon as you get it and keep it equipped for the rest of the game. 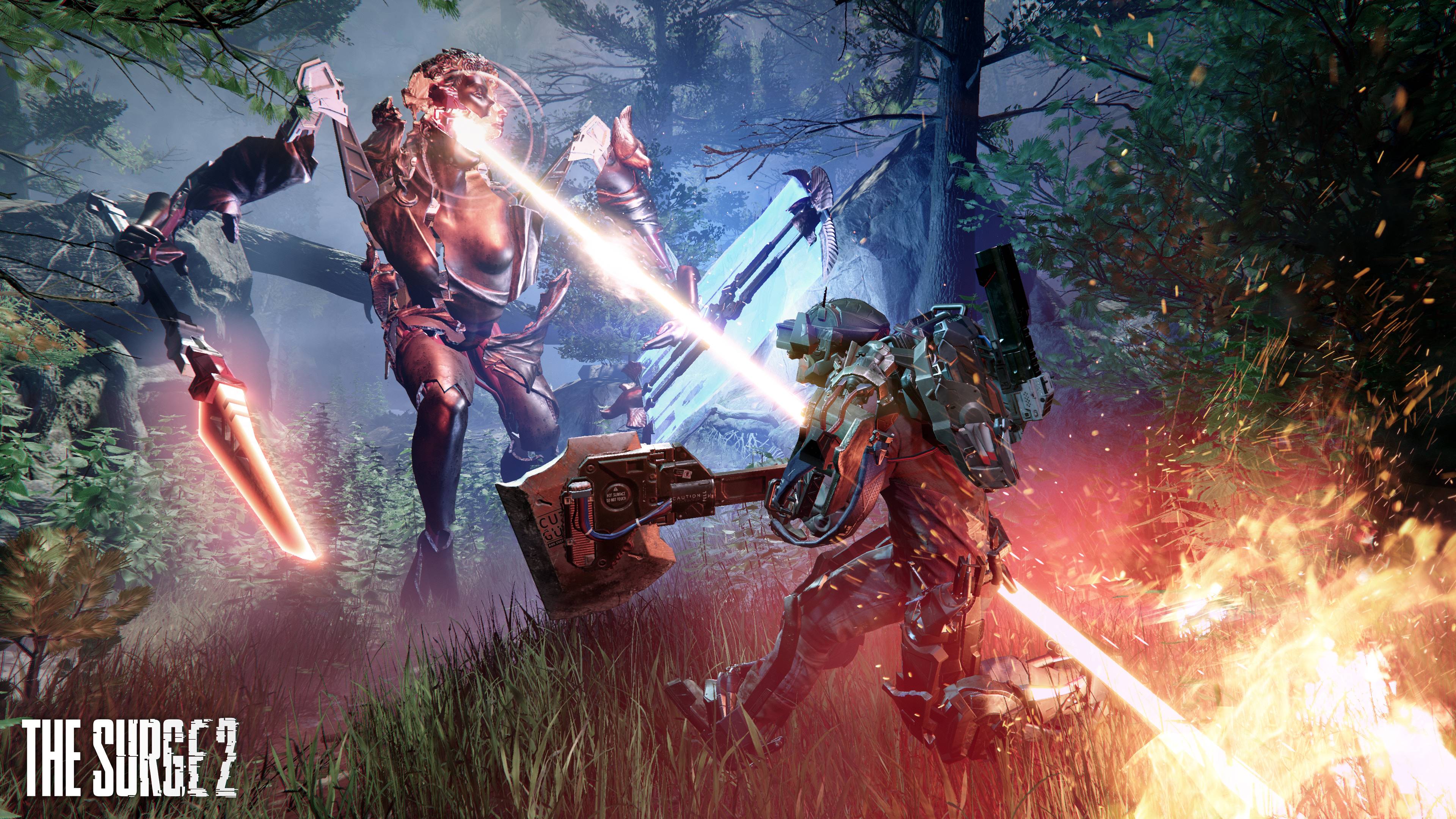 Outside of combat, The Surge 2 mostly follows the standard formula for the sub-genre. It features a huge interconnected world, with several visually-distinct areas—an improvement over the samey industrial corridors and walkways of its predecessor. There's an ocean-side dock area, a metropolitan downtown, and, most refreshingly, a forested nature preserve called Gideon's Rock. With plenty of secret rooms, hidden implants, and cordoned-off areas, the game embraces a Metroidvania-style overworld, with plenty of short-cuts in between. Deck13 has perhaps gone too far with short-cuts, as it's sometimes difficult to remember which path leads to which destination, but in general Jericho City is a worthy Souls-like sandbox.

In several corners of the city are non-combat areas with shops, quest-givers, and chatty NPCs. The variety of quests that emerge from these safe spaces is most welcome. While you're hunting down bosses and exploring Jericho City, you can collect audio logs for an artificially-intelligent vending machine, assemble a set of armor for a bartender with delusions of grandeur, or defend a poor shopkeeper from a loan shark. The only downside to these non-combat zones is their artifice. Populated with stiff characters cycling through the same stilted animations, they don't seem especially organic or alive. 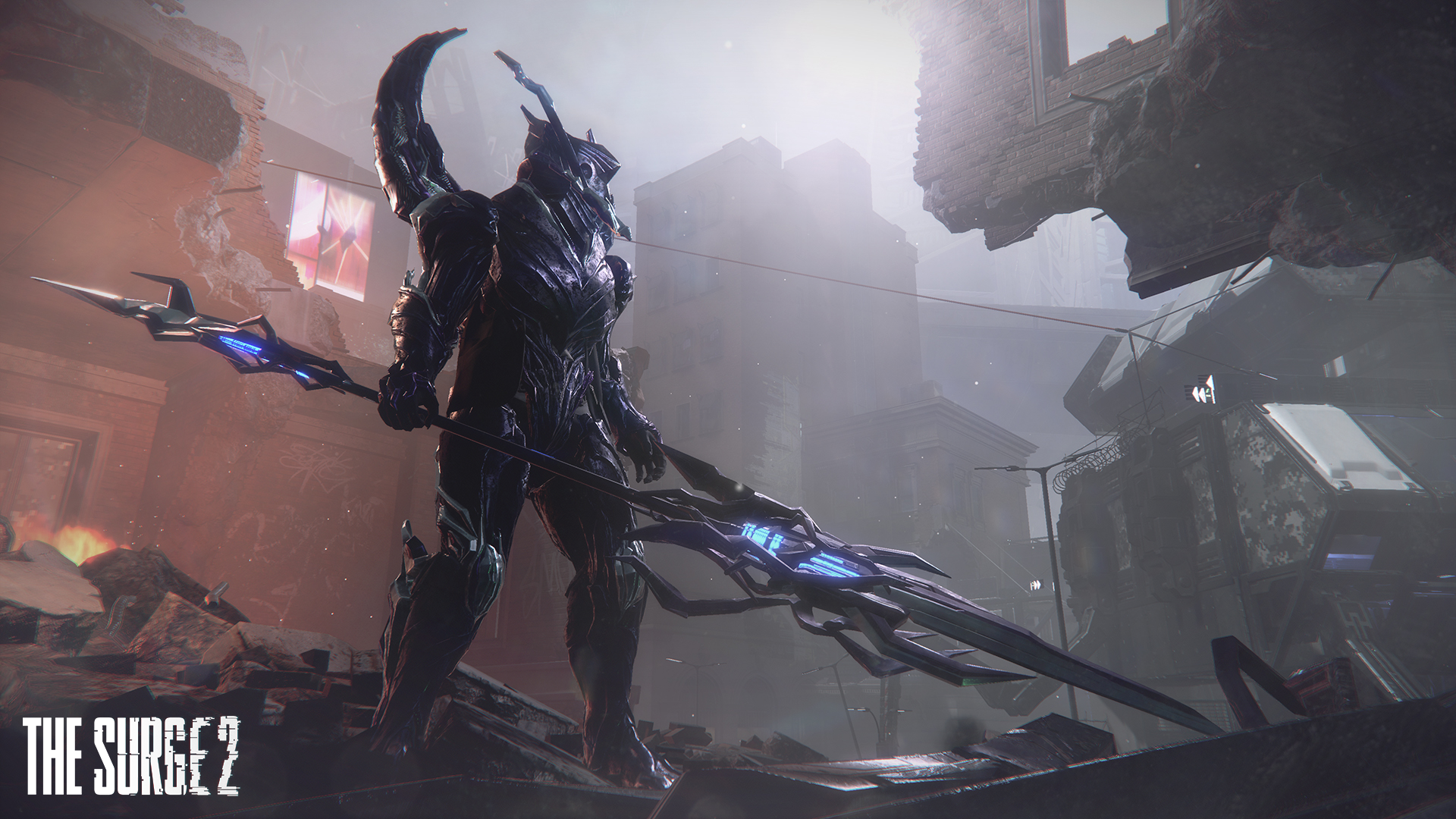 Outside of exploration and quests, The Surge 2 offers a host of character customization options, including an exhaustive character creator, dozens of unique weapons and armor pieces—all upgradeable—and even a few moral choices. The character creator, however detailed, doesn't add much to the proceedings. All the physical components like chin, eyes, nose, and facial hair are usually hidden behind armor pieces, and the backstory you select barely textures the campaign, outside of a few throw-away lines from NPCs.

One area where The Surge 2 greatly expands upon the first game's template is online functionality. Where the original eschewed multiplayer features, the sequel introduces several asynchronous elements that add to the fun. You can use a spray paint drone module to leave pictographs for other players, or defeat "revenge enemies"—normal enemies that have vanquished another human player elsewhere in the world—for lots of scrap. The best feature of all is the banner drone module, which allows you to deposit a miniature rotating image of your character anywhere on the map. After 60 minutes the game calculates how many other players found your banner, and rewards you with scrap accordingly. It's a great source of pride to discover the darkest, most secretive place to place a banner and then learn that only two percent of players actually discovered it. 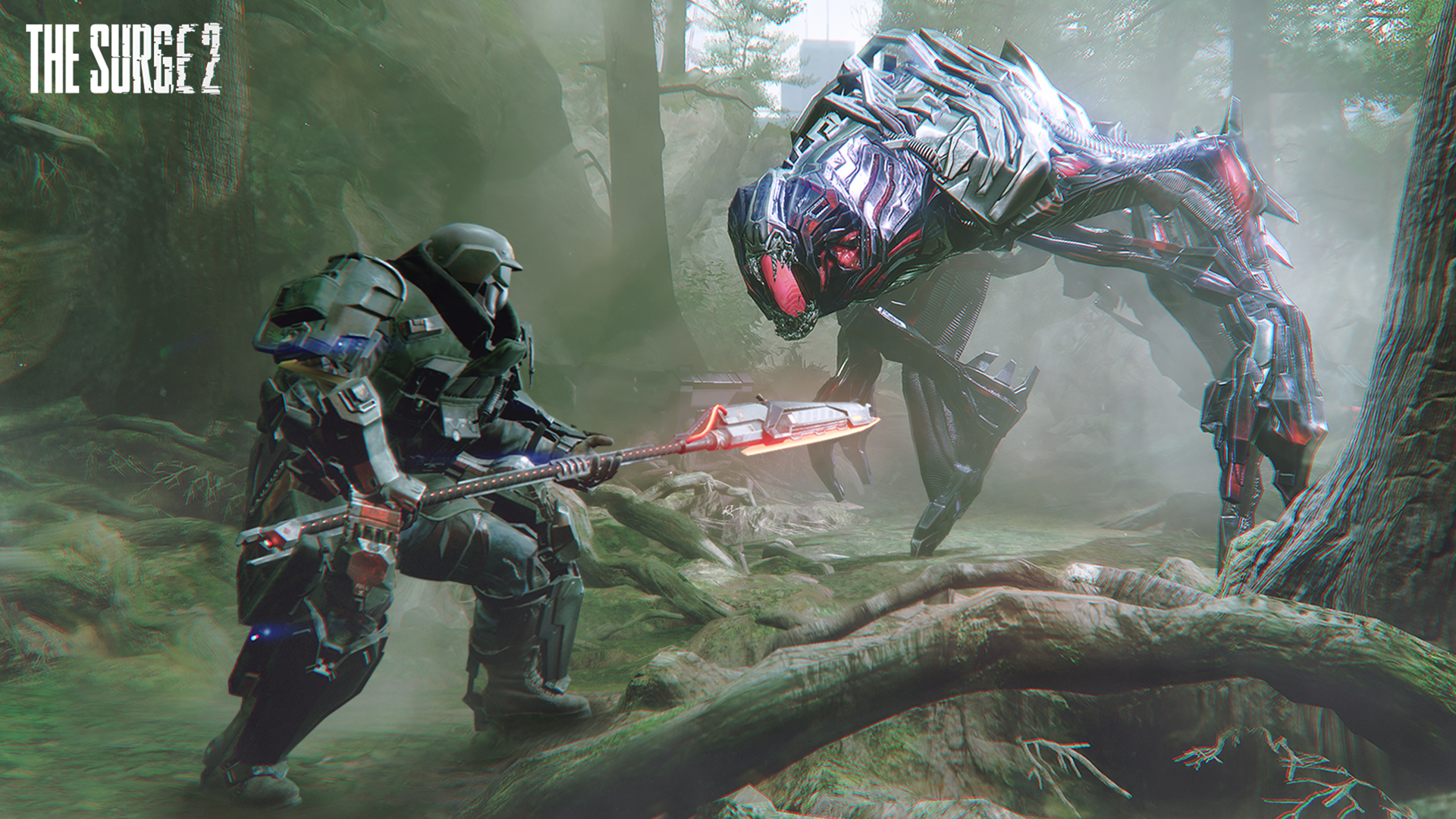 Don't expect any online help with the game's many boss battles, however; you'll be all alone out there. In general, bosses in The Surge 2 are fine, but unspectacular. Two stand out. The first is a nimble mech with three long mechanical legs and five cooling tanks—two on the body and one on each leg—that must be destroyed first. The second is a multi-phase battle with a nanite monster that assumes three unique forms. Others are less interesting or redundant encounters.

In addition to novel multiplayer offerings and a couple of memorable boss fights, The Surge 2 provides several quality-of-life features. Piles of scrap collected in the field can now be banked in bulk, instead of one at a time. Players can convert advanced crafting components to lower tiers at a 1:2 ratio, to avoid backtracking to fight lower-level enemies. The game also supports several customizable loadouts, so you can swap on the fly to deal with different environments and enemy types. Proficiency scaling in weapons is gone, encouraging greater experimentation with several types. 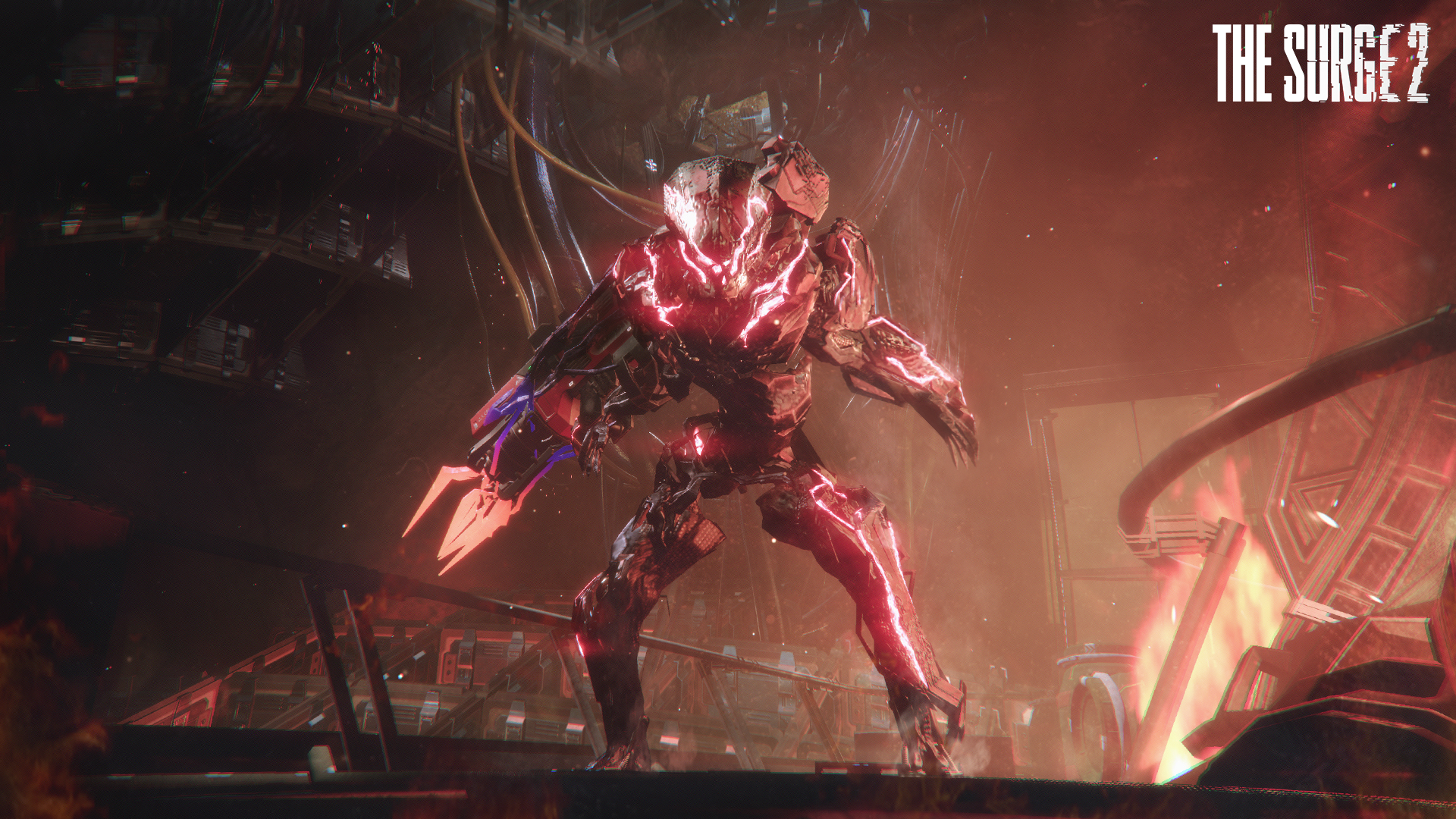 Despite some victories in accessibility, The Surge 2 suffers from a few technical issues. While New Jericho boasts impressive physics and draw distance, its stark lighting, slow-loading textures, and wooden NPCs detract from the overall visual experience.

Once you beat the game, which will take approximately 30 hours—give or take a few depending on how many side-quests you decide to pursue—you'll unlock New Game Plus, which sheds new light on the story and places tougher enemies in different locations. Your gear, weapons, and character progress carry over.

The Surge 2 might not represent a giant step forward for the franchise, but it doesn't have to. Like the overlooked first game, it's an entertaining and engaging action-adventure title with a unique sci-fi setting, rewarding exploration, and a visceral combat system. It suffers from some storytelling and technical woes, and its experiments with a larger, more populated world aren't totally successful, yet in terms of structure, level layout, and moment-to-moment gameplay it earns its place among the better Souls-likes of the last few years.

This review is based on a digital copy of The Surge 2 for the XOne, provided by the publisher.

As you know the original is my favourite Souls-like, so I'm looking forward to play it. Am glad to hear there's more environmental and enemy variety this time around. 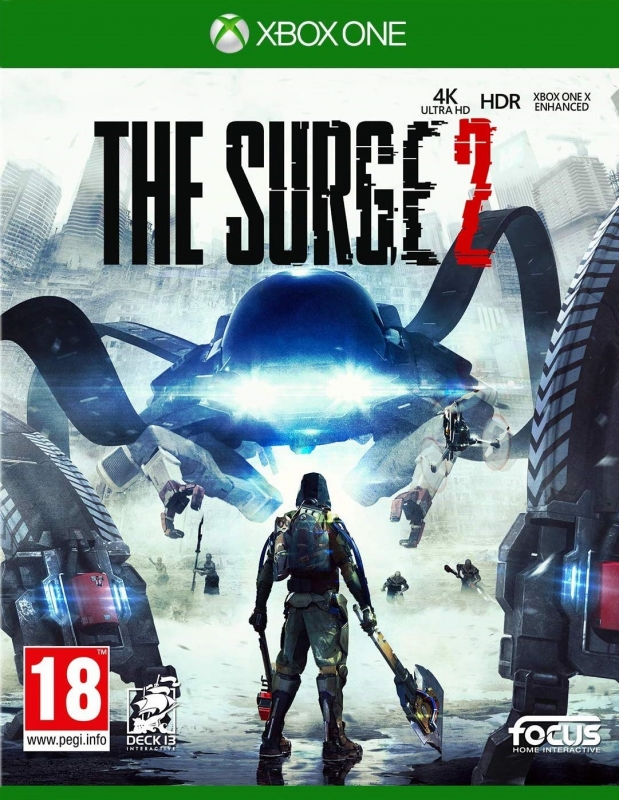 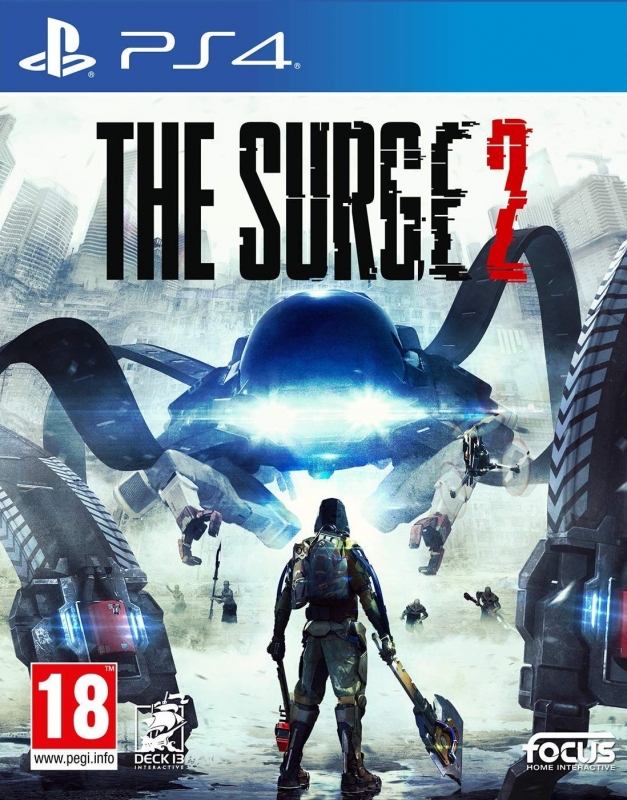