SNK has announced the lineup of games for the NEOGEO Arcade Stick Pro. 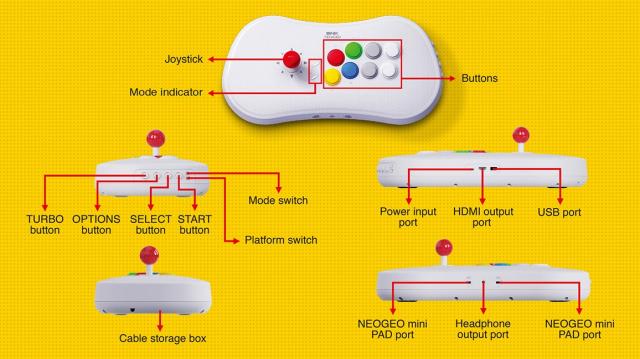 Here is the lineup of games:

Here is more information on the NEOGEO Arcade Stick Pro:

EOGEO Arcade Stick Pro is an incredibly unique fighting stick in that it comes with fighting games pre-installed! It was inspired by the NEOGEO CD’s controller design and was blown up to fighting stick size. (W 430mm × D 215mm × H 125mm) Additionally, the arcade stick can switch between two modes: Arcade Stick Mode and Console Mode.

At the moment, we have plans for a world-wide release. (However, please understand that the specifics may change based on the country.) Please wait for more updates concerning launch date and price.

In this mode, you can use the arcade stick normally by simply plugging it into a NEOGEO mini or PC. We guarantee a solid experience with this arcade stick.

In this mode, simply connect the stick via an HDMI cable into a TV and get ready to enjoy some of SNK’s finest fighting games. There are 20 pre-installed NEOGEO classics just waiting to be played. You can even rearrange the button layout in the options menu. Also, you can attach NEOGEO mini PAD controllers or even another NEOGEO Arcade Stick Pro for some glorious two-player action!

Really need some more variety... could have thrown a metal slug or 2 in there.

I would've defs hoped for Metal Slug too.

The game lineup contains "only" the usual beat em ups but unfortunately no other genres. That's a pity. On the other hand, the joystick can also be used on the NeoGeo Mini and PC, which is a great thing. But with the first one a firmware update is urgently necessary, with which the HDMI image output has to be significantly improved, furthermore a remap function for the illogically placed ABCD buttons is urgently needed.