The Church in the Darkness (XOne) - Review

There are a plethora of ideas around The Church in the Darkness I’d love to deliberate over.  I’d imagine said conversation could fill a two-hour podcast with Church’s game director, Richard Rouse (III).  Because, like the game’s cult, it’s awash in counter-cultural ideals.  In an era of linear narratives and modernized design of AAA studios, along comes a humble indie developer harkening back to unfixed narratives and a game template replicating the original Metal Gear Solid.  The basis on which the game was inspired, the uncomfortable window of morality being questioned, and more well up a yearning for me to think about Church and its intentions.  But I hate how it’s tied to this heap.

The 1970s were a time of political strife for many in the US.  Church’s fictional cult, The Collective Justice Mission (CJM), flees California to make their own home in the stand-in South American country of Battuela.  You play as Vic, an ex-cop who’s tasked by their sister to establish contact with her son, Alex.  How you go about infiltrating this colony will have disparate results for your sister, your nephew, the cult’s leaders, and the hundreds of townspeople.  Combined with the rougelike elements, there’s potential to tackle new hurdles across several playthroughs. 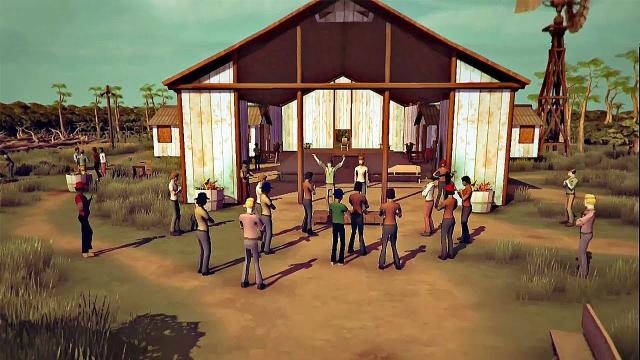 One of the few positives would be the handling of Isaac & Rebekah Walker.  Going back to my recent experience with Sagebrush—another disappointing game centered on a cult, the contrast in making such well-rounded characters lends an air of believability.  From the biblical allusions with the Walker's names to progressive-socialist politics exhibited by real-life cult leaders, there’s a solid effort to lend this colony a sense of place.  Booming voices over the speaker system have an enthusiasm akin to that of Jim Jones’ rants; at the same time, there are some humorous nudges made by the game too, such as Isaac’s somewhat-awkward joke delivery and Rebekah’s out-of-tune singing of repetitive lyrics.  All of which is bolstered by the quality voice acting of John Patrick Lowrie and Ellen McLain.

There’s a nifty gimmick tying the game’s procedural generation to their personalities too.  Any player's first run is a dice roll in two respects: how threatening The Walkers sound and Alex’s concomitant response to said nastiness.  Whereas many rougelikes incorporate new qualities into the player-character, such as Rogue Legacy or Void Bastards, leaving you static (outside of sex & race selection) and the Walker's temperaments up to chance gives a different atmosphere between early runs.  It’s a shame later runs reveal such unsophisticated implementation.

Between their tones on the PA system to scattered notes, it’s not that hard to recognize how Alex will respond to the idea of leaving.  Church’s surface-level usage brings me back to something Warren Spector discussed regarding Fallout 4:  “…their [Bethesda Games’] simulations are an inch deep and miles wide.”  We’re only measuring by yards wide here!  It’s a game that could be completed in less than fifteen minutes; yet, there’s a lacking dynamism in what players can witness long-term.  Alex may sometimes plead for you to “talk” to Rebekah and Isaac but that’s rarely an option; only actions such as knocking out or killing are guaranteed to appear while they yammer on and on.  Characters are static placeholders to provide objectives, with no nuance to exploit for more emergent stories. 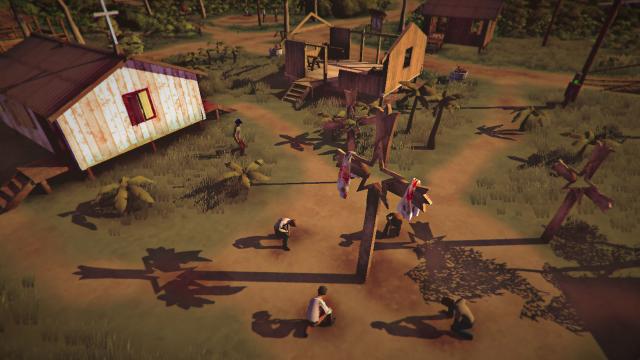 This’ll be a repetitive talking point throughout but it bears repeating: the idea of narrative freedom beyond a singular objective is an excellent one.  The only necessary goal for an end-state is to meet Alex.  Whatever happens before and after can be decided by your whims.  For all of the other stresses incurred, it’s relaxing to know this one task will be the only routine.  The means to do that can be brute force, pilfering randomly-generated items from desks, or greeting a rotation of different support characters.

Having this unmoored form of storytelling works in theory, but there’s no flesh to this skeleton.  You’d think completing tasks for friendlies could net some other benefit for one, especially after narrowing your search for Alex upon initially asking.  You just get a thanks instead.  Imagine how vibrant these emergent stories could be by amassing double agents: one follower knows a secret pathway to get across the map with ease or another disables all alarms within a given area.  Furthermore, why can’t some of the proof of the CJM’s atrocities across the map be utilized for something?  Considering how Church’s structure pushes towards multiple runs, those torture areas eventually become bland window dressing.

Overall, Church’s story feels like a cult-thriller novella stretched to infinite limits with Spore’s design archetype; sadly, it’s the same type of reaction all over again.  “We have procedural generation incorporated into storytelling for multiple playthroughs,” they say with glee.  “That’s well and good,” I hesitantly say in response, “but how’s that handled with managing pacing, themes, and writing to make all those runs feel truly unique?”  No answer.

Gameplay isn’t in a position to take away these sins either; in fact, it doubles them.

Although the original Metal Gear Solid is felt with the camera position and vision cones, this self-prescribed “infiltration-action” title shares DNA with the Hitman series.  Guided by procedural generation, the basic options come down to limited character customization and loadout selections—these increase in variety after completing runs.  The stealth mechanics maintain a basic checklist of avoiding enemies’ sightlines, donning townspeople/guard outfits, utilizing distractions (from inventory or environment) to maneuver around guards, and potentially knocking out or killing them. 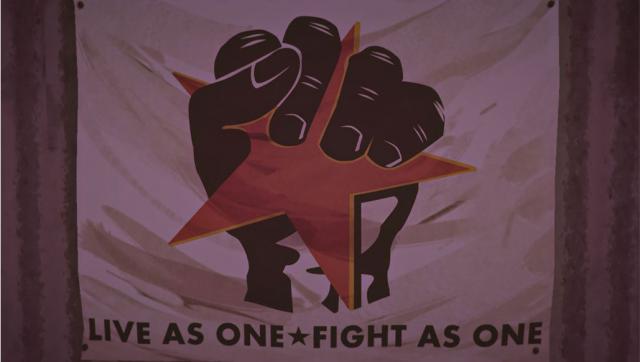 In whole, this expected template would be inoffensive were it handled correctly.  Not the case here.  Elucidating my jumbled thoughts on this can be tough, but I’ll try to succinctly state it like this: it’s been a long time since I’ve had an internal dialogue with myself questioning whether this qualifies as “broken.”  The reason this is tough is because said issues can work for or against you.  Poorly-implemented patrol patterns for some guards aside, I have a tabulated list of abnormalities I had to jot down:

- The transition phases for guards is so ridiculous.  The quick transition from passive, to suspicious, to alert phase ascends and descends so quickly.  You can be caught killing a guard, have another give chase, and successfully hide in a chest while said guard sees you do it.

- A particular run had the end result of emptying the game world in an… unfortunate way.  Out of nowhere, a group of townspeople run through this blockaded church—phasing through the geometry—and switch on the alarm system.  Didn’t they get the memo?  No one else is around.  And how did you even see me when I wasn’t in your vision cone?

- Guards catching you kill someone in a building then subsequently hide can result in them never resetting to a passive patrol.  Sometimes, save-quitting and resetting is a boon because their detection system is effectively shut down and they’re always affixed to that location.

- The ear range for these guards hearing noise-makers is wonky, to say the least.  Any around the fringes of the camera probably won’t hear it until breaking an invisible threshold.  A “sound cone” would’ve been useful to not make their range seem so inconsistent. 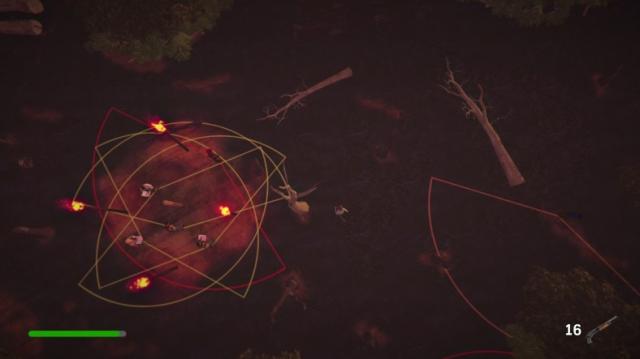 - The Mole difficulty setting (hardest one) is unfair.  It’s one thing to vomit more enemies through critical areas, it’s another to also keep players on edge by randomly hearing the same recycled “huh?” aural queue suspicious guards use.  Further, patrolling routes encircling Alex's house goes beyond the pale of genuine difficulty.  Maybe Paranoid Productions is striving to be coined “The Dark Souls of Stealth Games.”  One issue: it’s not as intricately designed to warrant such a lofty comparison.

- The game has suspicious yearning to accuse you of murdering a cult leader too.  There have been times I’ve merely knocked out and hid a leader’s body yet still hear of their tragic assassination over the intercom two minutes later.  Hell, there have been times I haven’t even met either of them yet and still overhear this news.  It’s one of those weird cases where the game’s design and story clash.

There are some other tidbits but you get the point.  I don’t enjoy utilizing a grocery list to explain my issues, but it feels necessary.  The base mechanics when mobile are still functional; and yet, there are all of these weird issues— many which are ancillary—that are so confusing to process in a traditional fashion. 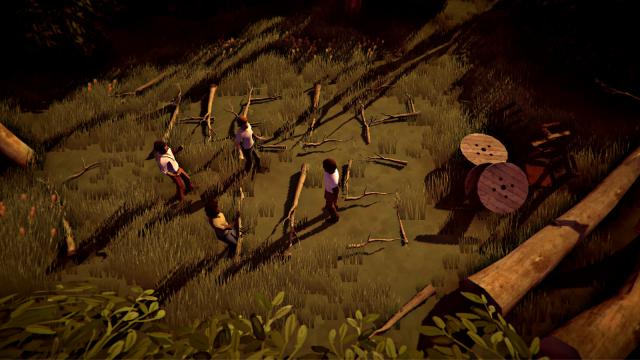 Aside from mechanics, Church also doesn’t have a firm footing thematically.  There’s a distinct lack of design cohesion.  For what’s set up like a hostage rescue with rough odds, any life-threatening risk is a short sprint away.  Oh sure, The Walkers can talk a big game about going on lockdown, but there’s little variation felt from the result.  There’s the potential to commit mass carnage with the game’s sloppy shooting mechanics, but the result is predetermined.  Rather than assessing cult behavior & fundamentalism through game design you’re left with a staid stealth-action game in which some shortcuts, characters, and minor locations move around.

Meanwhile, aspects such as the aesthetic and sound leave a lot to be desired.  Although some leniency can be granted to its basic look for characters with the zoomed-out camera, locales blend together to the point of feeling like quick Unity asset purchases.  Outside of your detailed map, everything about the UI and objective tracker reinforces the notion of graphics being hastily put together.  It’s mildly unpleasant in motion too.  Although I vaguely recall an update, framerate would still periodically fluctuate into the mid-20s (even on Xbox One X).

Sound design is another offender.  Aside from the joke songs by Rebekah, I can barely recall there being a soundtrack.  As mentioned previously, the voice actors for The Walkers are top-notch but no one else is on the same caliber; worse yet, the third most-talkative voice actor is quite bad.  Every time I incidentally picked up Alex’s oral history collectible I groaned knowing I’d have to listen (no option to skip).  Sound design is also an odd egg because it’s often adequate for the jungle environ.  But there’s one dimwitted choice that frustrated me: the constant bleats and moans of townspeople across specific parts of the map.  The game begs to be replayed but the reshuffling of such limited dialogue, crowd noises, etc. etc. could put anyone off discovering the various endings. 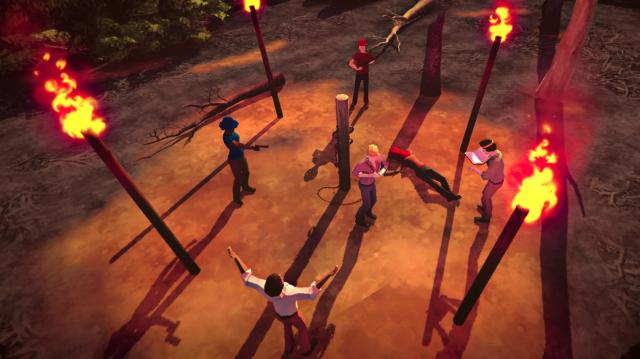 The Church in the Darkness is a fascinating curio and a bad game.  The setting, the unfixed narrative structure, and the examination of Christian cults are creative sparks I can understand Richard Rouse (III) & co. exploring.  In some respects, the writing and main voice acting will hit their strides when spotlighting the cult's fixation on tolerance and socialism.  But everything hinges on treating procedural generation as an end, instead of the means to create a cohesive experience.  Like other prominent sinners of the past, such as No Man’s Sky 1.0, it feels unfinished and disregards sacrosanct tenets that’d encourage players to replay it over and over.

This review is based on a digital copy of The Church in the Darkness for the XOne, provided by the publisher.

I was excited for this game at first, but... Yeah, it's not as good as I expected it to be.