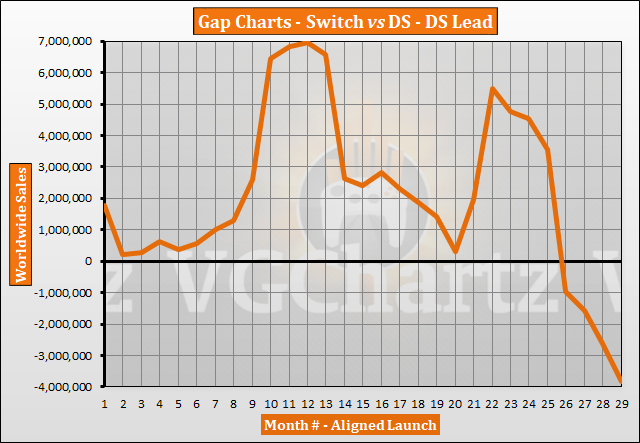 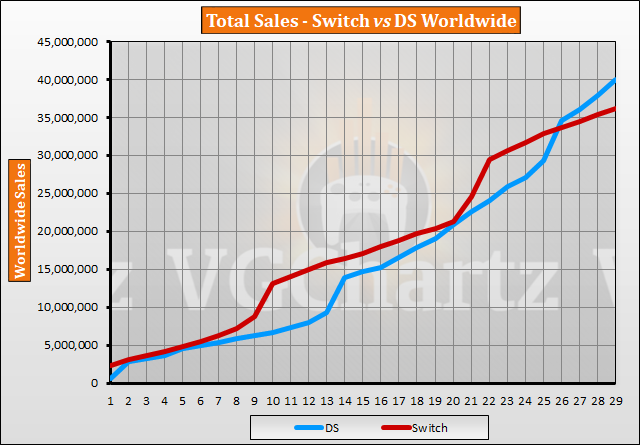 July 2019 is the 29th month that the Nintendo Switch has been available for. During the latest month the gap grew in favor of the DS by 1.21 million units when compared to the Switch during the same timeframe. In the last 12 months the DS has outsold the Switch by 6.13 million units. The DS leads by 3.82 million units.

It may look like the DS has the lead, but they are actually about to adopt a criss-crossing behavior because holidays are unaligned.

I'm not so sure about that. This was when the DS went into hyperdrive and is now 3 months into a 29M unit year. This will be the Switch's best year so far, but it won't get near those numbers.

I'm not so sure about that. This was when the DS went into hyperdrive and is now 3 months into a 29M unit year. This will be the Switch's best year so far, but it won't get near those numbers.

DS is only 4m ahead of Switch right now. Switch will easily pass that during the holidays. Then DS will pass Switch again when the holidays are over.

Last year Switch sold ~11m during it's last 5 months. This year Switch has a much stronger schedule of software releases and a new model that is only $200. Given that, I don't think 14m is going to be much of a hurdle. I think Switch is going to sell several million more than that. YMMV.

Er, no. Look at that trajectory for the DS. Switch may be able to cross it once more, but... This one's not even going to be close.

The beast that is the ds isnt that far ahead of the switch. I know, they launched at completely different dates but, the fact it's still this close is crazy. Just wait. The mini, pokemon, Luigi 3.... astral chain... too many to list. It's still 300 dollars. Way more than the ds ever was. Double the price if my memory serves.... the switch is going to have some great years ahead. That's a fact. To the typical naysayers, just watch. The switch will keep it close.