Remnant: From the Ashes (PC) - Review

What started with Demon's Souls in 2009 continues to this day with games like Nioh, Sekiro, The Surge, and many more with no signs of slowing down. The latest is Remnant: From the Ashes from Gunfire Games - the studio best known for titles like Chronos and Darksiders III. Although these titles have not placed Gunfire Games at the fore of gamers' minds, Remnant will help change that. With its more accessible mechanics, terrific presentation, superb mesh of genres, and randomly generated worlds, Remnant is a pleasant surprise and proves that Gunfire Games is a developer to watch moving forward.

Remnant's story takes place in the same universe as Chronos. Fortunately, you won't have to play Chronos to enjoy the narrative. After you create your character with a basic editor, you end up washed ashore on an island with a mysterious tower. As you make your way through the island, which acts as a tutorial, you are ambushed by tree-like creatures and are saved by a group of people from a place called Ward 13. Once there, you quickly learn the denizens are seemingly the last remnants of humanity in a post-apocalyptic world, hunted to near extinction by the tree-like species, The Root, who have invaded from another world. Essentially, your larger mission is to find Ford - the former leader of Ward 13 who has recently gone missing - and figure out a way to defeat The Root. 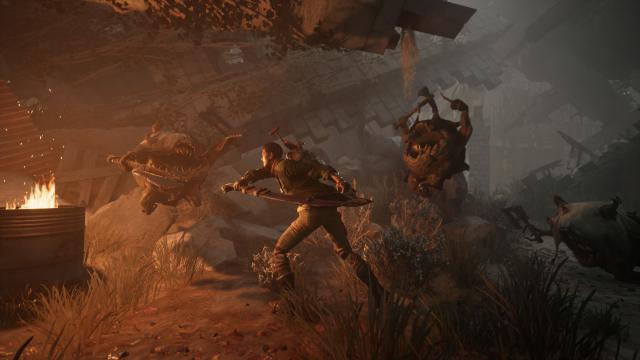 Clearly, the story is pretty basic, but the lore is surprisingly deep. Even if you're unfamiliar with Chronos, spending time to read bits of information from computer terminals, diaries, and conversing with different characters will help you appreciate the universe Gunfire Games has crafted and unravel the mystery of The Root further. Exploring also helps with unique loot. Characters you meet will primarily be regulated to Ward 13 and generally act as vendors. You have dialogue options with a few of them, but they don’t play too big a role in the events.

The story takes a backseat to the gameplay itself though, and here is where Gunfire Games really shines. Remnant is a third-person action RPG shooter that’s clearly influenced by the Souls games among others. Like Souls, there's an endurance meter you need to manage along with punishing gameplay. Normal mode is easier than similar games, so if you're a Souls veteran, Hard or even Nightmare is probably more suitable.

Elements that make Remnant more accessible include the fact that you don't lose anything when you die. Save points - World Stones and World Shards here - are also more abundant and can be found at the start of every area. Both World Stones and Shards allow you to fully heal, restock ammo, replenish Dragon Hearts - which you use to heal or revive team members - as well as allow you to teleport back to Ward 13. World Stones further allow you to teleport to other World Stones. The areas are also straightforward, with a map that you can pull up, making it impossible to get lost. Battles are also primarily with your firearms, making it harder for enemies to get at you. These changes certainly make things more digestible and dying less frustrating, but the challenge is still there. 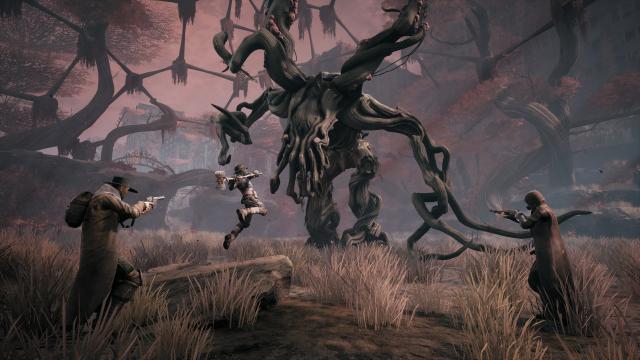 Early on in Remnant, enemies are pretty simple but can overwhelm you if you're not careful. As new varieties are introduced, you really have to adapt and approach enemies more tactically. For instance, in the swamps of Corsus, you’ll have to deal with some enemies charging at you from the surface while others dig under the swamps to get at you. In the temples of Yaesha, you might find the undead slowly ambling towards you joined by several faster ones that blink at you. The variety and amount of enemies ensure battles are often dynamic, chaotic, and unpredictable especially with a full group of three players, as the challenges scale automatically.

The difficulty is even more pronounced with the vicious bosses. Often, these encounters are a real treat to play as constant defeat by the same boss leads to gritty determination, while finally defeating them results in immense exhilaration. These highs and lows mirror those of the Souls games well. A boss of note is Ixillis, a giant flying insect with a scythe, who you battle on a narrow bridge. Dodging, timing your attacks, and being mindful of your environment all come into play even before a second Ixillis is summoned to join the fray. The final boss is also a highlight, as you struggle in an epic, multi-stage battle during the climax. Quite a few of the bosses do spawn a lot of minions that come after you though. This makes things extremely frustrating as you have to deal with a lot on screen at once.

Fortunately, Gunfire Games makes sure you have every opportunity to be prepared against your adversaries with weaponry, abilities, and traits as part of your arsenal. There aren't a terrible amount of guns in Remnant, but each plays differently and is extremely satisfying, feeling weighty and powerful when you fire them. Guns are simply divided into Long Guns or Hand Guns. Melee weapons are also here but clearly they're not the focus. There’s also armour which is worn on your head, chest, and legs and provide the usual defensive stats. You can find armour sets hidden that give further bonuses. Equipment can be bought, crafted, and upgraded with materials you find as loot back in Ward 13. Most guns play as you might expect; the sniper rifle is excellent at range and exploiting weak spots, while the shotgun decimates enemies up close. 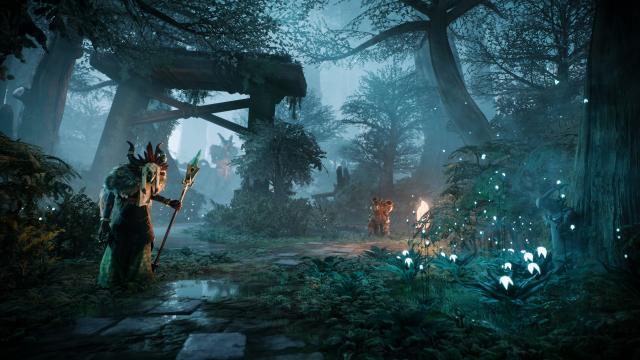 Weapons can be augmented with a Mod, which provide unique offensive or defensive abilities to further give you an edge or get you out of a bind. These Mods are charged as you deal damage and give you more ways to approach challenges. Rattle Weed, for example, shoots out a plant that diverts enemies away from you, forcing them to attack it instead. This gives you time to reload, regroup, and reposition as needed. Beckon is another very useful Mod that summons flying skulls that attack your enemies. Mods add another layer of strategy and it's fun experimenting with them to help on your quest.

To further supplement you, there’s a progression system with Traits. As you play, you’ll unlock trait points which provide certain stat boosts. There are only three initially, but as you play, more become available. These Traits allow you to further customize your character to suit your own playstyle. It’s straightforward and works really well albeit simplified compared to RPG systems in some other games.

Because the worlds are randomly generated, you won't be able to craft every weapon, mod, and armour in one playthrough, as you won't fight every boss and see every scenario. Remnant is a game that has a ton of replayability and no playthrough is going to be the same. This keeps things unpredictable and really does make you want to explore. However, the randomization does make it so that some parts are a bit too easy while others are too difficult. Gunfire Games addresses this by scaling the difficulty based on your equipment levels, but it's not perfect. On top of all this, you can reroll your campaign at anytime at your World Crystal in Ward 13 and face different challenges. To help see other bosses, you can easily join other games with friends or strangers as well. 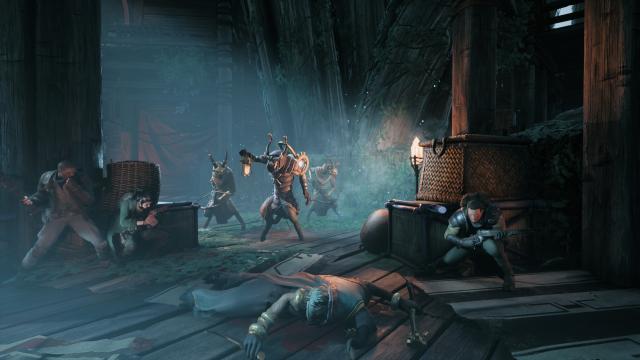 Hopping into another's game seamlessly is another key strength for Remnant. When you join a game you continue on the campaign where the host is but keep your own items. Loot is automatically shared amongst your party. It’s all streamlined to keep you in the action and you’ll have to be, because the difficulty ramps up by itself as well. However, playing together is more rewarding and enjoyable. There are even secrets that are only accessible with more party members. Some issues do show up in multiplayer though. Despite being a cooperative shooter, there is no way to communicate via voice or text in-game. There aren’t even any sort of emotes to use either. This makes it difficult to plan out strategies together, particularly for boss fights.

Although the main attraction for Remnant is to cooperatively shoot and overcome your enemies, it is supported by strong presentation as well. Graphically, Gunfire Games makes the Unreal Engine shine. It runs well for the most part, but there are FPS dips in more chaotic areas. Each of the four worlds is also very different. Earth is filled with the Root’s pestilence, as deserted buildings and cars are entwined by overgrowth. Rhom’s deserts offer primitive villages as well as high tech temples underneath. The sweltering swamps of Corsus are filled with insects and steam-powered devices. Finally, the lush jungles of Yaesha are filled with vibrant plants, with ziggurats dotting the landscape. Gunfire Games does an excellent job of making sure the worlds look and feel different.

Audio design is also very strong. Enemies and weapons all sound different. What stood out was how ambient sounds enhanced the experience. On Earth, you could hear footsteps of enemies echoing from different floors, which made things even more atmospheric. Voice performance is sufficient and helps fill out the characters you meet. Music is used sparingly but does its job. The main theme is quite catchy and instantly familiar to those who have played Chronos. 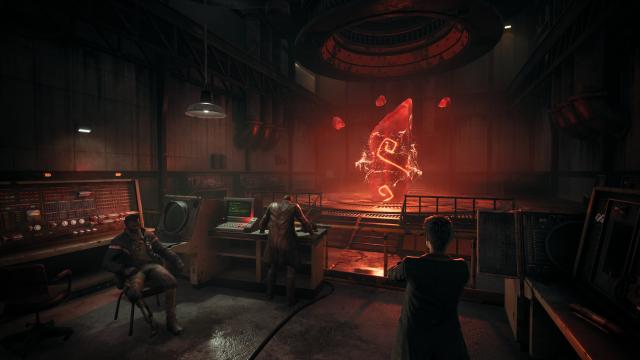 Remnant: From the Ashes is Gunfire Games’ best effort so far and punches high above its weight class. High replayability, with seamless cooperative action, combined with terrific presentation and implementation of various Souls systems results in a game that is fun, exhilarating, and rewarding. In a summer of smaller releases, Remnant easily stands with the best of them.

This review is based on a digital copy of Remnant: From the Ashes for the PC, provided by the publisher.

Great read. I have played most every Soulslike, even some obscure ones like Dark Maus and Momodora, as the genre really appeals to me. I was looking into this game the other day but the reviews I read weren't as convincing as this one here. I may decide to give this a shot, if I don't wait for it to be on sale.

I really like the look of this game but can't honestly spend £32 on a digital only game, because my inner mind goes "what if I don't like it?" I'm stuck with it you see. No fault of the developer or the game, personal issue. I hope it gains success and a good player base. 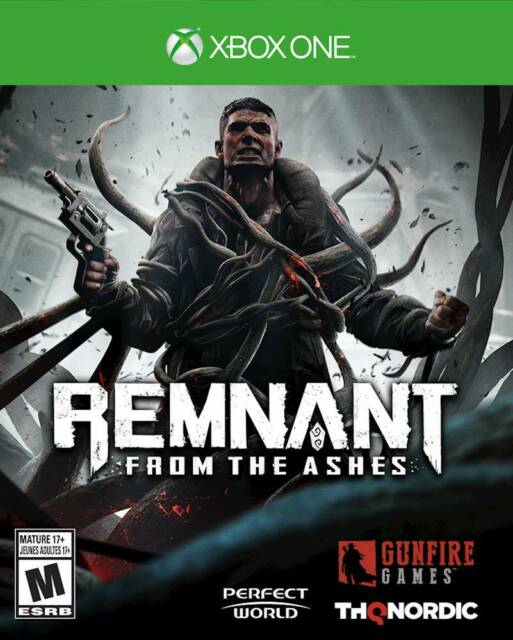