Square Enix previously announced Final Fantasy VII Remake will be a multi-part series and now in a recent blog post confirmed it will still be released in multiple parts.

"For Final Fantasy VII Remake, which will be reborn on PlayStation 4, there is a lot of content to review in doing a full remake, and production is underway as multiple parts," said the company. 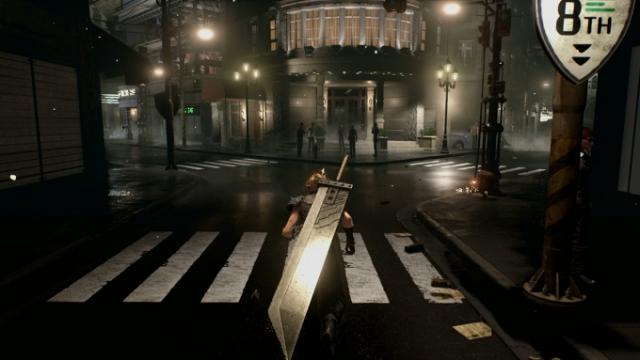 Key staff from the original release have come together to bring you Final Fantasy VII Remake. With its epic story, captivating characters, and cutting edge technology that defined an era, the beloved classic that won the hearts of many is finally ready to be reborn.

Final Fantasy VII Remake is in development for PlayStation 4.

I just hope that when they release all the parts/episodes that they make it into one continuous package. I don't want to have to figuratively "swap discs" like in the original.

PS4 and XONE games usually are installed in the hard drive of the consoles, no need to swap disk. Have you played RDR2? Came in 2 discs but no disc swap, cause it had to be installed.

I'm okay with this. I don't think it'll do the game justice to compact it into a single game. The story is far more complex and in-depth, also a more fleshed out Midgar could be as big as RDR2, and then there is the world map which is pretty much a planet size area to explore. I just don't think it's possible to fit all that in a single game and call it complete.

This logic is flawed. How do you recreate an open world in the form of chapters without restricting areas? Ridiculous.

Holyshit, you calling me ridiculous.. Did you know the original FFVII came in 3 disc on PS1? We didn't get to completely explore the world until we reach disc 3.

I wasn't calling you ridiculous. I'm calling a chapter based RPG ridiculous. I'm a huge fan of the original and don't agree with your argument that it can't be done in one full game. It's a money grab pure and simple. Have a great day :)

Haven't heard of quad layer blu ray huh? Sorry, it's a cop out and your hope and greed lay with the fan base picking this up. Any suckers out there wanting to pay $50 each?

The issue isn't how many GB they can fit on a disc, but how much work they have to put into recreating a world that was MUCH simpler to create in the 90's with pre-rendered backgrounds, etc. If you create a new game from scratch, you can work around and avoid design issues in a way you can't when you already have a determined blueprint created by a team who 20 years ago never considered that a new team would be tasked with recreating it all in modern real time graphics. Add to the fact that they're also going to be adding substantial new content to the Midgar section (and probably many other areas), allowing the player to visit every Sector this time, among other things, then yeah, this game may very well need the budget of several full scale games.

At least make a version of FFVII with all the chapters together after it's all out, then.

Welp, I guess I'm out then. Not a big fan of waiting for parts and paying more as time goes on.

Surprised you said that.

Then I guess you're going to have to take pot shots at anyone else in that thread, who actually put their own money into that game :-D

More hilarious that you feel the need to jab all the time though.

Could not resist because your comment was Impossible for me to pass, because you defended a scam that used a glorified tech demo to suck Money out of people since 2013 or something. But now you Said this weird thing , you know it would be three full games , why shouldnt people pay for full games. And this is full games, not patches for a tech demo.

Couldn't resist being a classic nonce for no reason, other than to hold a personal grudge?.

No, I didn't defend a "scam", you think it's a fact that it's a scam when it simply isn't, but hey, I'm not going to stop you and a few here believing in lies and deception, from a crowd that clearly isn't at all interested in the god damn game, whatsoever.

I knew it would be split into "parts", which was years ago (makes me wonder why it's taking so damn long with such an "amazing" studio behind it, publisher and backing). I thought that at least by now, they wouldn't be so stuck in the past, with splitting a game that had to be split up in the past, to be split up now, because apart from Hitman doing it directly on purpose, who else has released an RPG split into multiple parts?. I'm talking more than just 1. It's definitely not "normal" to do what had to be done in the past, today.

"no patches for a tech demo", you mean a game, that you have access to, but don't care to, because you clearly don't care about the game at all, other than to scoff at it and downplay whatever it could possibly do, as you do.

It's only going to be a matter of time before desiring to jab someone over calling a game a "scam, without actual receipts and actual admission from the devs, is going to become suspension worthy here.

My brother Lost 6k to a Ponzi scam . He talked like you defending his "investment". Dont worry the Money Will soon end and the bubble Will burst.

Honestly mate, I don't care. because I've not put any money towards said project, so I've nothing to actually lose.

I bet you'd be smiling at backers losing money though, for some petty reason.

I hated this when first announced, now though I've accepted it. Once all three parts are out it will probably be a longer game than the original.

LMAO, I knew it! Yikety yikes.

It's ok, I'll wait for the full game to come out before I buy it. Also it's funny how every article and every news on this game that's released, always makes the same mistake. What's the big wording that was said in the original ff7 remake trailer, that everyone forgets ? Its these words " play it first on ps4 "
Meaning it's not a ps4 exclusive

Sounds like 10+ more years until all finished. Stupid square enix with its ridiculous dev times. Put less effort into graphics maybe! FF15 looks alrdy dated so pointless efforts. Besides those console garbage cant handle them with good fps anyway. FF15 was unplayable on ps4. Because of these pointless graphics.

The thing is this means they REALLY need to make sure this game meets a near perfect level of quality now. Everyone will have the notion that they're paying for a game 3 plus times over no matter how you slice it. They mentioned they will be full sized games akin to the 13 trilogy so there's no reason to expect they won't all be $60 when they come out. Even if you accept it and are fine with the idea, you can't say that the idea doesn't rub you in a wrong way. Then there's DLC...dear god with this model they can't do that to the gamers, any and all DLC needs to be free...

*More than likely 3 times at minimum

This is a PS5 launch game no?

You know what... I actually prefer that. We're probably only going to get one remake of this game in our lifetime. At least involving key members who worked on the original. So I just want it to be as good as possible.

Not the news i wanted to hear. I am also guessing that each part will be sold separately?

So the downvotes are gamers who want there games cut up into pieces? I am a little surprised.

I think the downvotes are mostly a reaction to your Sherlock Holmes skills of deduction.

@Hynad Thats not how it reads at all. And why cant Squar release the other chapter's for free for those who brought the 1st part? This is no different than milking.

Yes, well I expected as much, this is their guaranteed cash cow. I don't like it though, people complained that FFXV needed dlc and patches to get the full game. Here we have the remake of a 22 year old game being broken up and sold in parts. They may not be so confident to do this with a brand new FF yet, but it seems like highly anticipated remakes and maybe eventually new FF games will be episodic.

Don't really see why people have an issue with this. Just wait for the whole thing to come out and done.

How do you recreate an RPG map with chapters? It's fair to skeptical. "Sorry your airship can't fly to this part as that chapter isn't out yet"

Yea I get that and I agree it would be a bit annoying but that in the grand scheme of things is a small complaint for what we are getting (IMO). Once the game is fully released that should go away and that's when I plan on getting the game.