Attack of the Earthlings (XOne) - Review

Attack of the Earthlings is a dark, turn-based stealth tactics game, with a unique narrative approach; players follow the 'Swarmers', a small alien race that is tired of humanity mining its planet for resources, rather than the humans. So while the player moves the aliens each turn, the AI takes on the role of humanity and moves those units each turn, typically in a predictable pattern.

Controlling the ruling Matriarch, you upgrade your forces by tactically taking human enemies out stealthily and then gobbling them up to gain 'Biomass', which allows you to give birth to additional units. Eating the resulting human corpses also means that when other human units walk past they’re not suspicious, because there’s no dead body... just a puddle of questionable blood.

The name Swarmers is fitting, because the race you control is best at taking on individual humans in mobs - in a one-on-one engagement the human unit is likely to prevail. As such you're encouraged to use all of the stealth mechanics the game provides you with to dispose of the humans. That means hiding in vents, boxes, and around corners. Players also have to consider when to attack and when to hold back for a better opportunity (if you’re close to other humans then the screams of terror from your chosen victim will alert his or her allies), although at times co-ordinated group attacks will allow you to take out multiple humans without causing a wider ruckus. 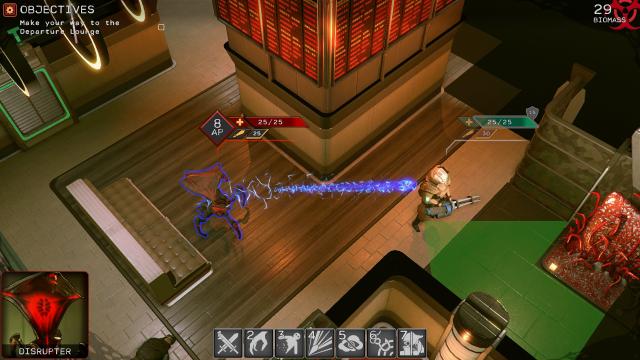 Luckily, as you progress you also unlock upgrades for your units. For example, one upgrade allows you to absorb bullets, another allows you to hit from afar, but perhaps the most useful skill is the overwatch one - this sets you up to attack on the enemy's turn, allowing you to craft nasty ambushes. You can undo any purchased skills as well, allowing you to experiment with new abilities without completely committing yourself to them.

Attack of the Earthlings consists of seven levels, commencing at the bottom of a massive drill and gradually working (or eating in this case) your way up. The first couple of levels are pretty straight forward, serving as introductions to the basic mechanics, but as the enemies get stronger and crack ninja units get involved things get a lot tougher and you'll be required to properly think out your moves. 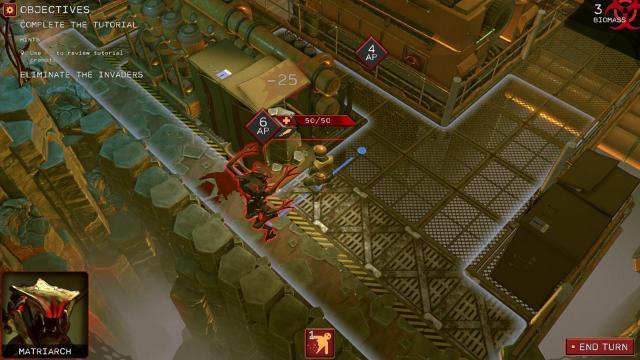 One of the best things about Attack of the Earthlings is its sense of humour, from the comedic way humans die to the ongoing complaints of the boss whose workers are mysteriously going awol at a frustrating rate. There are also neat nods to other video game eccentricities, such as the boxes which just so happen to be the right size for every unit to hide in.

The major drawback to the title is its slow pacing, which extends to the actions taken by units when it's their turn to play them out; I frequently found myself annoyed by the delay between inputting commands and units following them, such that I would sometimes mash the buttons in frustration. On top of that there's a distinct lack of difficulty settings, which is highly disappointing.

At its core Attack of the Earthlings is a fun tactics game with a great sense of humour and a unique twist on the alien invasion trope that allows you to play around with unique abilities, making it a solid pick up for fans of the genre.

This review is based on a digital copy of Attack of the Earthlings for the XOne, provided by the publisher.

Attack of the Earthlings

Attack of the Earthlings