Degrees of Separation couldn't have launched on a more perfect day: Valentine's Day. With its couch co-op campaign, approachable puzzle-platforming, and romantic narrative, it's an ideal match for a day organized around couples. Yet for all its good points—an earnest story, local multiplayer, and some clever puzzles—the game never leaves much of an impression. Its storytelling, while sincere, is hampered by some melodramatic narration. Its fire-and-ice world, however visually arresting, is stretched too thin across several disorienting non-linear environments. Finally, its collection of brain-teasing puzzles can land on the fussy side, especially when playing solo.

One of the many ways developer Moondrop advertised Degrees of Separation was by name-dropping the game's writer, Chris Avellone. Known for writing Planescape: Torment, Fallout: New Vegas, and Pillars of Eternity, Avellone is a big deal in the industry. Yet his work here is forgettable. The game's premise is excellent—two opposing elemental souls, one named Ember from a world of heat and fire and one called Rime from a land of cold and ice, discover each other but can never touch—but the moment-to-moment writing is lost to melodrama and stale metaphors. 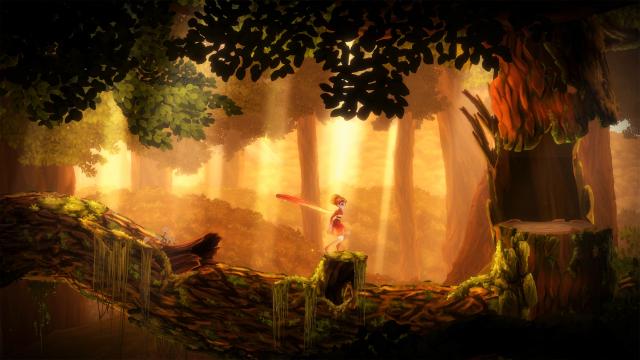 One area where the writing succeeds is by mirroring gameplay shifts. Where many video games go back and forth between their narrative and mechanical demands, Degrees of Separation finds a way to introduce new puzzle conceits and develop the relationship between Ember and Rime at the same time. For example, in one realm Ember and Rime will explode apart if they near each other, breaking open barriers and propelling each other across wide gaps. This explosiveness reflects an argumentative, distant period in the couple's young relationship.

These different gameplay hooks, one for each realm, go a long way to keeping the game's platform-puzzling interesting. At first you'll simply play off each hero's elemental properties—Ember's half of the screen activates steam jets, for example, while Rime's half freezes water, making it walkable. You'll need to move both into the correct position so that Ember's warmth doesn't melt the ice or Rime's cool touch doesn't deactivate the jet. Later, players can form a solid bridge (again a visual metaphor for the relationship) along the line that separates their opposite worlds. Toward the end of the game, the elemental background will shrink to an individual aura around a ball-and-chain, which each character carries with them. 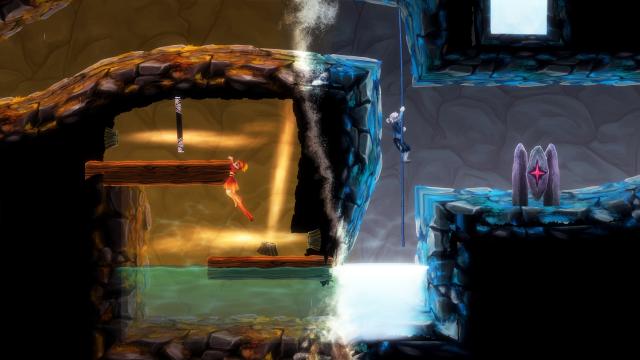 The most engaging set of puzzles, ironically, comes during the game's final realm where elemental properties are stripped from Ember and Rime altogether. There are still areas of heat and ice, but they're environmental fixtures. In other words, the characters don't carry half the puzzle around with them, as they do for the majority of the adventure. A lot of fussy pixel-perfect shuffling is lost here. However, it's still sometimes a nuisance for a single player.

Degrees of Separation, from its core mechanics to its plotline to its very intentional launch date is about two-person gaming. One party controls Ember and the other controls Rime, hopefully in total harmony but probably at least once or twice in bitter recrimination. With only a single soul controlling both characters it's simply inferior. There are tools to help—the L button swaps heroes and the R button "calls" the other to follow—but the stop-and-start rhythm of one-player action makes some already finicky puzzles even more fastidious. There's a stretch in the final realm where one character on the top of the screen must push a wagon filled with elemental ice while the character on the bottom runs along its frozen wake. This is a tall task for a single operator. 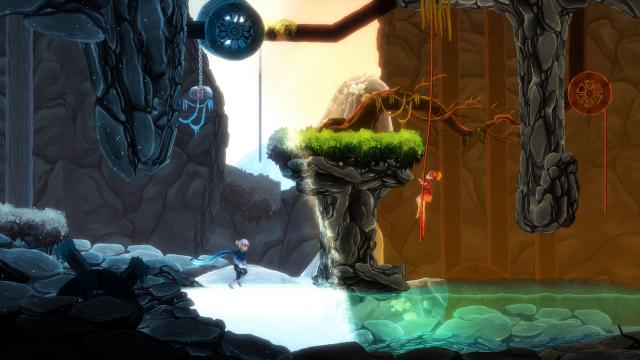 Another tall task, for one or even two players, is navigating the game's weirdly large, meandering realms. Instead of a straight shot from beginning to end, most of the sub-worlds in Degrees of Separation have many disorienting branching paths. They're so big and sprawling, in fact, that each has a dozen or so warp points that connect distant spots on the map. It's a strange design choice for a puzzle-platform game; it only makes finding every collectible scarf more tedious and doubles the chances of getting turned around or lost. Luckily, you can skip a good amount of scarves and still unlock the final area. This is one of the title's most generous gifts.

Its other major gift is a winning storybook aesthetic, its playful use of intermingling fire and ice imagery, and a soothing, romantic soundtrack. Some character animations are stiff—almost like marionettes—but for the most part there's a charming earthiness about the visuals and sound in Degrees of Separation. 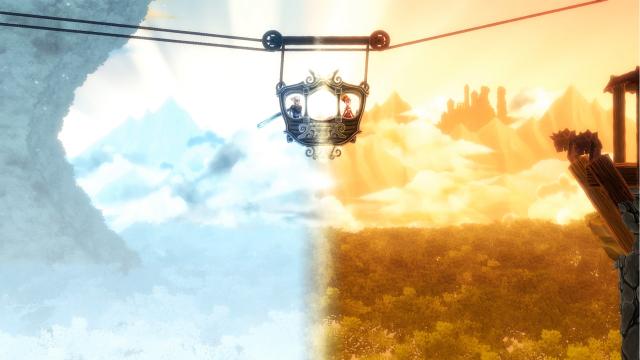 If you want to celebrate a relationship (or put one to the test), Degrees of Separation isn't a bad choice. It's just an unmemorable, undistinguished one. Its puzzling ideas, art, premise, and characters are full of potential, but its level layouts, solo play, and narration full of inconsistencies. In this Valentine's Day metaphor, it's six roses short of a dozen.

This review is based on a digital copy of Degrees of Separation for the NS, provided by the publisher.