The market for otome visual novels seems to have expanded tenfold in the west over recent years and Vita has very much been at the forefront of this, starting with Code: Realize in 2015 right through to the Psychedelica games this summer. Yet these titles all share one thing in common, namely that they were published by the same label in Japan (Otomate), making Karin Entertainment’s London Detective Mysteria an interesting proposition that I was eager to sink my teeth into to see just how different another developer’s take on the genre would be. 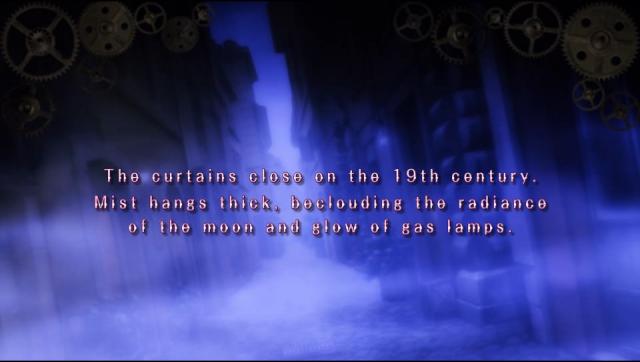 Comparisons to Code: Realize are easy to make at first glance thanks to their similarity in premise – both games are set in Victoria-era London and star a cast of fictional heroes from the era (many of whom become love interests as the plot progresses), re-designed for modern Japanese audiences. The commonalities pretty much end there, though, as Mysteria quickly establishes its own identity that I found myself engrossed in, save for a few questionable issues with pacing.

Here, you play the role of the heir to House Whiteley – a young girl whose name defaults to Emily (although you can pick your own if you prefer). Despite being of royal birth she’s a likable character who is fully fleshed-out, rather than being a self-insert blank canvas; she prefers to eat unhealthy foods and get into trouble for not observing the proper traditions of the time. An early chance encounter with the sons of Sherlock Holmes and Dr. Watson, alongside Queen Victoria herself, leads to Emily being enrolled in a detective course at Harrington Academy and with this the game’s true identity begins to show. 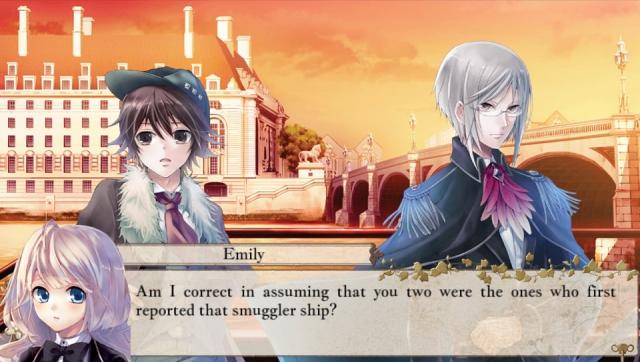 Mysteria is structured into chapters and generally each one follows a different case that Emily, along with a group of her eclectic classmates, will investigate. This is where the historical figures come in. Her detective class is comprised of people like Herlock Holmes (son of Sherlock), Lupine (who as you can guess from his name, may have a connection to a famous fictional French thief), and an aloof individual named Jack who sleeps all day because he’s been up all night...

Surprisingly, there are also a couple of fairly prominent female side characters that I enjoyed interacting with too, the main one being Sara Marple, who is related to the famous sleuth Miss Marple. The reason this is worth mentioning is that I feel otome games often have under-developed female side-characters, so it’s nice to see Emily have friends outside of her romantic interests (they have their own story routes too, although I wasn’t a massive fan of the young cutesy housekeeper Hudson, who felt particularly out of place in 19th century London). 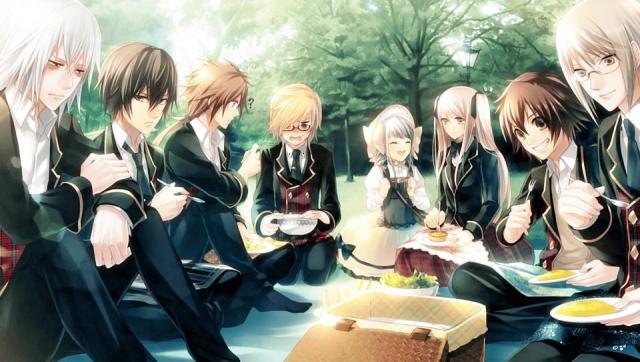 One of the things Mysteria nails the most is the sense of camaraderie in this eclectic class. There’s a moment well into the common routine where they go for a picnic that seems to serve no purpose other than to character-build and it’s such a sweet scene, as you gather up your friends to share a group meal together. There’s a whimsical charm to the game at times that reminds me of series such as Atelier, simply following the lives of a likable cast as they go about their day-to-day business, although here this often gives way to more conventional drama as things progress.

As the title and premise suggests, the bulk of the plot does focus on detective-esque mystery and I found the main story engaging enough to keep me reading. There’s an over-arching framing device of Emily trying to find out details about her parent’s mysterious deaths while progressing her studies at Harrington Academy, and plenty of the individual investigations are interesting enough too. Some feel a bit like filler, such as the one that has you finding missing vases, which was somewhat of a drag, but others have high stakes and can be quite tense. The changes in tone can be a little jarring, but they ensured that I never really knew where the plot was heading. 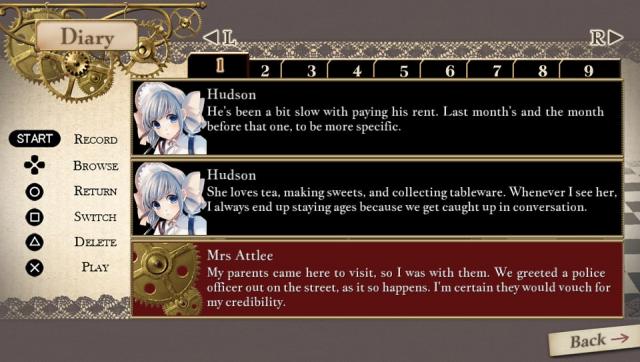 It's worth noting that there's an incredibly long common route here - far longer than any other otome game I've played - which was something I quite appreciated. It means the plot has a good sense of flow, in that it doesn't splinter off in different directions too early on and allows the main themes and ideas to develop at a slower pace, although as previously mentioned this can cause a few issues with filler content at times.

One thing Mysteria doesn’t quite nail is its investigations. The title is a visual novel through and through, meaning there are very few interactive elements. This was to be expected, but early on it teases a mechanic whereby you can make a note of conversations, which it suggests can be used to solve cases later on. You'll then proceed to play a good 10 hours and this mechanic will only be used on a handful of occasions (if that) and mostly only to lead down a certain story route (there’s no penalty for failing), leaving its inclusion feeling highly redundant. I feel this was a bit of a missed opportunity to make me feel like a true detective, but I can’t hold it against the game too much. 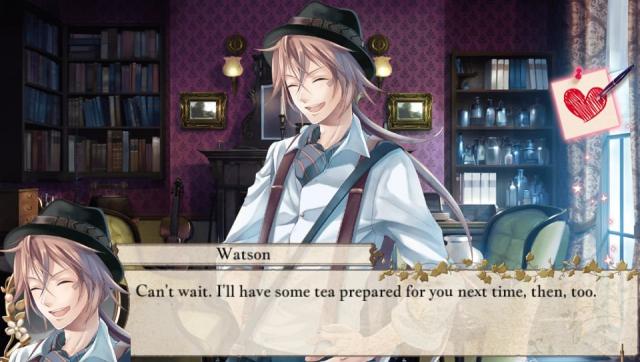 If you’re reading a review of an otome game like this then chances are you’ll want to know about the romance too, right? As is standard for the genre, you'll be able to make conversation choices as the plot progresses, which will build your relationship with certain characters, and once you pass a certain threshold you'll be locked into their route, which means following a story more closely focused on them. Invariably, this will involve Emily becoming a damsel in distress who is saved by her love interest, which is a bit of a shame as she's quite a strong character throughout the main plot, but still there's certainly plenty of scope to swoon over the men here.

Once you've seen a character's ending, you'll be able to play an extra epilogue that nicely wraps up their story and hints at their future with Emily. And then you do it all again with another character. Thankfully, London Detective Mysteria has the sense to include both a "skip text" option alongside an even better "skip to next choice" button, which means you can speed through to the choices allowing you to quickly progress through another character's route. It makes going for all of the endings a lot easier than other visual novels I've played, save for the fact that it's sometimes a little confusing when you skip to the next choice as there's no context given - you're just presented with two options, so if you've forgotten the story at that point in the narrative then you might be a little confused. 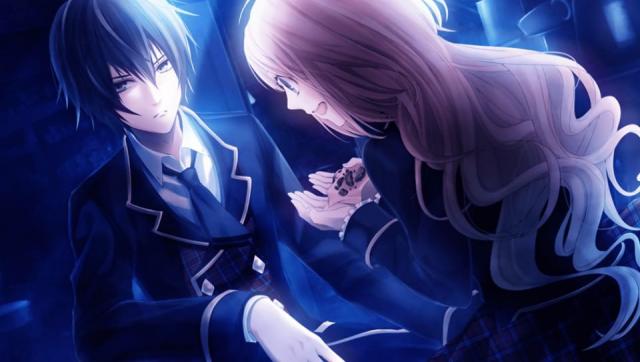 In terms of presentation, the game looks pretty nice. When I saw some of the initial artwork I was slightly worried that the characters were somewhat dis-proportioned, with big eyes and odd features, but overall I was fairly impressed with the final product. There are plenty of lovely CG scenes that show romantic moments between Emily and the male characters, and I thought that the use of colour and lighting was pretty good. The general VN conversation scenes look nice enough, but occasionally the artwork isn't quite as impressive as some of its contemporaries like Collar x Malice.

All the voices here are in Japanese and the acting is emotive, but it's the music that stands out in the audio department. There's an eclectic mix here. When Emily is at a high society party you'll get some classy violin music, while the investigation themes are more upbeat and chipper, for example, so I definitely enjoyed listening to the soundtrack while playing. 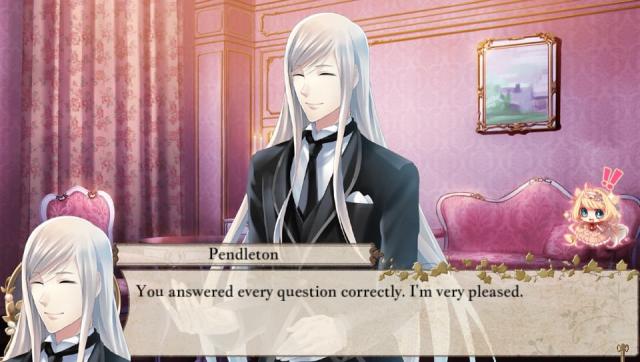 Overall, then, there's a very interesting otome visual novel here with an enjoyable plot and a group of likable characters that I enjoyed getting to know over the course of a surprisingly lengthy adventure. There are some minor pacing issues and some inconsistencies with artwork, but otherwise this is a game I can easily recommend for anyone who's either a seasoned veteran of the genre or looking to dip their toes in.

This review is based on a digital copy of London Detective Mysteria for the PSV, provided by the publisher.