Tweet
by Ben Dye , posted on 17 December 2018 / 5,440 Views
Game Freak’s Pokémon: Let's Go, Pikachu! is, surprisingly, an astonishingly good revamping of the series. When I first heard about it I was very skeptical and wrote it off in my mind as a horrible idea; I wanted a new setting or direct sequel, and I had hoped the developers would add complexities to the Pokémon formula, not simplify it in many ways. Fast forward to today, and after having played it for a rather lengthy period of time, my foot is firmly in my mouth; this is an excellent remake, chock full of new features built on to the original Yellow formula and combined with the best visuals in the mainline series. 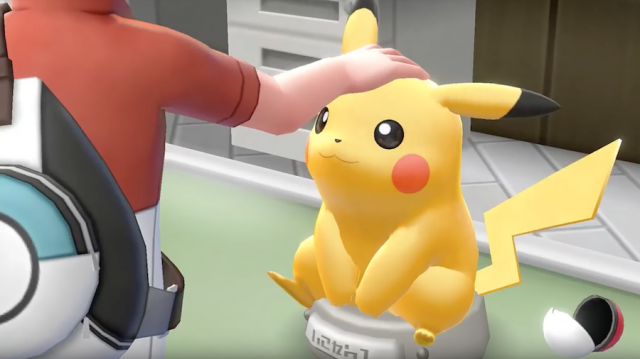 Story-wise, little has changed. You're on a quest to become the Kanto Pokémon Master, defeat the tyranny of Team Rocket, and of course “Catch Em’ All!” There are several new side characters and the dialogue has been updated a decent amount, but both narratively and in the round this is essentially the original game, albeit revamped in numerous ways. Because of that, this review is largely going to focus on the updated features that most caught my attention.
First and foremost - not only does Pikachu accompany you everywhere, but you can now have another Pokémon running alongside you or, eventually, one that you can ride on in various different ways depending on the Pokémon in question. Only a handful of specific Pokémon can be used in this capacity, so if you're like me then you may not have access to one until close to the end-game. Riding flying Pokémon also allows you to avoid random Pokémon or trainers lying in wait to challenge you. Pikachu, meanwhile, perches on yours shoulder, ready to be given treats or petted whenever you're so inclined. Another neat touch is that different Pokémon react differently to environments and stimuli. Bulbasaur loves the sunlight, for instance. 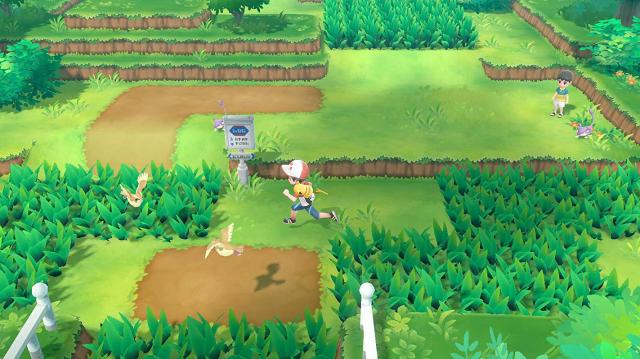 The biggest change, for better or worse, is that there are no more battles with wild Pokémon. This is a huge bone of contention for many series fans, but I quite liked seeing the Pokémon and running into those I wanted to battle or capture intentionally. Note that some Pokémon will charge at you and can be unavoidable, but this is much less common than in past entries where you would run through grass hoping to get a rare Pokémon encounter only to find 10 Rattata in a row.
Another change that initially feels alien, but which I came to love, is the catching feature with the gyro controls. In handheld mode in particular I found this it to be the single most addictive feature of this new release, and I hope that all future Pokémon games include similar catching systems (even if they battles return). Thus far I have also had a 100% success rate with running away from wild Pokémon, which is a nice quality of life improvement in my book.
Another major addition is the inclusion of Coach trainers and Master trainers. Coach trainers are kind of like mini gym leaders that pop up all over the place and help you gauge your power level to see if you need to do some more XP hunting through training and/or catching hordes of wild Pokémon. Master trainers show up after beating the game and allow you to spend a good amount of time training up specific Pokémon to beat their mirror Pokémon in order to collect titles. 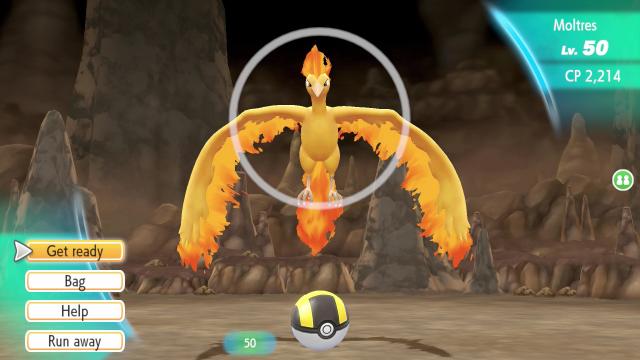 Double battles make a return and the bag/storage system has been revamped to allow you access to all of your Pokémon on the go. I hated having to go to the PC to switch Pokémon in and out in the past, so I’m glad to see they've made this system more user-friendly. Another ease-of-use feature is the experience multiplier - if you catch the same Pokémon in a row, a multiplier is added to the shared experience system that levels up your entire active line-up. Furthermore, if you catch Pokémon that are notably small or large, or unique, then experience is also multiplied.
All of the original starters can be acquired through random encounters (albeit they're rare) or from traders around the world, based on how many Pokémon you’ve caught. You can also trade with people over the internet, but you'll need specific codes to trade or battle. The online mode in general is pretty bare bones and one of the weakest aspects of Let's Go, Pikachu!; it's much more simplified than recent 3DS entries even and was clearly not designed for online tournaments or effective trading. 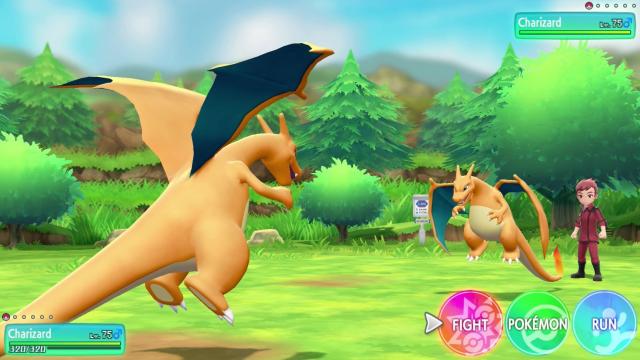 Another quality of life improvement is the increased speed at which super effective and critical attacks defeat Pokémon. No longer inhibited by the amount of health a Pokémon has, battles seem to proceed a little quicker because of this. Battles themselves are more enjoyable thanks to improved fighting animations; finally getting to see so much fluid motion with Pokémon battles is glorious.
CP, which was a huge feature in Pokémon Go, has been transferred over but is a lot more accurate, and Pokémon Go Park, which allows you to transfer Pokémon caught on your cell phone in Pokémon Go, is an amazing way to boost your line-up if you’ve spent time in that game.
Despite notionally being a remake of Yellow, Pokémon: Let's Go, Pikachu! is actually packed full of new features and quality of life improvements - all in high definition for the first time ever - making it a great debut on the Switch for both fans and newcomers alike.

This review is based on a digital copy of Pokémon: Let's Go, Pikachu! for the NS

This was fun but comparing it to SwSh, it pales.

At least you got the correct version. I mean, why would anybody ever choose anything other than the Pikachu version?

Because they want to be normal? Ba dump chhhh!

Has anyone else been having problems getting the PokeBall Bundle versions of these games??? They've been randomly popping up on Best Buy as I managed to get the Eevee bundle last night, and scored the Pikachu bundle about 10 minutes ago (thank God for my GCU!!!) - everywhere else I look, they're either out of stock or getting scalped on eBay...

In the UK I can't find them either, although they are still available separately.

Knowing Nintendo, I doubt the bundle saves you much anyway lol

It did at one shop, Argos. Probably why it's sold out there.

Well, it's less about the savings - and more about owning the collectible, for me at least! I just wasn't sure if anyone had heard whether this was a "limited" release type of thing (hence, the stock shortage), or whether it's just because of Christmas and we can expect these to be regularly available once past the holidays...?

Fair enough, I can see it's value as a collectible since it's already hard to find.

I finally caved this weekend and got a copy. I don't dislike it as much as I thought I would, although there are a few things like the cheesy interactions that do make me cringe.

However, it does feel a little bit like a tech demo, in the sense that they've recreated the map to a tee. For instance, take Viridian Forest. It is an exact replica of the map from the original - as is everywhere else. For nostalgia that's fine. But the Switch can do much more than that, so it would have been nice to see it get more depth. I can hold out hope that they push it further in Gen 8 next year.