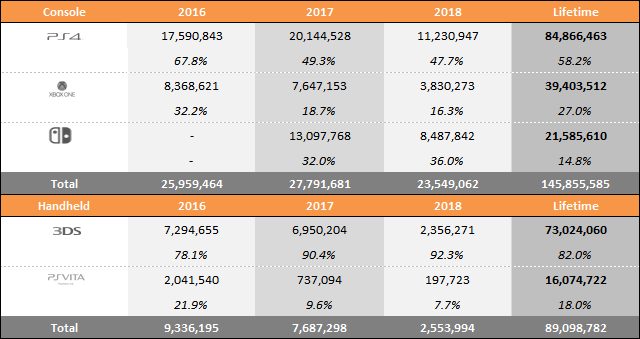 This now looks like a market that has a more healthy competition going. Except for 3DS and Vita of course.

If these numbers are accurate I don't see the Switch outselling the PS4 this year. Closing a gap of 3 million units in December is almost impossible. Especially if Sony is going to keep the €200 pricetag.

Agreed. The PS4 is a juggernaut. No wonder Sony is in no hurry to start the next gen... If PS5 is a 2020 release there's no reason to think that Sony can't sell another 10 million PS4s in 2019...
From a Nintendo point of view, yes the Switch is going very well but I can't help but think they'll be a bit disappointed with 2018 sales so far. It's a symptom of a slightly baron AAA release schedule but I predict the Switch can do 15 million units sold in 2019 with some massive releases coming....