Few characters have had as long and winding of a roller coaster through entertainment media as the web crawler. From comics to television to blockbuster movies, the superhero has swung through nearly as many highs and lows in various mediums as he has through New York itself. His video games are no exception, ranging from ambitious and unique to phoned-in and barely even relevant to the character. Much like his film franchise, Spidey’s games were in need of rejuvenation after a string of unremarkable entries. Thankfully, Insomniac Games has risen to the challenge. While there’s still room for improvement, Spider-Man is the best web shooting experience yet. 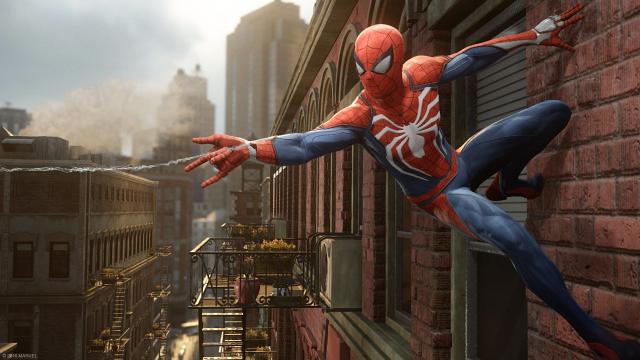 You don both the tights of the titular hero as well as the lab coat of his alter ego, Peter Parker, in a new tale independent of any other franchise timeline. Peter has worn the mask for several years and is a grown man now, having put several villains behind bars and working as a scientist. When he takes down the biggest crime boss in New York City, the resulting power vacuum sees its entire underbelly clamor to fill the void. With old and new enemies alike striking while the iron’s hot, it’s up to Spider-Man to keep the city from falling into chaos.

The game gives you the borough of Manhattan to swing, shoot, snap, and punch through to your heart’s content. Platforming has wisely taken after 2004’s Spider-Man 2 game with your webs properly attaching to the environment for a more engaging experience. Insomniac did not rest there, though. This swinging, zipping, and wall running has been taken to the next level with unprecedented polish, control, and refinement. Soaring through the city is easily the game’s greatest strength, makes every other activity that much more enjoyable, and does not get old. 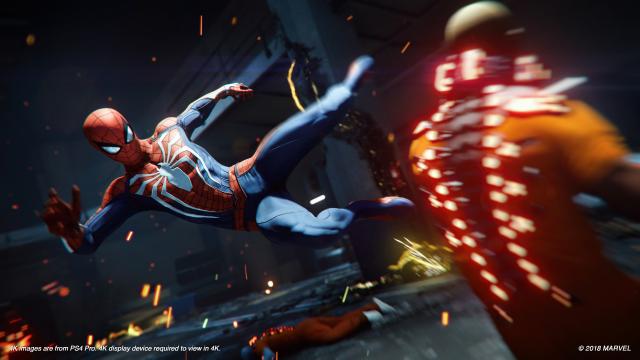 Spidey can’t stick to the skies forever, though; these bad guys won’t go down without a fight. Combat takes after both previous entries as well as Rocksteady’s Arkham series with its combo and rhythm style, but does enough to establish its own identity. Light stealth elements extend your options further and Insomniac’s penchant for creative toys shines through in the gadgets you unlock to assist you, like trip mines that comically web enemies together and other crowd control items. With punches, kicks, throws, dodges, webs, gadgets, finishers, stealth and environmental takedowns, the tools at your disposal can be a bit overwhelming and take some getting used to, but by the end you’ll be a crime fighting machine.

Your enemies are no less formidable, however. Even simple thugs carry guns that can ruin your day in a hurry if you’re not careful while others carry equipment that counter your own abilities and force you to adapt your strategy accordingly. The numerous villains from the franchise’s history that you’ll encounter make for boss fights and chases of varied quality that build on top of each other to eventually raise the stakes to epic proportions. The main story will take you through some remarkable action setpieces (with minimal quick time events) worthy of any blockbuster. 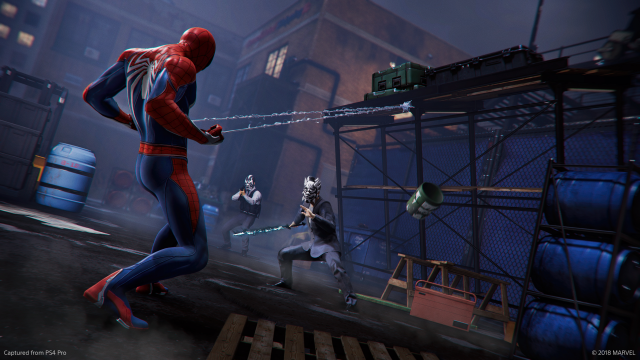 Less remarkable are Spider-Man’s sidekick segments, side missions, and mini-games. Certain portions of the game involve mandatory stealth or investigative sequences well below the thrills of the core experience. As has become standard for open worlds, the map also becomes littered with hundreds of little activities to check off. Collectathons, enemy bases, crimes in progress, research puzzles, platforming and combat challenges; there’s plenty to keep you busy but they can get repetitive and few are memorable. At least the numerous suits, gadgets, and abilities they allow you to unlock make for substantial rewards. Your mileage may vary, but these side activities do give you more excuse to keep swinging around and getting to know the city.

Speaking of the city, New York is beautifully crafted. From huge skyscrapers and cool landmarks to little touches like pedestrian interactions, using the metro for fast travel, and a surprisingly funny social media feed, the game gives you an appreciation for the Big Apple even if you’ve never been there in person. The presentation is lovely, with vivid colors, detailed characters, expansive reflections, plenty of crowds and traffic, fine motion blur, smooth camera work, and clean image quality. The triumphant score gives Danny Elfman a run for his money and game performance is nice and solid. You may encounter a few bugs, but they’re usually small and unobtrusive. 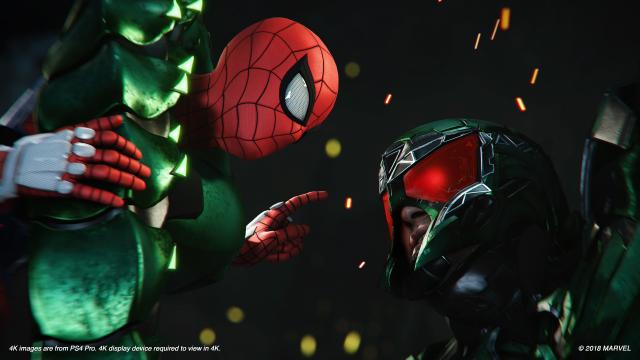 As exciting as the exploits of the masked vigilante are, it’s Peter Parker and his relationships that make the story shine. Peter is funny, likeable, and empathetic. Some finer points of the storytelling could use work, but what it lacks in technical polish it makes up for in heartfelt emotion. The bonds and conflicts he forms with his supporting cast build up some real drama in a tale of perspective, dedication, revenge, sacrifice, and the makings of a true hero. The bar has been raised for superhero games.

A few shortcomings keep Spider-Man from perfection, but with this game Insomniac has built the perfect foundation for a future masterpiece. Until that day comes, patrolling the streets of New York and keeping its citizens safe as the friendly neighborhood spider has never felt better.

Game was a more fun and fluid experience than the Arkham games for me. I don't get the story complaints. To me it's a better story than all of the movies lately. Must admit I wasn't even a huge Spider-Man fan before and didn't even expect to love the game, but I was and still am pleasantly surprised. I'd give it a 9 but considering VGC's ratings an 8 is a very good score.

I would personally give this game a 9. From start to platinum, it was basically non-stop action. Asides from the few short stealth segments as MJ or Miles, there was next to no down time. There’s so much content to the game, and there’s always something for you to do. It took me a while to finish the story, because there is so much in the open world that pulls you away, and it’s all worth it. Combat was extremely smooth and fluid and very fun to experiment with tools and figure out that there are so many different ways to tackle a single situation. Web swinging was super addictive and fun, and it’s easy to find yourself just doing that endlessly. I got easily around 35-40 hours of gameplay time before I unlocked the platinum trophy. The open world of course is breathtakingly beautiful. My only real gripes were the forced stealth segments, but they were pretty few and far between compared to overall game. Excellent product, and I can’t wait for the sequel(s).

This game to me felt like a lackluster version of the Arkham games. A good title overall but doesn't innovate. It grew on me after a few days (I am two trophies away from platinum), but I think it was a little too overhyped. Being Insomniac's first foray into such a title, I didn't expect perfection but I am hellbent on supporting them either way and know that they can only get better going forward.

If I had a PS4 I'd buy this for the spandex alone. Looks really good, I remember playing a Spider-man game as a kid on Xbox.

I think the gameplay in general is really fun, but anything that has to do with the story just annoys me. I hope they'll have writers who actually read the comics in the future.

Also kind of weird how they focused so much on a C-List villain (who I actually like, personally) despite having a bunch of A and B-Listers in the game that barely get screentime.