Being a fan of both Castle Crashers and Viking culture, it seemed that Monster Couch’s Die for Valhalla! was the perfect fit for me. While I did enjoy aspects of it, the experience was a touch on the dull and repetitive side. The game does serve as a solid, well-crafted platform for some good old fashion co-op hack and slash fun, but the solo experience doesn’t quite hold up outside of short gameplay sessions.

The game, to its credit, does contain a pretty cool gimmick that centers around controlling ghostly “Valkyries”, which can control Vikings by approaching graves scattered around and summoning them by mashing the B button. You begin the game by choosing a Valkyrie representing one of the four seasons, building their stats as you progress, and hopping from grave to grave as you scramble to summon Vikings.

This ability goes a long way in saving you in a pinch, as each time your Valkyrie takes damage, you can merely draw up a fresh Viking with a full bar of health and carry on. You can even possess barrels, bushes, and bear traps, making for an amusing cat and mouse game as you hop around inside objects, trying to evade or lure your opponent. 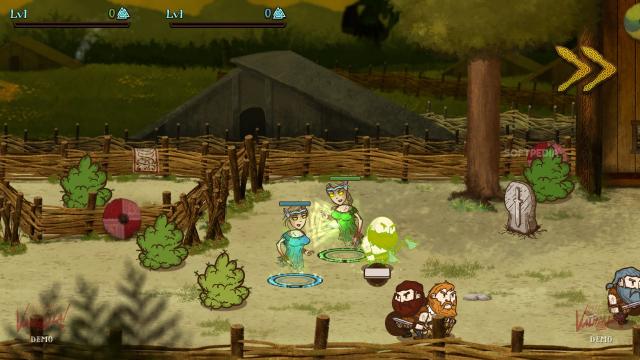 There is a kicker to this, however - a Valkyrie’s health won’t recharge, and death will promptly bring your Viking journey to an end. This becomes even more frustrating in Rougelike mode, which forces you to start back all the way from the beginning upon dying as a Valkyrie. So a decent part of the game’s strategy - outside of button mashing and landing basic combos - relies on swapping from a Valkyrie to a Viking on the fly, and vice versa. In my experience, I found that as long as I was quick enough on my feet and got enough distance between myself and trouble, I was usually able to survive by exploiting this tactic.

The old Viking switcheroo won’t always save you, however. Sometimes you’ll simply be overwhelmed by massive mobs of foes of soldiers, fast-moving spiders or scorpions, evasive flying creatives, or gargantuan bosses that engulf most of the screen. The game’s difficulty does spike quite a bit, especially in later portions where you’re thrown a wider variety of warriors and beasts that often require different Vikings to combat them most effectively. 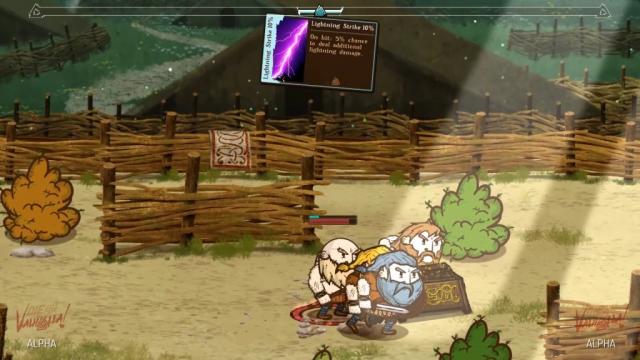 Thankfully, these Vikings usually prove to be rather strong if you know what you’re doing with them - which doesn’t take much, as their mechanics and arsenal are quite simple. They come with a basic and a charge attack, a secondary move, and a mid air hack or ground pound. You can also parry and block with either your own weapon or a shield, as well as take advantage of stronger moves utilizing a bar of stamina that dwindles rather quickly.

The Vikings include an offensively-effective swordsman, an archer who can also strategically lay traps, and an axe-wielding brute. You’ll likely spend most of the time playing with these colorful characters, as the Valkyrie spirits - despite looking eerily cool - are pretty sluggish and ineffective in battle. They’re essentially more akin to a lifeline to help bail you out of trouble. 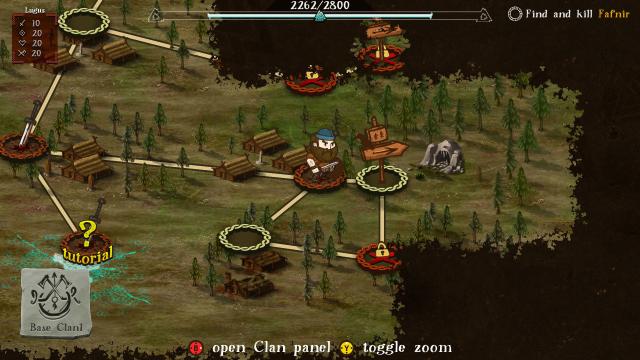 The game’s environments are pretty cool if you’re into Viking culture and, despite the cartoony cell-shaded graphics, go a long way in immersing you into this historical era rife with woodlands and caverns. Yet, like the game’s Viking-possessing gimmick, the novelty can tend to wear off somewhat quickly. It probably doesn’t help that the locations are a bit stock and aren’t too varied, and that the gameplay can feel rather grindy and monotonous. There is a handy, but somewhat ambiguous world map that often diverges into multiple paths and nodes to help tie everything together.

You’re actually working with a fair bit of content in Die for Valhalla!, just with the main campaign, let alone the extra content of Deathmatch and Survival Challenges, although this lengthy experience can be tough to appreciate given the repetitive nature of everything. With this said, the variety of Vikings, enemies, and some intense boss battles help to add a little spice to the game. There's also a pretty deep level of upgrades and customization to sprinkle in some depth, which is enabled upon gathering rune-like orbs dropped from defeated foes. These include everything from basic perks like increased attack power, to dropped potions upon Viking deaths, to triggering elemental damage during a combo. 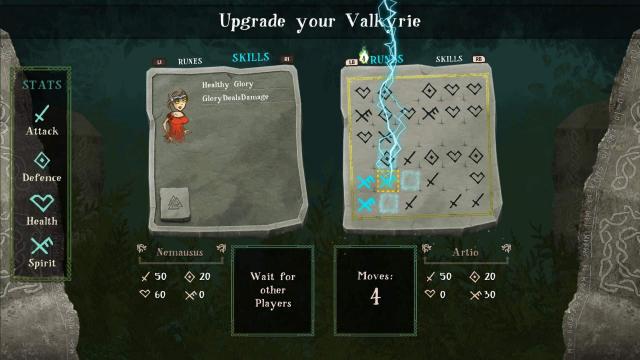 I’m certainly a sucker for action-based beat-em-ups, and my hunger for these attributes felt mostly satiated with Die for Valhalla!, at least in the early goings. Still, I’d be lying if I said the game didn’t start to drag with its grinding and repetition, and thus erode some of my interest. Even the upgrades and the action RPG-style xp system didn’t seem to make a huge impact overall during play, nor did the game’s minimalistic narrative. The multiplayer experience definitely livens up the fun and intensity to a noticeable degree, but don’t expect a revolutionary experience if you plan on playing mostly as a lone Viking.

This review is based on a digital copy of Die for Valhalla for the NS, provided by the publisher. 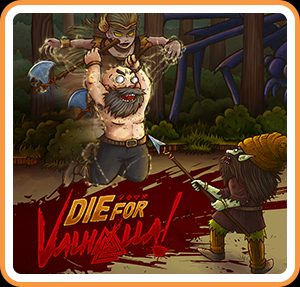