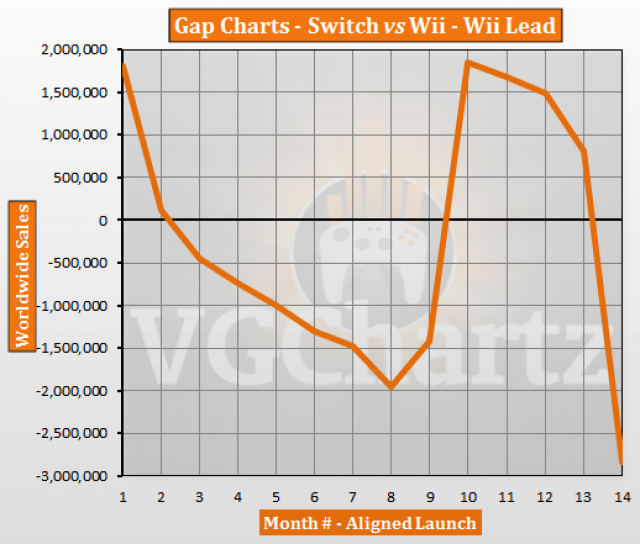 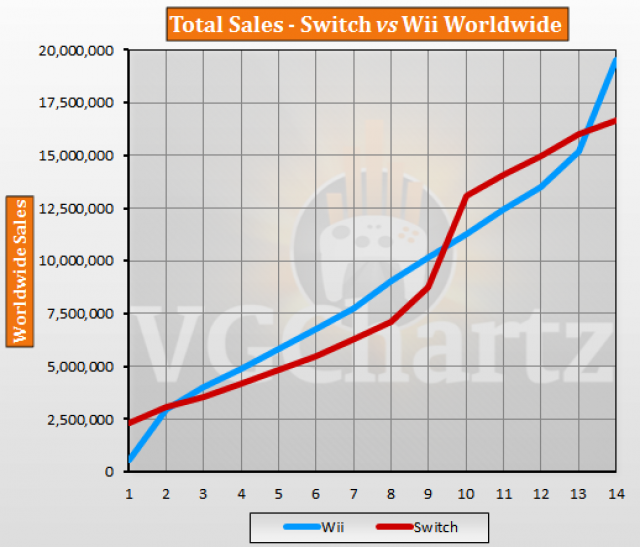 Top graphics has an error. It says "Switch Lead" but Wii is leading.

Actually, I think it was right. Since the line ended on negative 2.8M, it is talking about the Switch lead. It would be the Wii lead if it ended on positive 2.8M

It looks like a closer pairing would be with 3ds.

Not really, Wii just had its 2nd holiday season and switch will probably not die as quickly so it will be interesting in the long run.

The Wii already had 2 holiday seasons in this chart tbf.

TBH those "2 holiday seasons" don't mean anything when one was the launch of the Wii where it was consistently sold out and understocked for almost a year.

Consoles sell best at launch and the holiday.

The vast majority of consoles (PS4 / Wii / etc...):
If you launch in the holiday season you sell out, and have to wait 365 days for your console to sell at that level of inflation again.

On top of that Switch launched globally Day 1, most of the other consoles had delayed launches.

The holiday argument doesn't benefit the Switch at all, because out of all the fastest selling consoles it's the only one to "benefit" from having both it's launch and first holiday season in the same year at different times of the year allowing it to maximize the sales for that year.

It's title of fastest selling means nothing now, because Wii has passed it, and the PS4 has passed it. 3DS after its price cut has also caught up and the gap is less than 1 million.

Before the first holiday for Switch, the Switch was constantly losing ground. Holidays brought it into the lead, the holidays for Wii brought back the Wii lead. If you contuinue the line in the first graph ignoring the holiday spike, you end up there the line goes down after the Wii holidays. So it seems like the Switch is constantly losing ground compared to the Wii and continues to do so.

The Wii was a legitimate beast of unbridalled popularity in this timeframe. Nintendo has many teams working on games that they have yet to reveal: a new 2D Mario, a Monolithsoft’s next crop of games (of which there will be up to three), the next Zelda is already ~2 years into development. Although, they have yet to reveal their most powerful franchise, coming off a phenomenon 800 million players strong. Nintendo’s strongest series, ever, hits a home console for the first time in 2019. Not even the extraordinary record setting (and current home console record holding) numbers pulled by the Wii stand much of a chance.

How about making one diagramm including Switch, Wii and PS4? I guess this one would be really awesome :) such a close race between all of them. And I guess a 3rd color wont make it confusing or unclear.
I really would love to see it!
Of course this could not be done with a gap chart, but only with a total sale chart unless you decide to make the gap chart only with PS4 vs. Switch and Wii vs. Switch.
3 graphs in the total chart and 2 graphs in the gap chart would be OK I guess.

If its true that Nintendo Consoles are front loaded, in comparison to Sony consoles for example, then I predict that the Switch will top out around 55 million. It will pass the Xbox One. The only reason why you wont get Wii levels of success is because the Wii was an actual fad. Nintendo consoles don't sell that much people forget. And I believe that Switch will track closer to it consoles than its handhelds in the end.

This is more a handheld than a regular console though. I'd at least expect it to match 3DS sales.