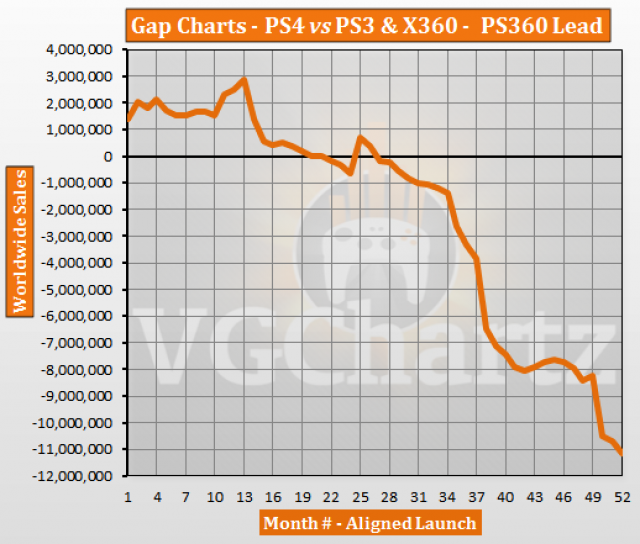 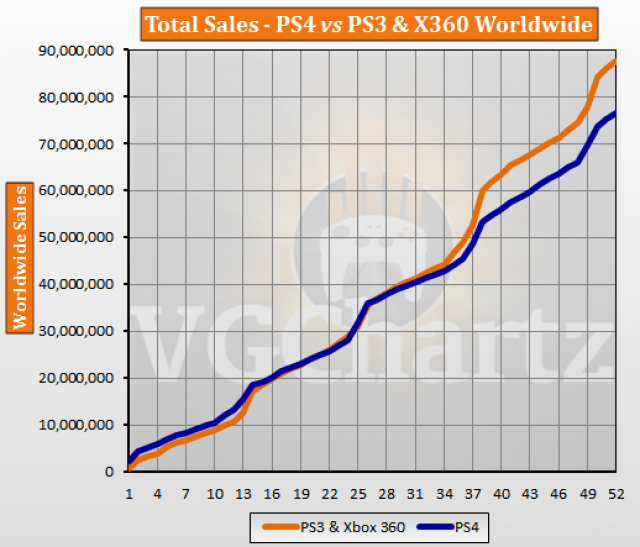 Jesus 76 million from the PS4 is only like 10 mill away from what the PS3 and 360 sold in their lifetimes.
Not bad

Also, according to VGC it look like Sony will miss its projection for sales of the PS4.

Their projection is 79 millions shipped, not sold to consumers.

If VGC is to be believed, then Sony has surpassed the PS4 projections already. Add around 2.5M - 3M to get the shipment numbers, which is over 80M. Projection was 79M.

Not necessarily Lawlight, at the end of Dec the ahipped vs sold difference was nearly 3 million, 73.6m vs 76.5m.

Theoretically PS4 could sell 3.4m last quarter while shipping their 2.5m target and have 77m sold and 79m shipped.

I see what you mean, Zorg. But assuming 77.6M sold through, a total shipment of 79M would mean only 1.4M on shelf or in transit. That is unusually low.

I have no idea why you make this graph. What are you trying to tell us? That a single current console cannot outsell both previus consoles?
What an absurd graph. Unless you incorporate XBox numbers (even if they are only rough guesses), don't bother with such nonsensical "comparisons".

The comparison originally started because PS4 was actually outselling PS3 & 360 combined, as you can see from the first graph it had a ~3 million lead at one point. It has fallen behind, which was expected, but its still holding its own, ~77 vs ~88 million isnt bad for 1 platform vs 2.

You are talking this comparison the wrong way, you see it as "haha PS4 isnt outselling PS3+360" when in reality its meant to be taken as "Damn, PS4 is holding its own against PS3+360".