The best way to think about ClusterPuck 99 is to consider it as an exponential expression where the base is a random number — let's say three — and the exponent is the number of players. Playing ClusterPuck 99 solo (three to the first power, or 3) isn't terribly exciting. Add a second player (three to the second power, or 9) and things get more intriguing. Gather four people in the same room to compete (three to the fourth power, or 81) and you're off to the races. In other words, the amount of enjoyment you extract from this party game depends greatly on how many people you can cram in front of the TV.

Inspired by soccer, hockey, and pinball, ClusterPuck 99 is an arcade sports game that pits two teams of discs against each other across 30+ maps, each with opposing goals. Boasting accessible rules, easy-to-learn controls, and top-down two-dimensional gameplay, it's a title perfect for parties and gaming neophytes. The button commands are refreshingly simple: the left analog stick moves your disc avatar; the A button shoots the puck in offense and checks in defense; and the B button activates a charge shot in offense and a brake in defense. It's so streamlined that a player could compete easily with a single Joy-Con. Indeed, ClusterPuck 99 offers an 8-player local multiplayer option for just that scenario. 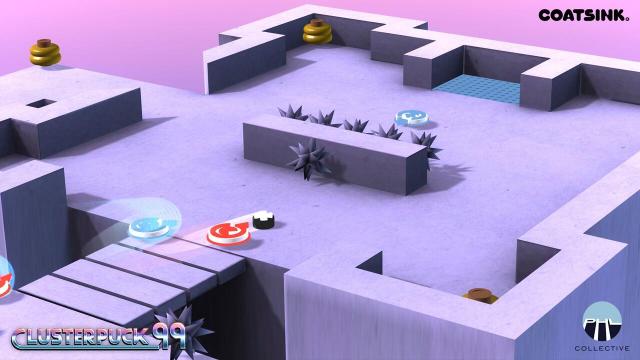 While this unadorned control scheme doesn't allow for a huge amount of tactical depth — don't expect Rocket League or even Disc Jam — its simplicity goes a long way. It turns out to be a great leveler, one that places veterans and rookies on equal footing. This game, above all else, is democratic.

As a result, it's easy to get lost in a long series of matches and rematches against friends and family. ClusterPuck 99 has that "just one more" mentality that all quality arcade games seem to share. It helps, too, that there are over 30 maps available to players — some no-nonsense, some all-nonsense, a handful exclusive to this Switch version. Depending on your tolerance for randomness, you can choose a spartan map where player skill and communication carries the hour or a level filled with spikes, bumpers, and speed pads where anything goes. If for some reason you dislike all available maps, you can build your own in a handy, intuitive arena creator. 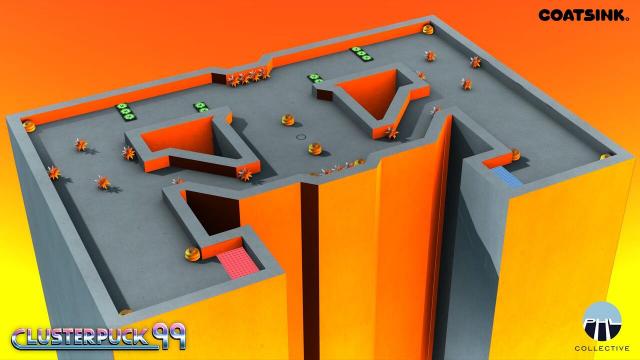 Arenas aren't the only things that you can customize to your liking. When selecting squads, you choose your team color and your individual icon (cat, mountain, guitar, hot dog, etc.). Furthermore, each competitor has his or her own profile, which tracks stats like wins, losses, goals, check, and hold time — all useful for bragging rights among friends.

Basically, if you're playing ClusterPuck 99 with 3-7 people in the same space (the game does not support online multiplayer), you're going to have a great time. Things start to fall apart when playing with one or two guests, or — perish the thought — solo. In these instances, you'll need to rely on the game's AI, which is sub-par even on the highest difficulty setting. Friendly AI teammates are essentially useless, and rival AI opponents operate randomly and clumsily. Play enough matches with computer-controlled participants and you'll notice the strangest thing: AIs pushing the puck into a corner and huddling around it — almost like a rugby scrum — then breaking away simultaneously, leaving the puck unattended. The good news: publisher Coatsink has submitted a patch to improve AI. 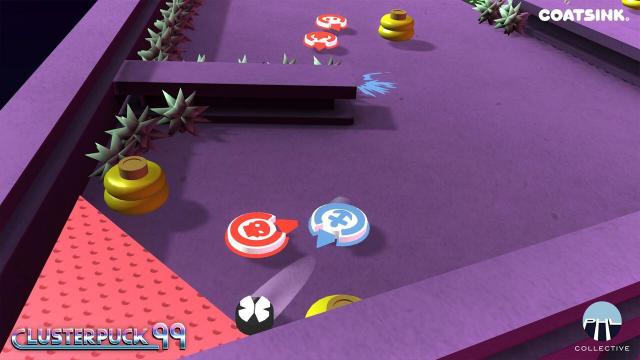 ClusterPuck 99 does include a single player challenge mode for those playing solo, but it's not much fun. There are nine stages in total, each with a different task to complete, e.g., break X number of targets or win against an AI team. Apart from unlocking a handful of skins, challenge mode isn't worth playing.

ClusterPuck 99 is a math problem. Subtract too many players and the game loses its identity and its appeal; inferior AI and dull solo challenges make sure of that. Add enough human contestants and the fun rises exponentially. If you can assemble a team of four or more together on a single couch, this is an easy recommendation. If you plan to compete with a single friend or against the game itself, you may wish to wait for the upcoming AI patch.

This review is based on a digital copy of ClusterPuck 99 for the NS, provided by the publisher. 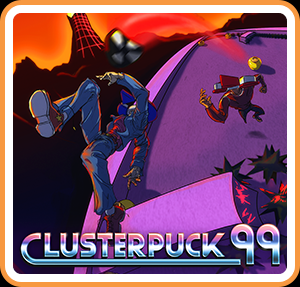