The official Nintendo of Italy Twitter page has posted the image below yesterday: 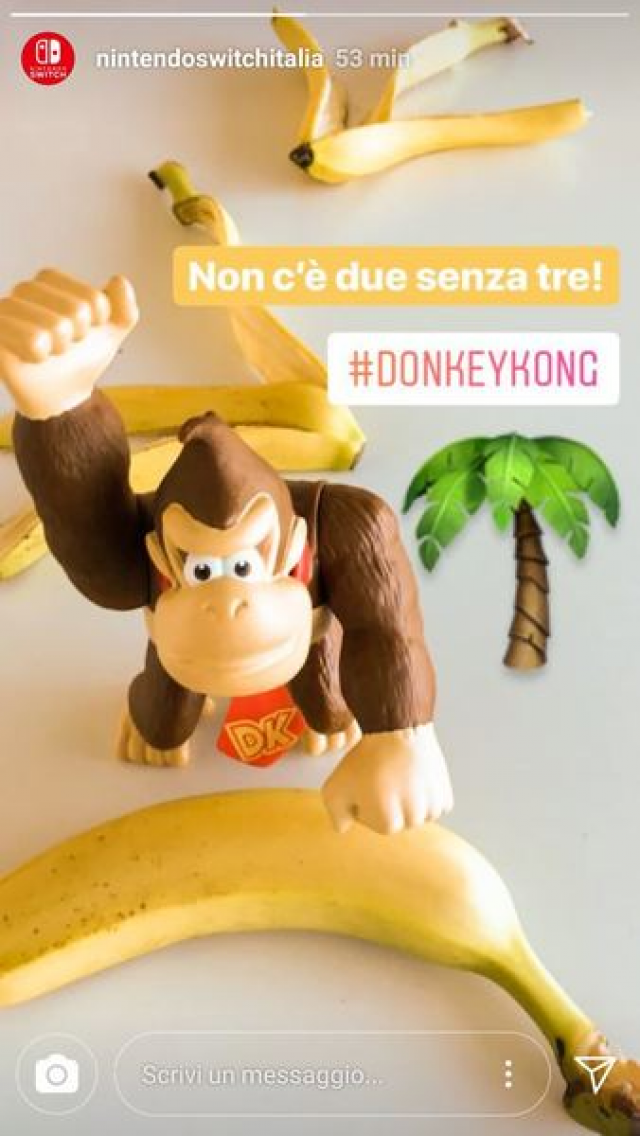 Translated it says, "There's no two without three." It looks like Nintendo of Italy subsequently took the image down, but not before some found it and started sharing it.

Many are taking this to mean that there will be a third Donkey Kong game (a sequel to Tropical Freeze). What do you think it means?

Still like the concept of a Donkey Kong Odyssey game.

Me too, especially if Grant Kirkhope and/or David Wise are brought on to do the soundtrack. :)

BETTER NOT BE RETRO'S NEW GAME

Why not? Tropical Freeze is one of the best 2D platformers made! We are also getting a new Metroid Prime. Why would it be an issue?

People want Retro to make a new IP, or at least tackle another Nintendo IP. Personally, while I think it makes sense they want to make a trilogy before moving on, I really want them to make something new, and I don't see why they couldn't come back to finish their DKC trilogy after making a new game first.

If this turned out to be Retro’s new game, it begs the question of how come they take so long to make 2D platformers. It’s been 4 years since Tropical Freeze!

2 of those years were spent on adding Funky Kong to Tropical Freeze Deluxe!

Maybe they're working on multiple games.

One can hope for another 3D DK game like DK64, but alas it sounds it’s going to be another 2.5D platformer. Not that that’s a bad thing, but DK64 was a huge part of my childhood gaming, and I can only that a potential DK Odyssey would be amazing.

DK64 was an atrocious platformer however. You grew up with N64 and played DK64 rather than Banjo Kazooie/Tooie, Mario 64, Kirby 64, Rayman 2, Space Station Silicon Valley, and (to a lesser extent), Conker? The only thing memorable about DK64 was the rap song... which was equal doses amazing and shockingly bad.

I actually played quite a bit of Banjo, Mario 64, and Kirby, and I thoroughly enjoyed them all. I just really enjoyed DK as well. Not sure what about it was “atrocious”.

Unbalanced, not-fun, a bad collection, uninspired levels and art design, unnecessary tinkering of the Country formula, fogging, framerate, with the only good thing being the incredible graphics for the time. Need I go on why I think DK64 is the worst platformer of the bunch?

Unbalanced, not-fun, a bad collectathon, uninspired levels and art design, unnecessary tinkering of the Country formula, fogging, framerate, with the only good thing being the incredible graphics for the time. Need I go on why I think DK64 is the worst platformer of the bunch?

Only if the original Rare guys are making it. The only thing that felt right about the newer games was the music and that was because it was David Wise behind it.

Retro is the only developer I want making my Donkey Kong Games.

Would love this to be true. But no 3d game please.

A Donkey Konga collection with HD rumble simulating hitting on real drums would be nice.

Could just be about DK coming to Mario+Rabbids.

But that happened way earlier than this image.

The DLC is not out yet though, is it?

Nintendo of Italy stated with a local videogames website that the image was just a funny bit about bananas, it still could be an excuse but since they were so fast in doing so I guess we can't really know for shure...

Imagine if this was Retro's game

I want this to happen just to see all the meltdowns lol.

There would only be a meltdown if this turned out to be Retro's new game.

I would also love to see the meltdowns if this is true. Keeps things entertaining