Following the announcement of SoulCalibur VI yesterday, Bandai Namco has released the first details of the game. 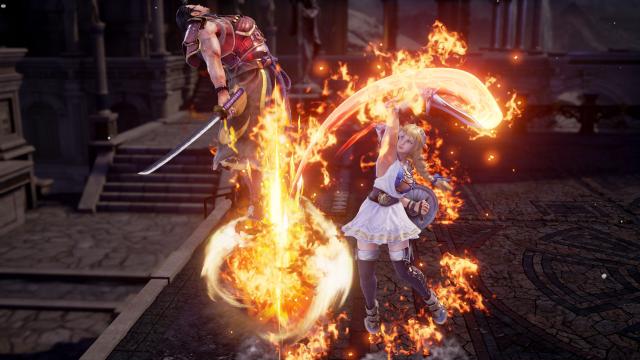 History hides away more than one truth…

Soulcalibur VI represents the latest entry in the premier weapons-based, head-to-head fighting series and continues the epic struggle of warriors searching for the legendary Soul Swords. Taking place in the 16th century, revisit the events of the original Soulcalibur to uncover hidden truths. The heroic battles transpire in a beautiful and fluid world, with eye-popping graphics and visual appeal. Soulcalibur VI tunes the battle, movement, and visual systems so players can execute visceral and dynamic attacks with ease. Soulcalibur VI marks a new era of the historic franchise and its legendary struggle between the mighty Soul Swords!

In Soulcalibur VI, “Reversal Edge” is a new battle system that integrates both offense and defense. Once a Reversal Edge is activated, you can continuously defend against the opponent’s techniques to clash against each other and follow-up with powerful counterattacks based on the opponent’s actions. When a Reversal Edge hits, you can enjoy a powerful production like a scene from an action movie highlighted by a dynamic camera.

Soulcalibur VI will launch for the PlayStation 4, Xbox One and Windows PC via Steam in 2018.

Probably my favorite fighting game franchise. I just hope that they've put more effort into it than the last one. Now show me the ninja contingent.

"revisit the events of the original Soulcalibur" sounds like the best possible direction, so we can forget SC V ever existed

oh, and bring Hwang back :D

No Star Wars characters. More character and gear customization. A good roster and nothing like SC V, and you got a day one purchase from me.