In the initial section of the first level, I was using the burrowing ability of the adorable and titular fox, Lucky, to unearth some coins that are recognizable by small dirt mounds.  My eye was drawn to a shadowy, tunnel-like opening peaking half way above the ground.  I suspected I had discovered my first hidden area in the game – it seemed too perfect to have a half-exposed opening so near an area where you are expected to be burrowing. So I burrowed back into the ground and headed for the tunnel.  At the tunnel, Lucky bounced off of it and up out of the ground, the same as he does when burrowing into a wall or another fixed structure.  I tried once or twice more (don’t judge me) just to be sure I couldn’t enter the tunnel before giving up and proceeding on with the rather linear level.

As I continued further into the game (a mostly pleasant experience), I came to realize that, with few exceptions, those opening moments really captured the essence of the entire game.  Super Lucky’s Tale is a cute game with a simple plot, beautiful graphics, decent art direction, but highly conservative game design. 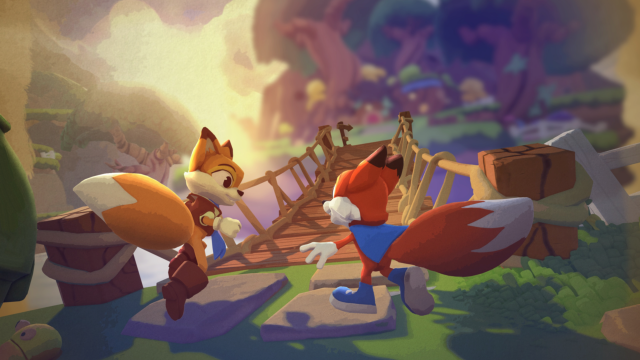 The modest story begins with Lucky’s older sister returning from an adventure with the powerful Book of Ages, only for the Kitty Litter, a group on feline antagonists, to show up and attempt to steal it.  Lucky and the Kitty Litter end up trapped in the book.  As Lucky, you must rescue the book and defeat the Kitty Litter.

Given the genre, it’s not unexpected for the game to have an unremarkable story.  Fortunately, the characters and dialogue provide some flash and fun.  From funny names to clever dialogue, it elicited smiles or laughs on a number of occasions.  However, Lucky is seemingly content to try to get by on just his looks.  With minimal dialogue, there just isn’t much to the main character save for how cute he is.

Graphically, Super Lucky's Tale is very polished, especially when running on an Xbox One X.  In general, the art direction is pleasant, but can at times feel dull, or at least restrained.  The decision to make the camera only slightly adjustable means you can’t always take in the sights as you might like, which adds to that restrained feeling.  The audio is also good, but doesn’t stand out as much as the graphics.  Most of the score does a fine job of setting the tone for the game, but I only recall one or two tracks really standing out. 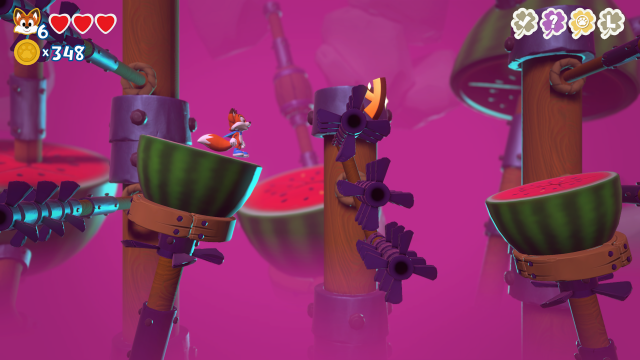 There’s a nice variety of platforming level types throughout.  Most of the levels are full 3D, with side scrolling and even some “endless running” type levels mixed in.  There are also some unlockable puzzle levels that start out easy, but evolve to be solid challenges.  They provide a great change of pace, especially the statue puzzles, but that change of pace could have been utilized better by dispersing these puzzles throughout levels in general, rather than making them stand alone levels that you can tear through (as it stands, when you unlock one of these types of levels in one of the four hub worlds, completing it unlocks the next one).

Perhaps the reason they are stand alone is because of the way collectibles are handled in the game.  Most levels have four main items you can collect, a certain number of which are needed to proceed further into the game.  Peculiarly, if you miss any one of those items, you must retry the level in its entirety to collect it.  So, going back through a level just to try or retry a puzzle section might have proven to have been a chore, as it occasionally proved to be when having to go back for one of the main collectibles. 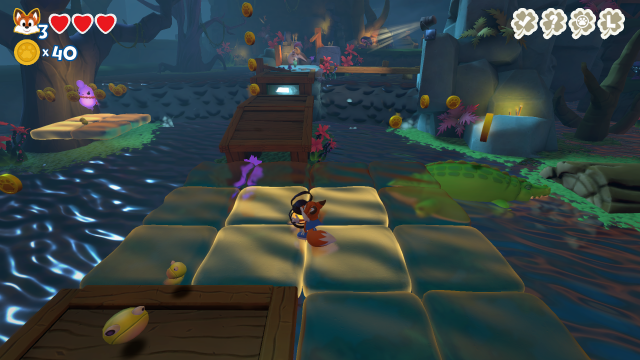 Puzzle sections aside, levels tend to feel linear.  With few exceptions, you can essentially push forward on the thumbstick and see and collect everything in every level.  I can recall a couple of collectibles that were hidden nicely, and a handful of 3D levels that are expansive enough that you have to work a bit more to find everything, but they're the exceptions.  Linear as the level design can be, there are numerous sections that are really fun, such as navigating a maze of fireballs while carrying a statue head.

So there are flashes of fun and potential, even if a lot of the game feels rudimentary.  As this is essentially Lucky's debut (I have a feeling I am far from alone in not having played the Oculus Rift-exclusive Lucky’s Tale), it’s solid. 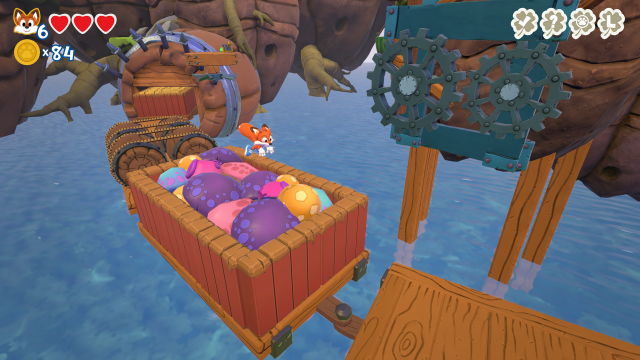 Undoubtedly, the biggest issue is the camera control, or lack thereof. Being able to pivot the camera no more than 45 degrees from the default centered view (and no vertical camera control) not only leaves you limited in being able to take in the sights, it also undermines at least some more fundamental aspects of the game.  The limited view that is provided can make judging depth very difficult.  For the first half of the game or so, it’s not really too big of a deal.  Later levels, however, begin to blur the line between the 3D and side scrolling levels.  The 2.5D parts of 3D levels can be frustratingly difficult because the view does the gameplay such a disservice in those instances.  The same goes for a phase of the final boss fight.

With creative and challenging sections throughout, it’s a shame that a limited camera angle works so badly against some of the level design, and likely adds most of the difficulty to the game. It’s satisfying working through the statue puzzles and imaginative parts of levels, but I found no delight in overcoming a frustrating camera that you could argue is incompatible with at least some of the levels. 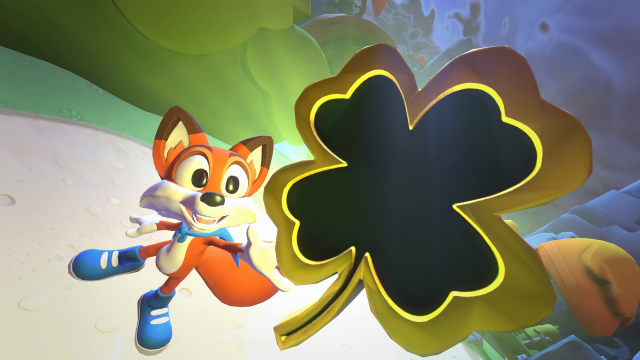 Most of the time I found Super Lucky’s Tale to be surprisingly entertaining.  It seemed set to be an easy recommendation for family friendly gaming.  The simple, linear design is good for younger gamers, or those new to the genre.  But the frustrations I had later on from the camera made me wonder if those same gamers wouldn’t just walk away from the game at that point.  Most of my other complaints are minor, but the problems with the camera are indisputable issues.

Ultimately, Super Lucky’s Tale is too conservative to be much more than good, especially when combined with some of its more questionable design choices.  However, to its credit, it is indeed good.  With the camera as the only significant exception, I really enjoyed my time with the game and I'm hopeful Playful will follow it up with a more ambitious sequel (something that is actually hinted at in the game itself).  Regardless, Super Lucky’s Tale is a solid, albeit simple platformer.


This review is based on a digital copy of Super Lucky's Tale for the XOne, provided by the publisher.

Makes me wonder if Tails is going to file a copywriter infringement lawsuit. 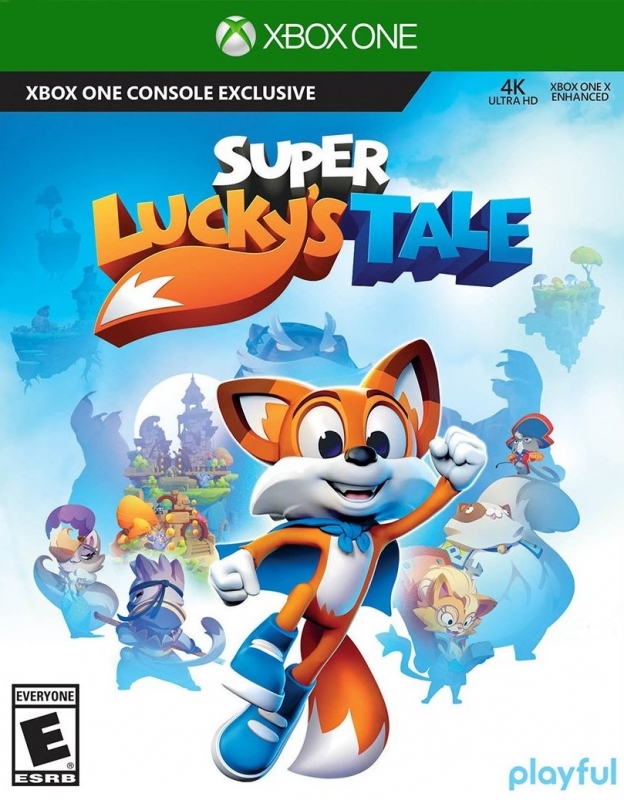