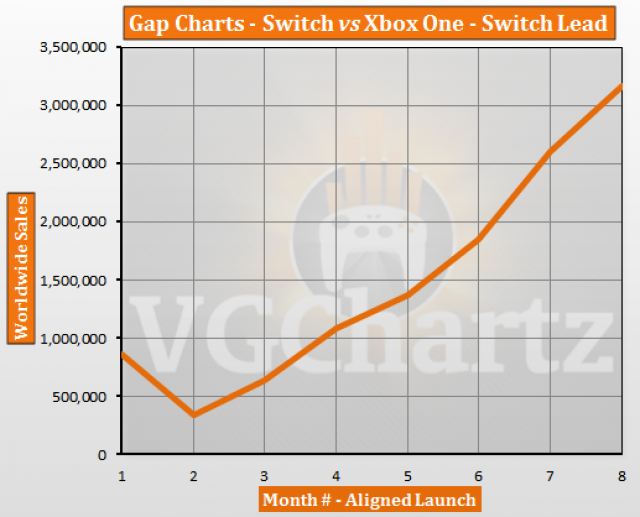 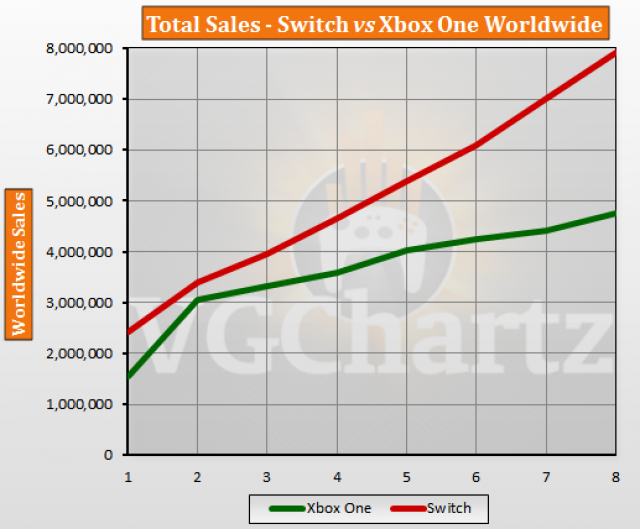 October 2017 is the 8th month that the Nintendo Switch has been available for. During the latest month the gap grew in favor of the Switch by 569,562 units when compared to the Xbox One during the same timeframe. The Switch is currently ahead of the Xbox One by 3.17 million units.

Azzanation, the Switch is more expensive and less powerful than the Xbox One. Go figure why someone's "azz" is getting kicked.

It took the Xbox One 43 months to reach 30 million.
The Switch may very well do it in less than half that time.

Wow, even without a holiday season Switch is doing well against Xbone. Impressive. But it's just a fad, Switch will eventually fail into obscurity.

Holiday season means nothing, when it's a console launch. XBO and PS4 launched in the holiday season with a limited amount of consoles available, you can't sell more than you can make.

Core gamers and scalper are going to buy out the stock of a console regardless of when it launches, just like the Switch selling out in March, and for that matter the Wii U selling out as well even though it went on to be Nintendo's worst selling console.

XBO doesn't get a real holiday boost in sales until November 2014 (a year later). Switch benefits from a holiday boost just 8 months after it's launch.

That being said this is a easy win for the Switch, XBO never sold very well except at launch and around the holidays due to some of the steepest discounts and bundles each year on the hardware. XBO sells like 2m - 3m all year then sells 5m - 6m in the holiday season alone. Switch is at 8m while missing sales from both January and February (slower months) & November and December (best selling months of the year).

Crazy how much the Nintendo Switch has sold even with shortages!

Every major console / handheld has had shortage periods. But yes the Switch is doing very well and should be tracking close to PS4 in sales. The Switch will continue to do well into 2019. 2020 will be the point where Switch likely peaks, and it won't be until 2021 where we can determine where Switch will ultimately place in sales.

Currently it's on track to match the XB360 and PS3, due to Switch starting off with a much better sales lead, but those consoles selling for 7 / 8 years before having successors, and Switch will likely see a successor in 5 years.

Next month we are gonna say sayonara Xbox one.
The gap will increase so much it won't even matter a comparation lol

There will definitely be a big increase, but as soon the XBO rolls around to it's first "TRUE" holiday season the gap will drop back down to something like it is now....

Then the Switch will take off once again as it sells well throughout the year, while XBO will do mediocre at best until a AAA releases or it hits the holiday season again.

Switch looks to be headed in just One direction, up.

They should do a Switch vs Wii U gap chart next.

Oh god, the Xbox One chart is already enough of a bloodbath.

With xbox one x, xbox one will outsell switch and ps4 this November and December easily. The xbox one x is selling out everywhere

The Switch and PS4 are also selling out, right?