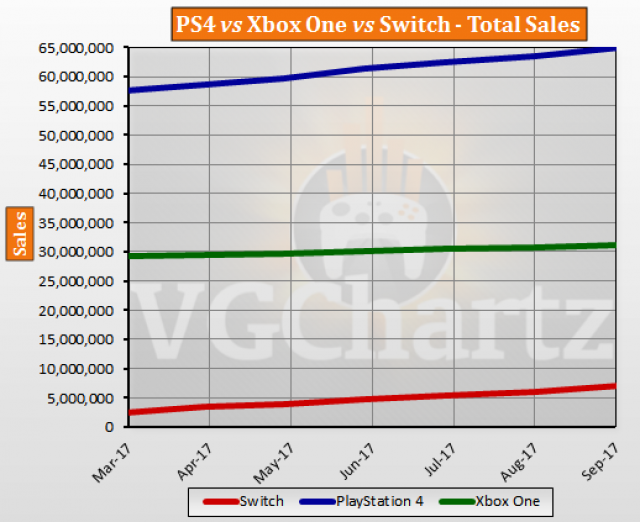 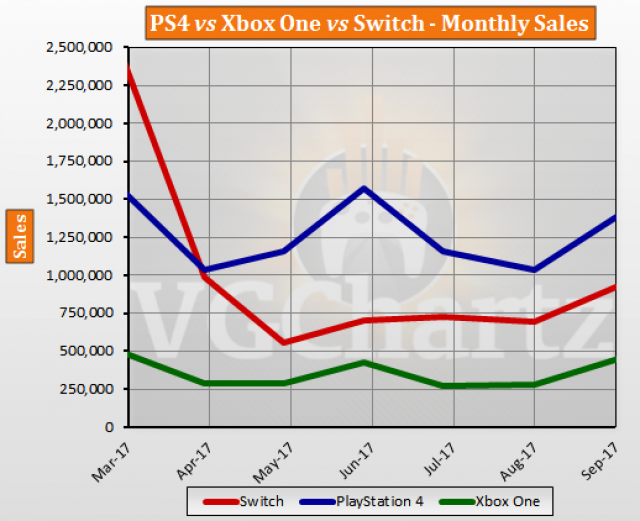 Taking a look at the marketshare, the PlayStation 4 managed to achieve 50 percent. The Switch accounted for 16 percent of the consoles sold, and the Xbox One 34 percent.

Nintendo announced it had shipped 7.63 million Switch consoles on September 30. When you subtract our figures from the shipped figures it would put 610,000 units on store shelves and in transit heading into the holiday season.

Sony announced it had shipped 67.5 million PlayStation 4 consoles on September 30. When you subtract our figures from the shipped figures it would put 2.6 million units on store shelves and in transit heading into the holiday season.

Wow PS4 is a beast in terms of sellings.

So, let me get this straight. PS4 sold 102k in Europe in the week of the 23rd Sept.? Of that amount, the U.K. and Germany accounted for 13k+ sales and France accounted for 10k sales. This adds up to roughly 28k sales. So the rest of Europe (not including the 3 biggest markets} accounted for more than 70k sales? How do you explain this or has it been adjusted upwards for past discrepancies? Same question for the roughly 145k stated as sold on the week of 30th Sept. except i don't yet know the breakdown.

7 million already?That is great.Cant wait to see how well it performs next year

Switch might win more NPD’s than PS4, but it’s very clear that PS4 is the winner in global sales.

Just wait until this time next year. The Switch is going to sell like crazy in the next 12 months.

The PS4 will sell 10+ million sales in the 4th quarter of 2017 and be well over 75 million sales and extend its lead over the Xbox One. PS4 is easily winning the console sales war. Go the PS4!