In one moment, I am fighting off raptors with swords and shields.  Another has me throwing grenades to take down a mechanical war machine.  Other moments force me to take out mutated soldiers with a laser gun.  These are just some of the experiences I had in Piranha Bytes’ latest open world RPG, ELEX, a game that attempts to mix a large number of other RPG ideas while maintaining a voice of its own.  Although ELEX excels in some key areas, many of the issues that are also present in Piranha Bytes’ previous games keep it just short of being stellar.

One element that differentiates ELEX from other RPGs is the setting.  ELEX is a game which Piranha Bytes has referred to as post-apocalyptic science fantasy.  The earth-like world of Magalan was struck by a near extinction level meteor over a century ago.  With the meteor came a powerful resource that became known as Elexit, which changed the world and mutated many of the remaining animals and survivors.  The survivors of the disaster eventually formed four groups, each with a different philosophy surrounding the use of Elexit. 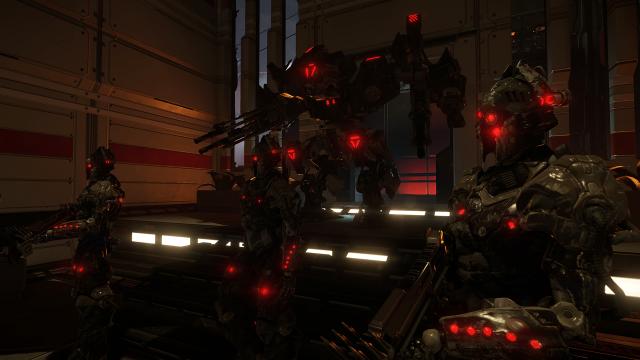 The main enemy force, the Albs, wish to consume Elexit, believing that it will allow them to reach the next stage of evolution at the cost of their humanity.  The Berserkers convert it to Mana to power their abilities and wish to return the world to a more natural state.  Outlaws are interested in it as a source of currency while living free from laws.  Finally, the Clerics use it to power their high tech war machines and dedicate their lives to their god Calaan.  In the midst of this, conflict between these four factions for control and influence is inevitable.  ELEX’s setting is clearly unique and Piranha Bytes successfully crafts a world that you want to explore and learn more about and the story does well to build upon this setting.

Although not entirely original, the story does a good job of keeping players invested in the world of Magalan.  In ELEX, you play as a former Alb commander, Jax.  Sentenced to death for failing a mission by the Albs, he instead survives the execution attempt and wakes up days later.  Free from taking Elexit, Jax experiences emotions and free will for the first time.  From here, you’ll progress through the open world on a quest for revenge against the Albs that betrayed you.  Through your quest, you will interact with many characters from each of the four factions and these interactions significantly impact how the story unfolds.

Indeed, player choice is clearly still very important to Piranha Bytes and something they still excel at in ELEX.  For example, you have a lot of freedom in choosing how you complete quests.  As Jax, you can also choose to join either the Berserkers, Outlaws, or Priests after completing a number of quests for each.  Joining a faction allows you to unlock faction specific abilities.  Of course, you can also choose not to join any faction at all.  Once again, choosing to join a specific faction alters the story immensely.  Because there are so many ways to tackle quests and different factions to join, ELEX offers a high degree of replayability even beyond the 40 or so hours it takes to complete the main campaign. 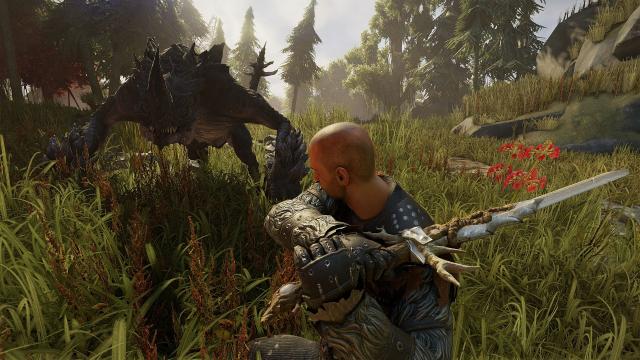 Another area offering a multitude of options is the vast array of weapon types.  In fact, I’m not sure there are many games out there that can rival ELEX in this regard.  You have weapons that span from medieval swords, axes, and bows to modern day shotguns and grenades, to futuristic laser guns and heavy weaponry.  Add to that the possibility of magic attacks and high tech gadgets and you have a truly staggering amount of arms to choose from to fit your style.

Unfortunately, no matter what weapons you use, one of the key drawbacks of ELEX is the clunky combat.  For melee attacks, there is a stamina bar that depletes as you fight and dodge, similar to the Souls games just not nearly as responsive.  Shooting mechanics are no better, suffering from a noticeable clumsiness.  Piranha Bytes still has issues when it comes to combat mechanics and providing a vast array of weapons for players can't mask these core issues; indeed, it seems to exacerbate them.

Early on in ELEX, weapons are actually quite ineffective against the dangers found in Magalan, and it takes a while before you get access to more powerful arms.  Even the most seemingly weak enemies can prove challenging at the start.  Often, the best strategy in the beginning is to run and avoid encounters.  This results in a slow start to the game for players.  It wasn't until ten hours into ELEX that I felt powerful enough to hold my own.  This reinforces a strong sense of danger in Magalan, and makes it more satisfying when you can finally overcome these enemies, but players who don't have the patience may not find the early hours too enjoyable. 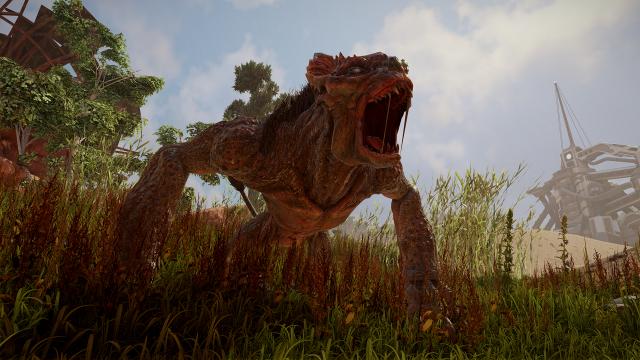 Naturally, like in other RPGs, as you level you get more powerful.  Each level gives you points to use on upgrading your stats.  There isn't a significant difference as you upgrade your stats but weapons and skills require you to reach a certain number before you can use them.  As you level, you also unlock ability points which allow you to learn new skills from trainers.  As you learn more skills in certain categories, more conversation options become available.  ELEX’s RPG systems are well put together, allowing for a high degree of customization without being watered down.

Another important RPG aspect ELEX excels at is the exploration.  Secrets hidden around Magalan encourage exploration.  More dedicated players can also collect and read notes or audio recordings of the world before the meteor strike to get a better understanding of the backstory.  Jax also has access to a rocket pack from early on in the game which makes traversing the environments more enjoyable.  See a mountain or building you can't walk up?  Your rocket pack can often help with that.  One of my favourite stunts to pull in ELEX is jumping off from a high cliff and engaging the rocket pack at the last moment to land safely. 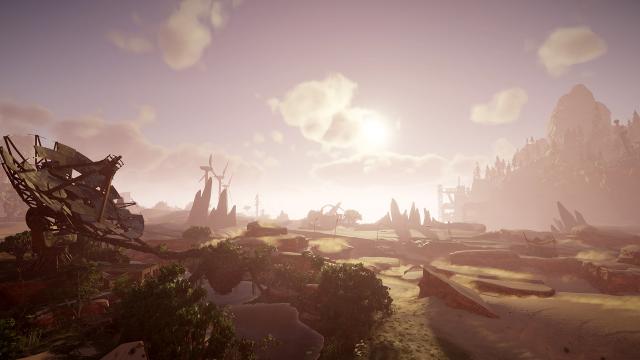 Exploring is also worthwhile because of how beautiful the varying environments in Magalan can be.  The post apocalyptic world is captured well by Piranha Bytes.  You’ll see ruins of abandoned buildings and wrecked cars on your adventures.  You’ll also visit majestic forests of the Berserkers, desolate deserts of the Outlaws, volcanic charred lands of the Priests, and snow peaked mountains of the Albs.  Although there are other open world RPGs that are graphically more impressive than ELEX, considering the size of the team, Piranha Bytes did well to ensure areas feel unique and alive.

However, not everything about the graphics is solid.  Models are generally unimpressive, particularly during conversations.  Animations are sometimes clumsy, often stiff, and can be a distraction.  Enemy designs are also quite bland outside of a few standouts.  These graphical issues are nothing major individually, but compounded they give you the sense that ELEX would be more engaging with better models and character designs.

Another aspect of the presentation that could use more attention is the sound design.  What's there is decent but doesn't really stand out as particularly strong.  Music is also forgettable outside of a few tunes.  However, the part that I found most lacking was the voice acting.  Lip syncing didn't match much of the time and some of the delivery was unintentionally humorous.  Some of these issues could be attributed to the fact that Piranha Bytes is a German developer, so had to get its work translated into English, but a bit more oversight in this area could have gone a long way. 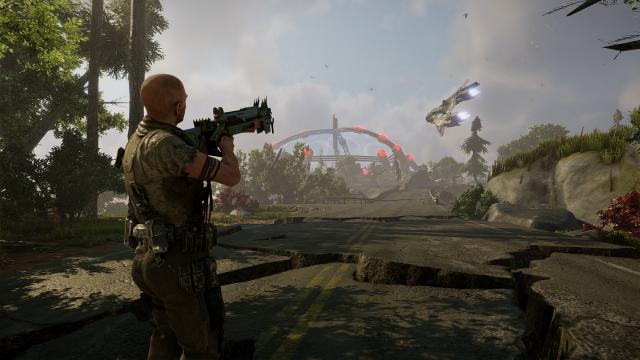 Another nagging issue is bugs.  These bugs are for the most part minor but they do eventually become an annoyance.  On the PlayStation 4 version at least, the menu eventually bogs down.  This becomes frustrating when you want to check the map or the progress of a quest.  A full closing of the program or resetting of the system temporarily clears this.  Other bugs include NPCs falling through the ground, allies not helping in combat, or perhaps Jax not getting up after sleeping.  Again, mostly minor bugs but they are issues that become increasingly annoying the more you run into them.  Fortunately, these bugs were not game breaking and I was always able to continue on with my progress.

ELEX does little to break new ground in the RPG genre.  Fortunately, the core aspects that make a solid RPG are done expertly by Piranha Bytes and this results in a world that is worth exploring.  If you can stand the uneven presentation, clunky combat, and nagging technical issues, you’ll find a gem of a game under these blemishes; one that offers you a multitude of choices, an original setting, excellent exploration, and high replayability.

This review is based on a digital copy of ELEX for the PS4, provided by the publisher.

This game gave me cancer.