Last generation, Capcom almost single-handedly ushered fighting games back with the release of Street Fighter IV.  They continued that upward trend a few years later with Marvel vs. Capcom 3.  Fast forward to the ninth generation and things have not been so rosy for Capcom fighters in today's competitive market.  On the one hand, you have an increasingly crowded genre with strong entries from series such as Mortal Kombat, Injustice, Killer Instinct, and a multitude of others.  On the other hand, Capcom has made some questionable decisions including releasing Street Fighter V with less content and on fewer platforms than many of its competitors.  With Marvel vs. Capcom: Infinite, Capcom aims, and largely succeeds, at addressing these issues, however other problems persist. 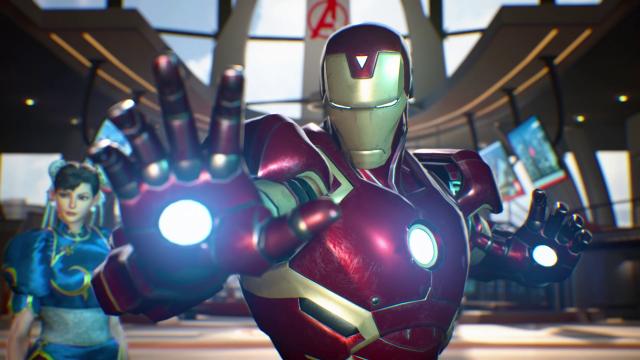 One thing that was noticeably missing from Street Fighter V at launch compared to its competition was a story mode.  Capcom ensured Marvel vs. Capcom: Infinite launched with a story but its execution is generally poor.  The story starts in the middle of the action, 80 days after the convergence of both Capcom and Marvel universes, where heroes from both do battle against Ultron-Sigma, the main antagonist, and an army of Ultron bots.

Although this allows you to jump into the action right away, I feel it would have been far more interesting to see how the heroes from both universes responded to meeting each other for the first time.  Instead, the story starts when they're already teamed up and in various groups.  It's also relatively straightforward, with few surprises, but it is still fun to see heroes from both universes interact with each other in their quest to find the Infinity Stones.

Another problem with the story is that most of the fights involve battling Ultron bots rather than actual characters.  There's variety in some missions, like one when you're tasked with defending Black Panther's nation of Wakanda from waves of Ultron bots, but those missions are too few.  It would have been nice to see Capcom take more creative risks with mission variety.

Perhaps the worst part of Infinite’s story is how it's presented.  The voice acting is uneven - there are some standouts, but generally they're just serviceable.  Models of characters who have masks are generally well done but most of the ones whose faces are shown verge on being humorous, especially when they're speaking.  Animations are equally mediocre and rarely rise above being just acceptable.  Overall, it seems the story’s presentation lacks a layer of polish that extra development time could have helped with.  Fortunately many of these presentational deficiencies are not as noticeable while playing thanks to the quick pace of play. 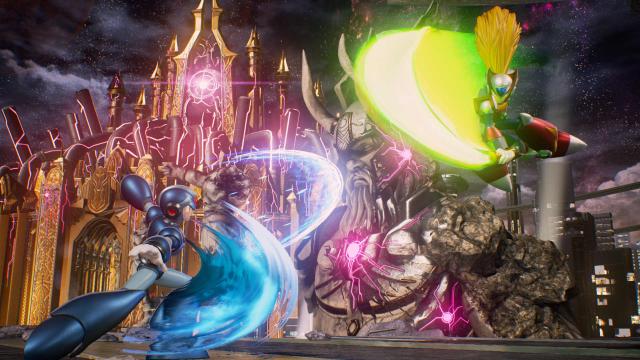 It's clear that Capcom dedicated most of their development resources on the gameplay elements rather than the presentation.  The content that Street Fighter V lacked at launch is in Infinite in spades.  On top of a full Story, you have a Battle mode that includes online and offline battles, as well as an Arcade mode.  The Online battle modes have ranked, casual, and a new Beginners league, where only players from lower leagues can compete until they’re ready for higher leagues.  There's also a spectator mode; a Training mode, which allows you to practice against a bot; and finally a Mission mode, which teaches you more advanced techniques and combos, allowing you to complete 10 missions for each of the 30 characters.  All in all, there is a lot of content to enjoy in Infinite and you can spend many hours, offline and online, honing your skills.

The many modes are very enjoyable thanks to Infinite's quick, accessible, and deep gameplay.  Capcom still clearly understands fighting games and fortunately it is on full display here.  Veterans will feel comfortable while still having a lot of new mechanics to master.  An immediately noticeable difference from Infinite's predecessor is each player chooses two characters compared to the three fans are used to, as well as the lack of a call in assist attack.  Instead, players can switch characters at any time with a new Active Switch to continue combos while in mid-air or even while being attacked to counter combos.  Although this may seem like a big departure, all the intensity and lightning quick action remains. 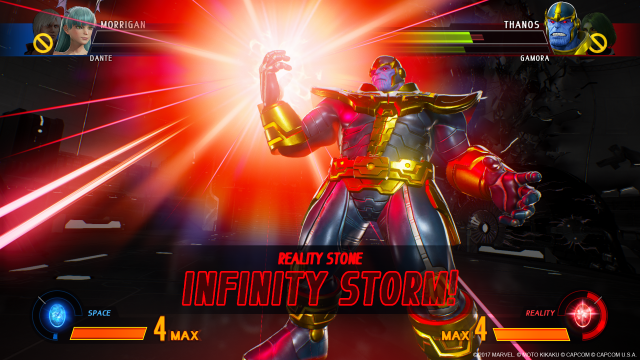 Another major shift is the introduction of an auto combo system.  This allows even novice players to pull off simple air combos with consecutive presses of the same button.  This makes it more accessible to newer players who may have difficulty consistently juggling opponents in the air.  It's useful for learning the mechanics and is quite effective against AI opponents, but over-rely on these auto combos against any decent player and you won't last long.  This is a meaningful shift for the series, one that makes it friendlier for newcomers, but not the largest.

The most significant gameplay change in Infinite is the introduction of the Infinity Stones.  Along with choosing two characters, players select one of the six Stones to battle with.  These stones all have different abilities and can quickly change the landscape of a fight when used correctly.  Each stone has a specific Infinity Surge that can be used at any time during a fight.  For instance, the Reality Stone creates a red projectile that homes in on your opponent, while the Time Stone allows you to quickly teleport a few spaces forward.  After filling your Infinity meter at least halfway, you can perform an Infinity Storm, which grants you a significant boost while in combat.  The Soul Stone’s Infinity Storm heals you and can even revive a fallen character, while the Time Stone’s slows down your opponent, making them more vulnerable to combos.  These Infinity Stones add a new angle to the gameplay and allow for a high degree of creativity  and depth. 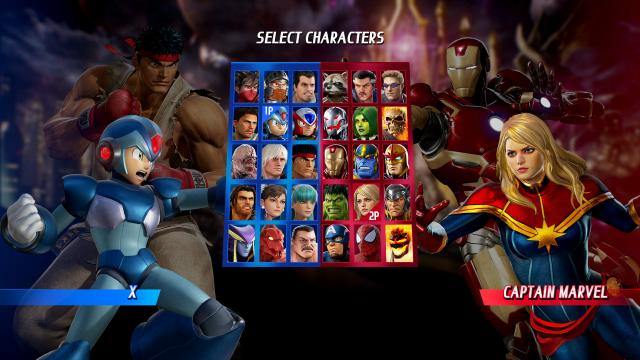 To truly find an Infinity Stone you favour, you will need to become familiar with many of the characters in Infinite.  There are 30 characters at launch, but this leads to another unfortunate aspect of the game.  The 30 characters are down from the 36 that Marvel vs. Capcom 3 launched with and most of them are returners.  The roster also quite noticeably lacks any X-Men characters - a previous staple of the series.  Of course, this may not be all Capcom’s fault, due to licensing agreements, but it is disappointing nonetheless.  Finally, there are six more characters held back as DLC.  This wouldn’t be as much of an issue if you could unlock them using earnable in-game currency like you can in Street Fighter V, but that isn’t the case here.  Unfortunately, if you don’t want to feel left behind with the amount of characters available, you’re going to have to pay extra on top of the standard release.

If you can get over the basic story, poor presentation, and roster decisions, Marvel vs. Capcom: Infinite offers a ton of depth and content, along with all the fast and over the top action of its predecessor, while also being more accessible.  Marvel vs. Capcom: Infinite will not vault Capcom back to the top of the fighting game mountain, but what's there proves the company still know how to compete in an increasingly crowded genre and is generally a step in the right direction.

This review is based on a digital copy of Marvel vs. Capcom: Infinite for the PS4, provided by the publisher.

It may not be game breaking to exclude x-men, but it does feel like the game is missing something important.

I for one am glad theres no xmen, more room for newcomers. I probably wouldnt even buy it if it just had all the same characters as umvc3. Im actually more disapointed with the capcom side, only 1 new character in base game, and no felicia :/

also laura from sfv would be great. theres not enough female characters.

I wish they had started with the characters from MVC3. Omitting them was a poor decision.

All X-Men are gone. 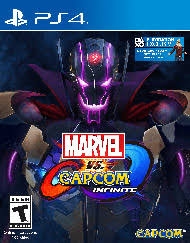 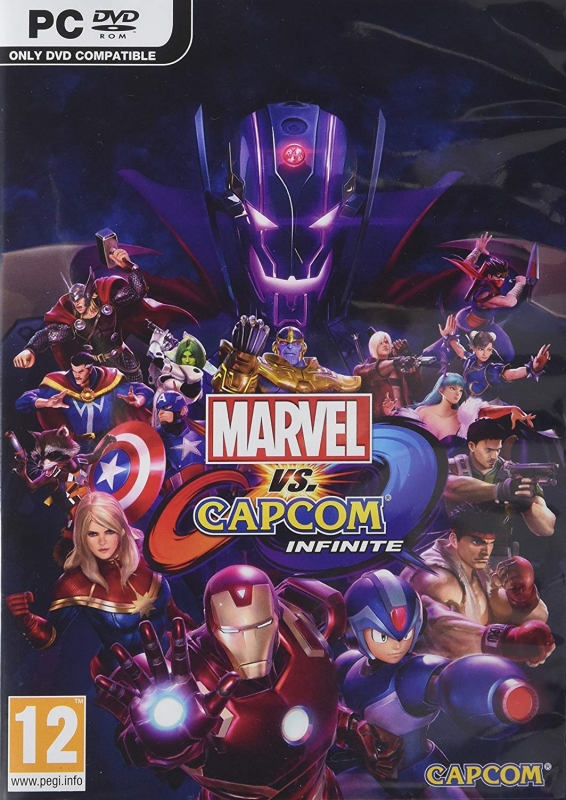