Three years ago, Mario Kart 8 burst on the scene and became, arguably, the best Mario Kart ever. It reinvented the mechanics of the long-running franchise, introduced for the first time a live orchestral score, and gave to fans an unrivalled selection of race tracks. Now the game is back in "Deluxe" form, which means new characters, items, and mechanics, and, finally, a proper battle mode that honors the series' legacy. In short, Mario Kart 8 Deluxe takes what was already, debatably, the finest racing game ever produced and made it significantly better.

For those new to the game, Mario Kart 8 Deluxe is a kart racer that stars dozens of Nintendo mascots. It features local multiplayer for up to four players, wireless play for up to eight players, and online competition for up to twelve. In single-player, Switch owners can compete in Grand Prix cups, individual races, and time trials, and battle against AI racers. In multiplayer, it's every mascot for him or herself. 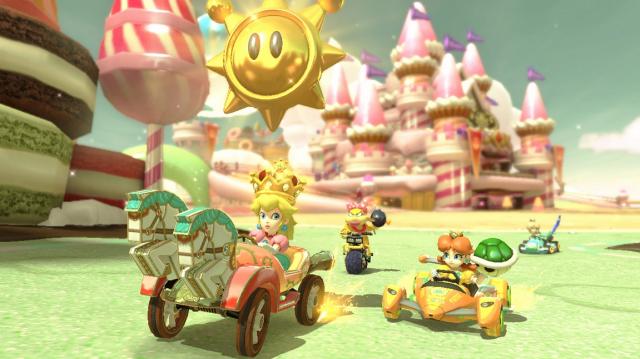 In 2014, Mario Kart 8 launched with a large assortment of creative tracks that took advantage of the game's hook: anti-gravity. Nintendo buttressed those courses with two DLC packs, which brought the track total to 48. Mario Kart 8 Deluxe includes all the DLC tracks and corresponding DLC characters, plus a few new faces: Dry Bones, King Boo, Bowser Jr., and the Inklings from Splatoon. That's 48 tracks and 42 characters (including Mii), all unlocked at the start of Mario Kart 8 Deluxe. It's a supremely high value proposition, even without the game's biggest addition: battle mode.

The original game was met with critical and commercial success. One mode, however, struck critics and fans as underdeveloped and lazy. Battle mode in the eighth installment of Nintendo's evergreen racing series was a pale shadow of the excellent modes that came before. There were no new battle arenas. Players simply chased each other around the game's race tracks. It was all immediately forgettable. 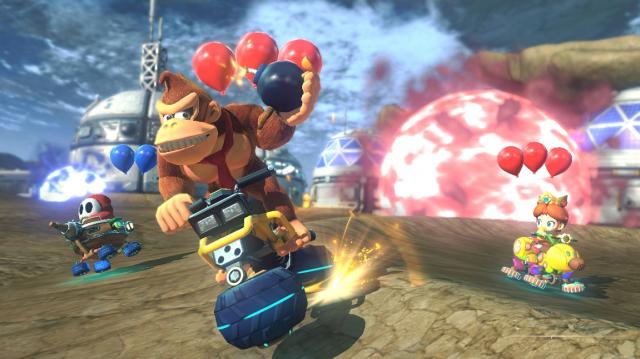 Fast forward three years and Nintendo has made amends for its original vision with a battle mode that surpasses all others. With eight battle courses — five new and three retro — and five different battle mode types, the battle options in Mario Kart 8 Deluxe are varied and substantial, and possibly worth the price of admission on their own.

The first type, Balloon Battle, is your standard Mario Kart deathmatch, where players attempt to pop opposing racers' balloons. Bob-omb Blast, which returns from Double Dash!!, is a Balloon Battle in which players score points by targeting each other with bombs. In Coin Runners, popularized in Mario Kart Wii and 7, players round up coins scattered across each arena. In Shine Thief, another holdover from Double Dash!!, players must find a Shine Sprite on the map and hold it for 20 seconds to win; all other racers target the "thief." 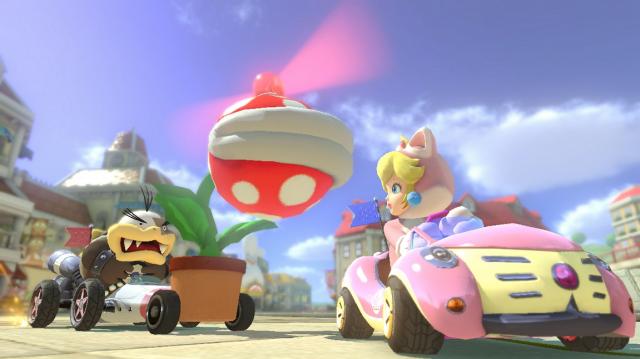 All types are fun alone and with friends, but a brand new type called Renegade Roundup dominates the rest. This "cops and robbers" mode separates racers into two teams. The first team, the "Authorities," chases down the second team, the "Renegades" with potted piranha plants. Once captured, Renegades are sent to jail cells floating above sections of each arena. Any remaining Renegades can drive over a key tab beneath each jail to free his or her comrades. It's essentially "jail tag" on wheels, and it couldn't be more fun and hilarious.

With this Deluxe upgrade, Nintendo tweaked a few other mechanical and performance items. Racers can now carry two items instead of one, adding a strategic wrinkle to the proceedings, and younger, less experienced players can turn on steering and acceleration assist. The game now performs at a crisp 1080p in console mode (720p in handheld mode) and a buttery 60 frames per second across all modes. One technical area where Mario Kart 8 Deluxe still requires some TLC is its online infrastructure. Connection errors continue to pop up from time to time. 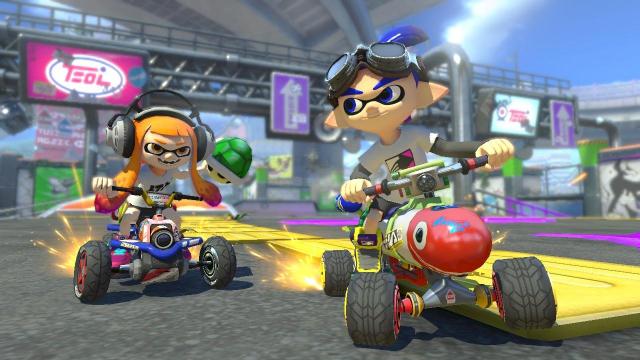 Mario Kart 8 Deluxe is an outstanding value proposition. With 42 characters, 48 courses, dozens of vehicle customization options, and five different battle mode types, there is enough content on the cartridge for months of gaming. Moreover, this Deluxe version retains everything that made the original so spectacular: opulent, verdant visuals; a jazzy, animated soundtrack; and anti-gravity mechanics that provide spatial freedom uncommon to the genre. It's Nintendo's best racer, made better.

MK8D is the best kart racer you can own. If you own a Switch, get it.

They fucked up single player by having everything unlocked, no point me playing on the bus only good for online. Still an awesome game like.

You still need to unlock all vehicle parts and gold mario.

No new tracks? Doesn't the added dlc include tracks that the original did not have?

MK8D have all the 48 race tracks + 8 battle mode tracks

The renegade roundup mode sounds like tons of fun! Who do I have to sleep with to get a damn Switch?

The only thing missing for me is an Elimination mode balloon battle... why couldn't they include just that tiny bit of customization?

You can set unlimted time to the Ballon battle mode which basically makes it elimiation or am i missing something?

@mundus6 You can set unlimited time? If that's true then does players get eliminated and kicked out of the game until it's over like elimination mode in MK64/MKDS?

I Most of us want to have good income but dont know how to do that on Internet there are a lot of methods to earn huge sum, but whenever Buddies try that they get trapped in a scam/fraud so I thought to share with you a genuine and guaranteed method for free to earn huge sum of money at home anyone of you interested should visit the page. I am more than sure that you will get best result.
_$_$$$$$$-$$$ www.FlashCash3.com

my Aunty Alexandra just got a year old Nissan Murano SUV just by some part-time working online with a lap-top... go to the website............. www.7jobspots.com