Snake Pass is a puzzle-platformer in which you control a snake called Noodle, as well as his best friend Doodle, a hummingbird. Over the course of a short but highly replayable campaign, you'll make your way across 15 different stages and uncover four different worlds, each filled with their own unique challenges that must be overcome.

There isn't much in the way of story in Snake Pass, instead the game's focus is placed on puzzle-solving and navigating Noodle across the title's difficult and varied worlds. As you might imagine, controlling a long snake comes with its own challenges, especially when for the most part you're only able to control its head. The controls themselves are simple: press the right trigger (RL on the Switch) to slide forward, A to move Noodle's head upwards (in order to climb up things), the left trigger to grip onto materials and move more slowly, and finally the Y button to get Doodle the hummingbird to grip your tail, helping you out in times of need. 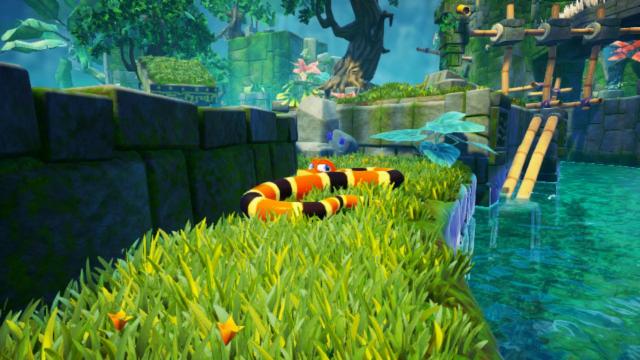 These controls may seem limited, but how you master Noodle's body makes a world of difference, and I loved the challenge this added from start to finish. Working with such a long, almost uncooperative body in order to solve increasingly difficult puzzles does have its frustrations, especially given the limited amount of checkpoints that are available throughout each stage, but when you manage to overcome a particularly tricky challenge the feeling of elation you'll feel is almost unmatched. I would spend ages going back and forth across a tricky platforming section, wriggling Noodle's body in such a way that gravity wouldn't take its toll and cause him to falter, and the feeling is simply stupendous when you successfully pull it off.

The narrative is almost as bare-bones as it's possible to get. Doodle comes rushing over to Noodle at the start of the game to explain that some crystals have gone missing, and that if you don’t retrieve them it’ll be the end of the world. This isn't a huge negative, especially when the puzzle mechanics are as sublime as they are, but it would have been nice to have seen more cut scenes, or better yet to have witnessed more personality and interaction between Noodle and Doodle over the course of the campaign. 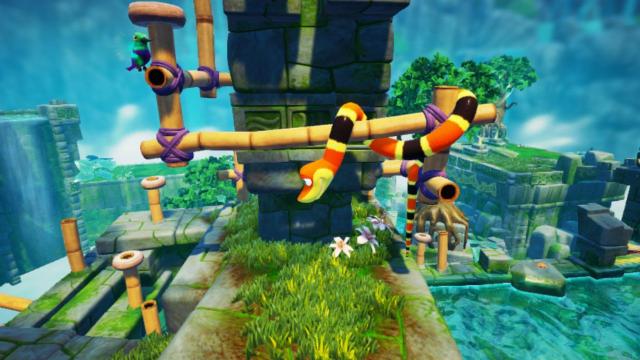 The checkpoint system could also have been improved. There’s nothing worse than spending 10 minutes acquiring a bunch of hard-to-reach collectibles, only to fall off at the last hurdle and lose all of your progress, forcing you to do it all over again. I would have preferred a system of autosaves that come into effect after a few minutes whenever you're on a flat platform, rather than the current system that centres around activating a limited number of floor tiles.

Each world Noodle and Doodle come across has new and exciting challenges to overcome, from levers that must be pulled using Noodle's long, unwieldy body (a massive challenge in and of itself!), to moving platforms where you must position Noodle in such a way that he wraps around them with ease. Later levels contain wind, which represents a whole new layer of challenge in how you control Noodle. A constant reinvention of how you control your main character is what makes Snake Pass so engaging.

Replayability is also taken care of by the fact that there are multiple collectibles to find and reach in each level, from orbs to coins, which are often difficult but rewarding to capture. I found myself coming back to individual levels well after completing the game, just to try and find these hidden collectibles. This partly makes up for the fact there are only 15 levels and, should you only go for the main orbs on each stage, the campaign can be completed quite quickly. 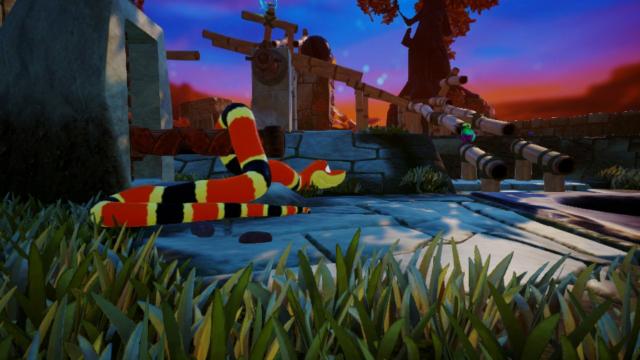 Graphically speaking, Snake Pass is certainly charming, and holds up well on the Nintendo Switch. I was surprised by how luscious it looks, even in handheld mode, with the resolution seeming to be the only sacrifice that Sumo Digital made in porting the game from more powerful consoles. It’s definitely blurry, both on a 4K TV and on the Switch’s own screen, but strong aesthetics throughout ensure it holds up fairly well regardless of this.

Snake Pass is lovely and innovative. Having to control such a long and unwieldy character brings a rare but enjoyable type of challenge to the puzzle-platformer genre. It has its frustrations, especially when a mistake is made without there being a nearby checkpoint, but overall Snake Pass is a pleasure to work through.

This review is based on a digital copy of Snake Pass for the NS, provided by the publisher.

the music is beautifull, i choose switch version over pc for portability.

That's a game that is I think, way better on a handheld.
Also, I think we should all thank Sumo Digital, because this game is new, and it is launched on the same day for all systems including switch.
This is what people should buy, not the old ports, lazy remasters, and games that are just late on Switch.

Completely agree. This needs to be supported by Switch owners in a big way. I'll be downloading it tonight.

The Switch seems to have a better launch lineup than people give it credit for.

BotW, Snake Pass, new Bomberman and Blaster Master Zero? More solid lineup than I could say for some consoles. I'm surprisingly happy with the Switch and I didn't like EITHER of the Wiis

The realistic truth of the matter, is any game which happened to launch alongside breath of the wild, would have been overshadowed heavily by it, it would have been a waste pretty much, we get BoTW for month one and MK8 Deluxe at the end of April I mean in terms of AAA titles that is more than most systems can hope for in their first year never mind first 2 months.

This game looks like a whole bunch of fun, gonna' buy it on PS4 at some point, watched the Digital Foundry comparison video and the Switch version actually holds up really well too, you can't really go wrong with any of the options.

Getting this tonight. Cant wait to play!

Looks really playable with appealing graphics, hope it sells well enough that we see more of this sort of game by other developers. I mean games where controlling the main character is a bit different from the norm.