The arcade racer is a dying breed. What once thrived in the 1990s has been supplanted by realistic driving simulations and the occasional kart racer in the 2010s. Bucking that trend is developer Vector Unit, a Californian studio specializing in arcade racing games. Known for Hydro Racing Hurricane and Riptide GP2, Vector Unit is back with Riptide GP: Renegade, a hydrojet racing game that channels the spirit of the 1990s — complete with local multiplayer.

Surprisingly, Renegade features a rather robust story, although it's on the cheesy side. Players control an up-and-coming professional hydrojet racer who's busted by his rival during an illegal street (or waterway) race. Years later, the racer returns to prove himself, taking on several challengers and setting himself up for a showdown with his betrayer. The plotline is a little clumsy and entirely skippable, but the fact that Vector Unit provided context for each race is appreciated. 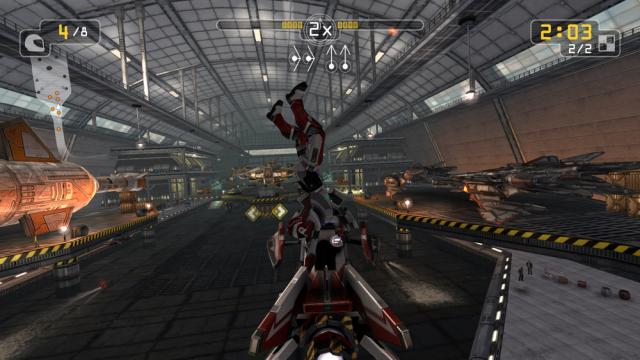 Renegade follows the standard racing model: players compete in a variety of increasingly-difficult events against computer-controlled players. Gratefully, the game provides a lot of diversity in its challenges. In addition to standard races are stunt competitions, slaloms, and elimination matches, in which the racer in last place is eliminated according to a timer.

Occasionally, during illegal races, police hydrojets show up to harass the player. This is a pain. It's easy to lose a lead or drift off course when battered about by the police, who seem to focus like a laser on the player and ignore the competition. Vector Unit could have cut the police out altogether and not lost anything as a result. 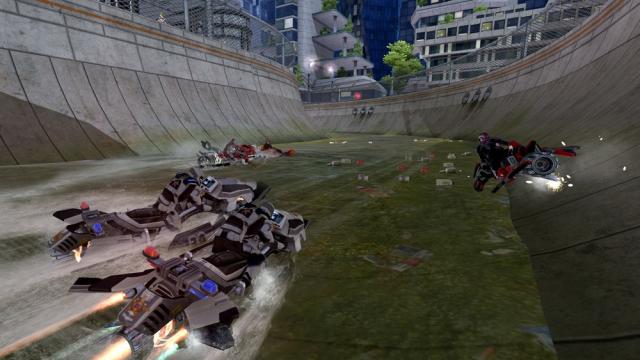 Despite police provocation, racing in Renegade is smooth and easy. Controls are responsive and uncomplicated. Performing stunts and boosting down straightaways is remarkably simple. This is an arcade racer in the truest sense: fast, accessible, and forgiving in its physics.

On the map front, it's a more inconsistent verdict. Some of the tracks are interesting and even eye-popping. One takes place in a spaceport with a giant shuttle blasting off and shaking the foundation. Another has racers sailing through a naval assault on a fortress. Other tracks are far more flavorless and generic. It's a mixed bag. 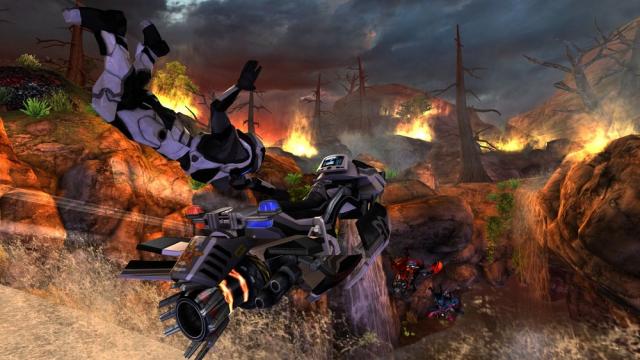 One of Renegade's most attractive features is its suite of customization options. Players can modify the color, number, and logo of their hydrojet. Once they beat "boss" characters, they'll begin to unlock new playable characters and jets. Using credits earned from races, players can improve the acceleration, handling, boost, and top speed of each jet. There's always something new to unlock or upgrade.

Renegade is a serviceable nod to the arcade racers of yesteryear. Its racing mechanics are fluid and easy-to-learn, its customization options robust, and its offline and online multiplayer modes a plus. However, it's let down somewhat by a handful of lackluster maps and annoying police intervention. Overall, it's a decent but unspectacular arcade racer. Those nostalgic for the 90s or eager to play a modern wave racing game should give it a look.

This review is based on a digital copy of Riptide GP: Renegade for the XOne, provided by the publisher.