The proliferation of indie development in recent years has resulted in an explosion of new and original games. Now, anyone who cares do so can sit down at home, download a free video game engine like Unity3D or Unreal, and proceed to make the game they’ve always wanted to create. Eventually, of course, tried and tested industry veterans decided to strike off on their own as well, dropping out of AAA studios in order to take advantage of these creative opportunities. Which brings me to Knee Deep, a game created by a small group of North Carolinian misfits comprised of both senior industry figures and first time developers. 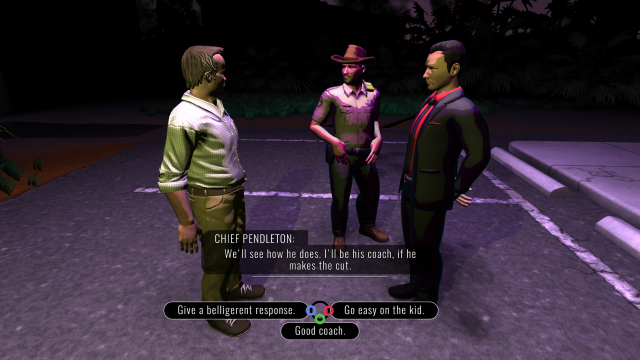 Knee Deep is an adventure game that follows three protagonists as they investigate what happened to an actor who committed suicide in the small town of Cypress Knee. You control Romana Teague, a cheeky blogger who gets thousands of hits on her website; “Fanrage”, Jack Bellet, a reporter working for the local newspaper; and K.C. Gaddis, a private investigator. Each character has his or her own historical connections to Cypress Knee and motives for uncovering the truth behind the weird happenings in the game's small Floridian town.

Over the course of Knee Deep's three acts you’ll need to steer conversations down specific roads and make decisions that will determine what your next course of action will be. Each choice you make, and each report you file, changes the way some of townspeople interact with your characters, ensuring for example that you’re constantly on edge as to whether you should tell the truth in a blog post or cover it up. The game forewarns you that the overall story will still playout regardless of what you decide to do, but your acts will determine how much you discover about Knee Deep's various characters and their motivations. 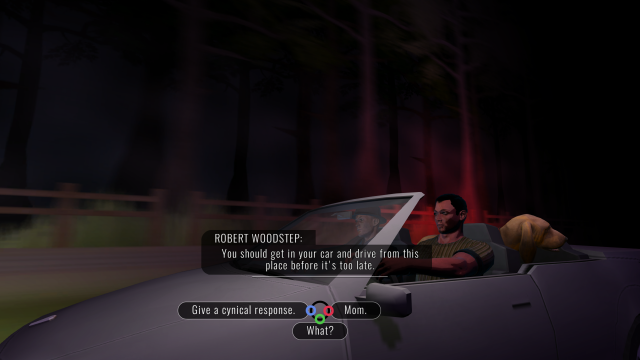 Speaking of the story playing out regardless of your decisions, did I mention that Knee Deep was a play? Yep, the entirety of Knee Deep takes place on a stage, so each character, set, and plot point is choreographed within the context of a stage show. This is a key reason why the game doesn’t look very inspiring in screenshots - the core value of Knee Deep is in its narrative and context, with presentation taking a rather fitting back seat.

Taking advantage of this unique setting, Knee Deep pushes you, the player, to partake in the show itself. While you control the game's three main protagonists for the most part, there are also times when you’ll get to choose the next verse of a song, or pretend to be a member of the audience. It’s a little surreal when it’s happening, mind you, but it works to makes the stage selling all the more believable and fanciful. 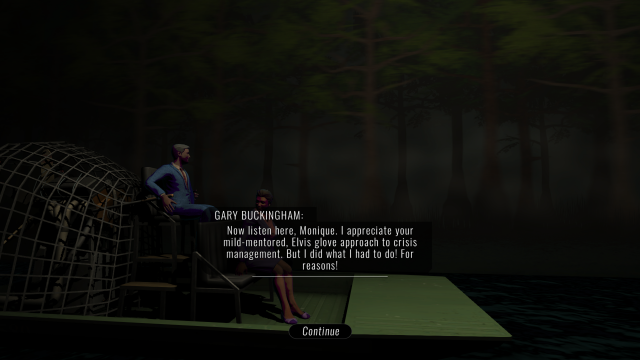 There are some clear advantages to the stage concept, not least of all the fact that it saves time and money for the developer. Unfortunately this shows through - Knee Deep really doesn’t look good. Character models look like stock assets bundled with a game engine and struggle to effectively convey emotion or interact naturally with others. There were so many times where I would be witnessing a scene and wishing it had more depth and character interactivity; it's difficult, after all, to feeling anything for two fairly inanimate models that are repeating the same stiff and unbelievable actions over and over again on the screen.

Another issue with Knee Deep is some of its dialogue. There are several interactions that feel like they jump all over the place, with characters talking about a given subject matter in one instance and then in the next talking about something completely unrelated. The dialogue choices can also seem weird; there were many instances where I would choose what I thought was a good option, only for the character I was controlling to suddenly shout/swear at the NPC. On top of those problems is the fact that about 75% of the information you'll seek from the world is actually hidden behind menus and not actually spoken.

For example, an NPC may mention a location you need to visit. He or she won't then tell you how to find this place, or give you any clues even; they'll simply end the conversation and leave you to your own devices. At that point it's up to you to work your way through the game's menus in order to find out more about the location. Had this information been contained somewhere within the dialogue trees with the original NPC instead it would have felt much more natural and believable. 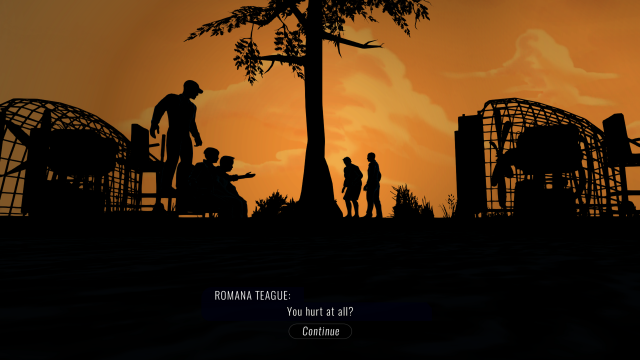 One particular highlight of Knee Deep is its soundtrack. Every moment of my playthrough felt like it was based in a small Floridian backwater town thanks to this absolutely stellar score - one which I'll be listening to for some time to come - and it even reminded me somewhat of the Borderlands soundtracks, so if they're your cup of tea then Knee Deep will certainly satisfy you on that front.

Despite the issues I've identified above, Knee Deep is a great murder mystery adventure game with a very unique setting and enough dialogue paths and decisions to keep you coming back for more beyond your first playthrough. I hope that Prologue Games manages to make a sequel; with many of its flaws dealt with this has the potential to be a fantastic adventure series.

This review is based on a copy of Knee Deep for the XOne, provided by the publisher.