It’s a shame that the rhythm genre burned itself out so quickly in the previous generation of consoles. There’s something methodical, almost calming about watching notes come towards you and hitting the correct buttons in sequence that's hard to replicate in other genres. With Guitar Hero and Rock Band combined almost destroying the genre that made them so big, it’s always a pleasant surprise when indie titles try to step into the vacuum they've left behind in their wakes. 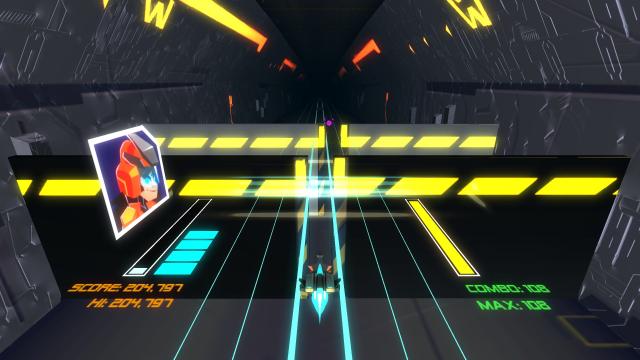 In Stereo Aereo you play as a rock band that is trying to get to a gig and must do so by dodging obstacles in tune with the music that plays in the background. The set-up may sound unusual, but the aesthetic and gameplay actually closely mimics that found in the Rock Band and Guitar Hero franchises. There's a never-ending 'waterfall' with your ship at the bottom of the screen. Using a controller or keyboard you must strafe left and right across the waterfall's five lanes. Each level boasts different thematic obstacles that you must avoid, and on each difficulty level you're only allowed to collide with a set amount of them before you fail and have to restart. Avoid enough obstacles in time with the music, however, and not only will your score multiplier increase, but you’ll also get one of those lives back, giving you a chance to redeem yourself should you mess up.

This gameplay loop can be quite compelling, and it successfully pushes you to conquer levels without ever being hit and causing a skipped beat in the song. There's a feeling almost of euphoria when you manage to synchronise your actions to the music and an entire level can easily pass you by without you even realising where the time has gone. This would actually make up the majority of Stereo Aereo were it not for the fact that the game's flaws break the sense of immersion to such an extent that you'll experience annoyance more often than you experience nirvana. 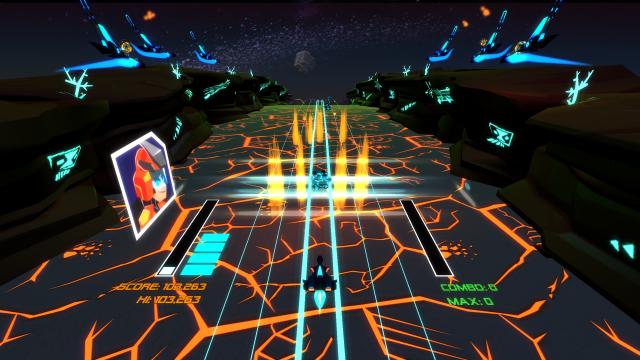 Firstly, the simplistic graphics are both a blessing and a curse. While the comic book aesthetic that's used in the cut scenes is fantastic, it's in stark contrast to the bland, blocky models that are used in the actual game.  They're not just poor in and of themselves, they also negatively impact the gameplay.

For example, in the first two levels you’ll be avoiding cars as you make your way through a city. That's fine - these cars contrast sufficiently with the stage backgrounds that they're easy to spot and avoid. It becomes a problem, however, when a second type of vehicle appears that has to be shot at. This new vehicle type is almost identical in look as the first, which makes it difficult to distinguish between the two. Simply introducing different colour schemes for the different car types would have done wonders to have reduced the level of frustration felt playing through Stereo Aereo. 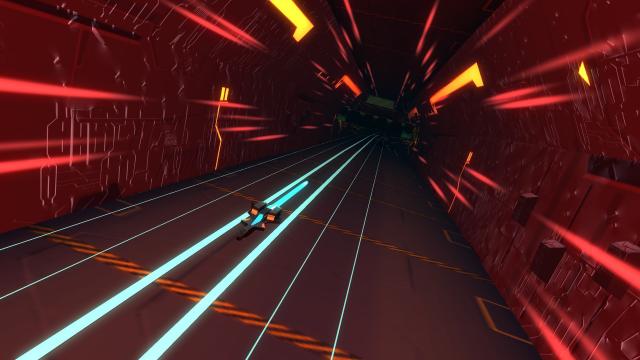 This isn’t a one off either, and similar issues pop up over the course for the campaign. In one stage, for example, you have to avoid explosions that surge up from the ground. The explosion animations are so slow, however, and the particle effects so overdone, that it can become nigh-on impossible to actually navigate past them. It’s as though the developers at The Stonebot Studio were so wedded to the aesthetic they'd designed that they ignored its impact on the gameplay.

The narrative also disappoints. The band in Stereo Aereo needs to reach its destination in order to get its 15 minutes of fame, but along the way the group is chased down by all manner of villains from space pirates to police vehicles and rock queens. It's a zany but not necessarily bad premise for a fun rhythm game. Unfortunately there's no real conclusion to the story that's told; at the end nothing happens, there's no climax and the player is left with more questions than answers. 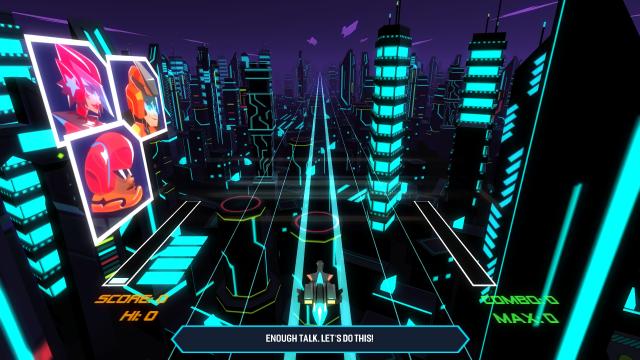 Finally, with any rhythm based game you’d expect an engaging and well-collated soundtrack; one that keeps you entranced as you work your way through the title. Unfortunately this is not the case with Stereo Aereo. Indeed the soundtrack is one of my biggest grievances with the game as it's simply uninteresting and merely provides a beat for you to match as you navigate your ship. This is a huge shame as it's an area of the game that should have kept players coming back time and time again.

Stereo Aereo really could have been an excellent indie rhythm title. It has a good core, and a unique art style, but the game's flaws outweigh everything else, unforgivably taking you out of rhythm rather than keeping you in it.

This review is based on a digital copy of Stereo Aereo for the PC, provided by the publisher.

Never heard of this game before. WHat made you want to review a clearly bad game over Planet Coaster and other titles that released on PC during that time?.

looking back on the list of PC reviews, you either choose multiplat titles or really cheap looking unheard of indie games or rehashes like Pac-Man. Seems really odd to me, especially with what Destructoid and PCGamer review.