Infinite Warfare has a shaky history. Its reveal trailer, released earlier this year in May, is currently the second most disliked video on YouTube, with 3.3 million dislikes. Many fans expressed outrage over the game's futuristic, sci-fi setting after years of asking for "boots on the ground" twentieth century warfare. Was the fury unleashed on developer Infinity Ward and publisher Activision warranted? That depends entirely on whether you play Infinite Warfare for the single player campaign or for competitive multiplayer.

Starting in 2007 with Modern Warfare, the Call of Duty franchise has gradually become a multiplayer-first affair. Not many gamers are rushing to stores on launch day to play a new six hour campaign. Rather, they're investing $60 for the promise of hundreds of hours of competitive multiplayer, complete with perks, loadouts, and progression systems. Infinite Warfare, however, turns this dynamic completely on its head. Multiplayer in Infinite Warfare is slow, unfocused, and burdened with a borderline broken matchmaking system. 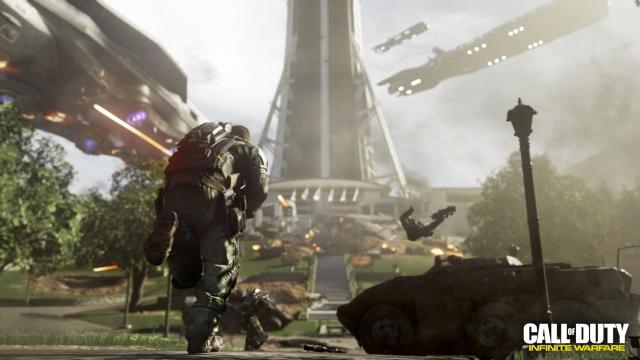 Its campaign, however, is a thing of beauty. It is, in fact, the best single Call of Duty campaign ever produced — a shocking development considering the game's poor pre-launch reception and Activision's own mishandled marketing. Set far in the future, Infinite Warfare follows a war between the United Nations Space Alliance, a federation of Earth governments, and the Settlement Defense Front, a militant group of separatists based on Mars.

What makes the campaign so great, ironically, is the way in which it departs from the standard Call of Duty formula. There are very few scripted scenes or quick-time events, and the action almost never feels guided or on-rails. Rather each level feels like a sandbox that encourages and rewards different play styles. Players can rush into enemy encounters with guns blazing behind a retractable shield, or use mechanical rigs to hover and wall-run in order to outmaneuver foes. 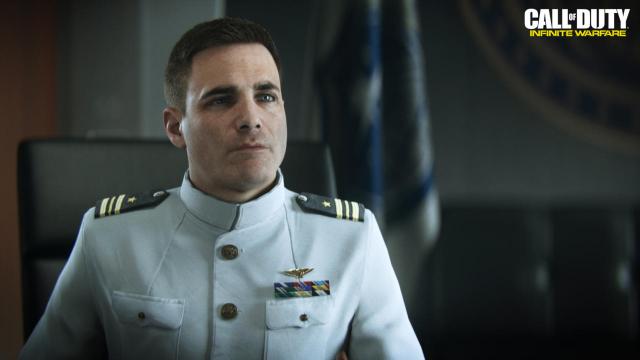 In another major departure for the series, Infinite Warfare features a hub world of sorts. Almost every mission in the game starts and ends on the UNSA space cruiser Retribution. As its captain, Nick Reyes, players will issue commands, engage in front-line combat, and even occupy a Star Trek-esque "ready room." From the bridge of the Retribution, players can access a map of the solar system (think Mass Effect) from which to launch primary and secondary missions.

These missions include story objectives and optional side-quests. Players can opt to rush through the story and ignore the side content, but do so at their own risk. The side missions, which take place from Mercury to Pluto, and which are playable in any order, reward players with weapon accessories and ship upgrades. Plus they're a blast to play. 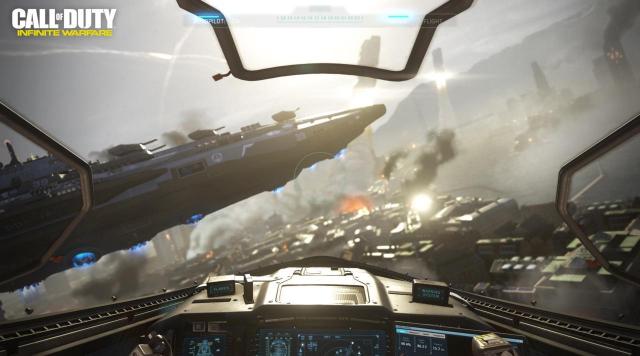 There are three main mission types in Infinite Warfare: infantry missions, Jackal strikes, and ship assaults. Infantry missions are your standard Call of Duty experience, although made more engaging with awesome futuristic weapons and items like the gravity grenade and retractable shield. Jackal strikes task players with piloting a Jackal snub fighter in space against SDF fighters and cruisers. Ship assaults, the coolest of the bunch, feature Reyes and others boarding SDF ships in zero gravity.

With an intriguing sci-fi storyline, huge mission variety, and light simulation/management mechanics, the campaign in Infinite Warfare is something special. Players can easily spend as many as twelve hours exploring the Milky Way and taking down SDF bases and ships. Part Mass Effect, part Battlestar Galactica, it feels truly like an ongoing war of attrition, with small skirmishes being won and lost across the stars. 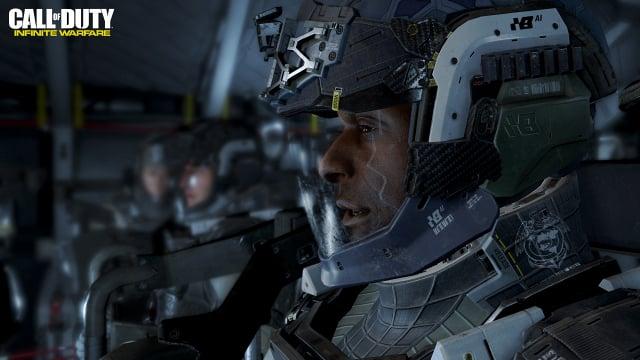 So that's the single player campaign, which alone is worth the price of admission. On the multiplayer front, things are far more troubled. Where the campaign in Infinite Warfare is progressive and packed with new mechanics that flow perfectly with the scale and rhythm of battle, multiplayer is decidedly regressive and stuffed with a lot of half-baked mechanics and superfluous loot.

Over the years, the wardens of Call of Duty have insisted that more is better when it comes to competitive multiplayer. More perks, more killstreaks, more stuff. Infinite Warfare is the latest in a long line of overstuffed multiplayer modes. The class system of Black Ops III returns in the form of rigs, each of which has a unique power move. Don't expect anything as interesting as the class system in Team Fortress 2 or Overwatch, however. Each rig looks more or less the same and the power move is basically just another killstreak. 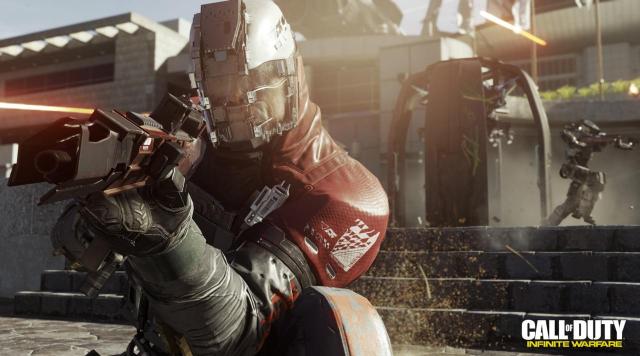 Equally frustrating is the fact that the mechanics that worked so well in the campaign are under-developed in multiplayer. Wall-running and sliding is slow and awkward, and often counter-intuitively detrimental. Maps aren't designed in a way to accommodate the increased verticality of the game, often blocking access to areas that should be accessible by jet pack. Guns are poorly balanced and the game's matchmaking system, which will pit newbies versus the most hardened veterans, is unforgivably bad.

Overall, multiplayer in Infinite Warfare feels like a collection of mechanics Infinity Ward cribbed from other series, for example Overwatch and Titanfall. That's not the worst part, though. That dubious honor goes to the game's loot progression system, which is fundamentally broken and essentially "pay-to-win." By collecting salvage from winning matches and achieving objectives, players can invest in dozens of weapon mods which, unfairly, offer improvements with no downsides. Gone is the idea of guns that are "different, but not better." 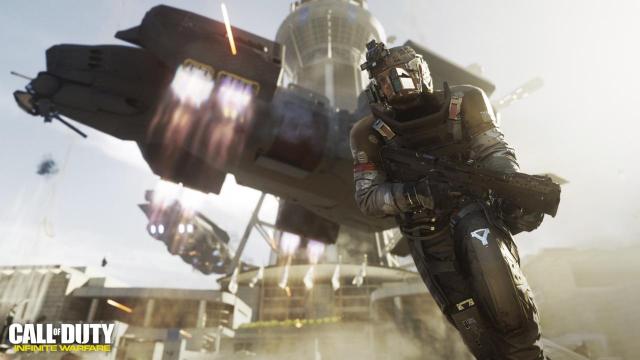 Apart from a single player campaign and competitive multiplayer, Infinite Warfare hosts a clever and addictive Zombies mode, in which waves of the undead attack up to four players fighting cooperatively, both online and offline. The production values in this mode, which features voice acting from Paul Reubens, Seth Green, and Jay Pharaoh, is outstanding. The entire mode takes place across "scenes" from a B-movie called Zombies in Spaceland.

Infinite Warfare is a tale of two games. Judged only by its single player campaign, this latest Call of Duty is game-of-the-year material. Judged only by its multiplayer, the game is a jumbled, crowded mess with inferior matchmaking and unbalanced guns — cardinal sins for a competitive shooter. Somewhere in the middle is Zombies mode, which boasts a great sense of humor and lots of replay value. So, in short: solo and co-op players welcome; multiplayer fans need not apply.

This review is based on a retail copy of Call of Duty: Infinite Warfare for the XOne

Matches with my own thoughts about the game. The campaign and zombies modes are great, the multiplayer is meh at best, mainly due to the pay to win BS. Never had any issues with the matchmaking though, I got into matches quickly and rarely got dropped from a match.

Zombie Mode is the only aspect of the series I care about.

Finishd campaign it yesterday. Its shit. too many cutcenes and scripted events. Infinite Ward is the worst after MW2. They make now every cods campaign so annoingly spectacular with ridontountly many explosion and that annoiyng screen shaking. I cant conzentrate on shooting the enemy. the stoory is shit as well so long and many cutcenes where clearly put lot of work into it. MOtion cap and facial impressions, but it all doesent mather if stoory aka dialogues are UTTER CRAP AND BORING!!!!!!!!! Melodrama every corner FUCK THIS SHIT!
Advanced Warfare way better that this Horse SHIT!

Finishd campaign it yesterday. Its shit. too many cutcenes and scripted events. Infinite Ward is the worst after MW2. They make now every cods campaign so annoingly spectacular with ridontountly many explosion and that annoiyng screen shaking. I cant conzentrate on shooting the enemy. the stoory is shit as well so long and many cutcenes where clearly put lot of work into it. MOtion cap and facial impressions, but it all doesent mather if stoory aka dialogues are UTTER CRAP AND BORING!!!!!!!!! Melodrama every corner FUCK THIS SHIT!
Advanced Warfare way better that this Horse SHIT!