With just 14 days to go before the 15th mainline entry in the Final Fantasy series - Final Fantasy XV - finally launches worldwide, we thought we'd take a beginner's look at the title which looks set to fire up the charts for the next for weeks.

Final Fantasy XV, despite being part of one of the most storied and complex gaming dynasties around, is actually intended to be a very newcomer-friendly title. As is traditional with mainline Final Fantasy titles, the game features a novel cast and setting, but where it really intends to broaden the series' appeal is in its adoption of a more open world which should feel comfortable to fans of Western RPGs. 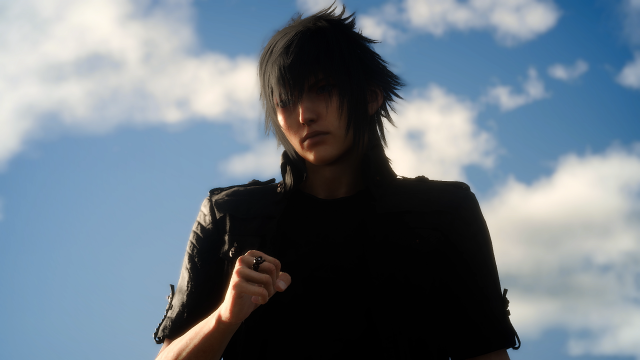 Final Fantasy XV follows the story of Noctis Lucis Caelum, the Crown Prince of the Kingdom of Lucis, who embarks on an epic quest to reclaim his homeland from the conquering clutches of the imperial army.

Noctis is joined on his travels chiefly by his three closest friends and advisors: Ignis, Noctis' chief advisor, who is smart, tactical and cool-headed; Prompto, a relaxed commoner who became friends with Noctis as a teenager; Gladiolus, the strong man of the group who is surprisingly light-hearted and cheerful; and other guest characters will also join your party from time to time.

The game is set on the almost Earth-like world of Eos, which is divided into five different, hostile nations. Noctis' homeland of Lucis is the only one of the five with a society based around the use of magic, thanks to its possession of the last remaining magical crystal on the world.

The other nations, dominated by Niflheim, developed technologically in order to compensate for the lack of magic and it is through the development of weapons technology in particular that the nation of Niflheim has been able to conquer the others, led by the Emperor Iedolas Aldercapt and his mysterious and enigmatic chancellor Ardyn Izunia. 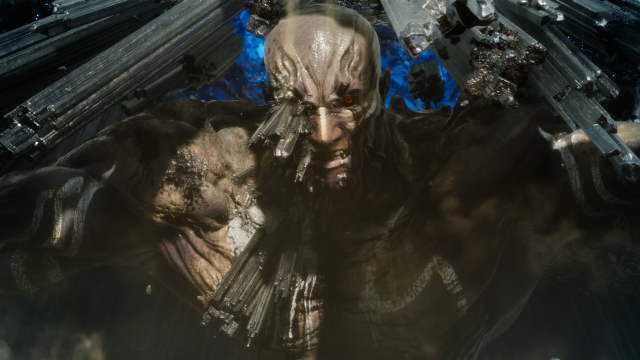 At the start of the game Lucis is invaded and rapidly conquered by Niflheim under the cover of the signing of a proposed peace treaty. Noctis' family is murdered and his homeland conquered, and so he sets out on a mission of retribution and liberation.

The game features an enormous open world, large parts of which we've seen in the run up to the game's release, such as in the gameplay video below:

Noctis and his companions travel relatively freely across the world - both on foot, by Chocobo, air, and in the much-publicised Regalia car - taking on foes and wildlife, meeting new people and settlements, and exploring the world of Eos. 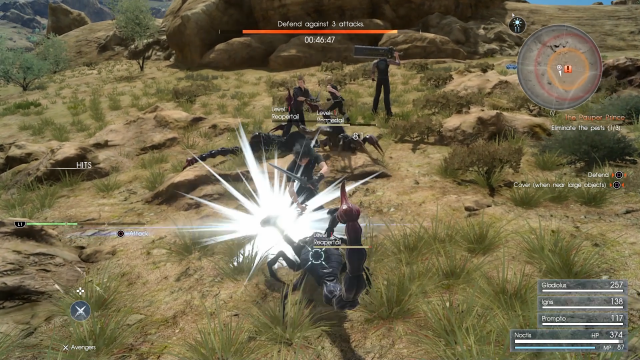 In terms of combat Final Fantasy XV employs a seamless real-time battle system called the 'Active Cross Battle (AXB) system', with a minimalist interface that separates it from traditional JRPGs, with commands instead being mapped to individual buttons on the controller.

Noctis is the sole playable character but his companions will help you out in battle, and as your bond with those characters develops over the course of the game you'll be able to perform more powerful cooperative abilities with them.

Noctis will also have access to a wide range of different weapons (known as 'Arms' in the game) and spells, from swords and daggers, to guns and other weapons of war, and will be able to select from four key weapons or spells chosen by the player on the fly.

It's not just your companions that will help you out in battle either; you can summon creatures called Astrals that are typically obtained by first defeating them in battle.

It's becoming increasingly the case that large game releases aren't just confined to the games themselves but are accompanied by a whole raft of other promotional media that ties in to the story, and that's certainly the case for Final Fantasy XV.

First of all there's a full-length CGI movie called Kingsglaive: Final Fantasy XV, which premiered back in June and is now available to purchase or rent. Kingsglaive takes place alongside some of the events of Final Fantasy XV, but instead of focussing on Noctis it follows his father, King Regis.

Secondly there's an anime called Brotherhood: Final Fantasy XV. As the name implies the anime explores the relationships between Noctis and his friends, further fleshing out their back stories in the process ahead of the game's launch. You can view all five episodes via YouTube.

If that's not enough to tide you over then there's also a CGI short called Omen, which was created by the team behind the CGI movie and can be viewed below, a prologue demo called Platinum, which is available to play on PS4 and Xbox One, and finally a number of smaller side games including most notably A King's Tale: Final Fantasy XV - a 2D side-scroller that launches alongside the main game.

Only time will tell exactly how Final Fantasy XV shapes up in the history of the franchise, but what is not in doubt is that it represents a brave new direction for the series. Which is rather fitting given the series' origins and development over the years.

Great read, Machina. Surprisingly positive as well :P I hope you that will review the game.

The story sounds interesting, and I really want to watch the movie (Sean Bean FTW!), but otherwise the game just doesn`t really appeal to me. Will probably get it one day, but not a day 1 purchase this time, which has actually become a trend for FF games for me...