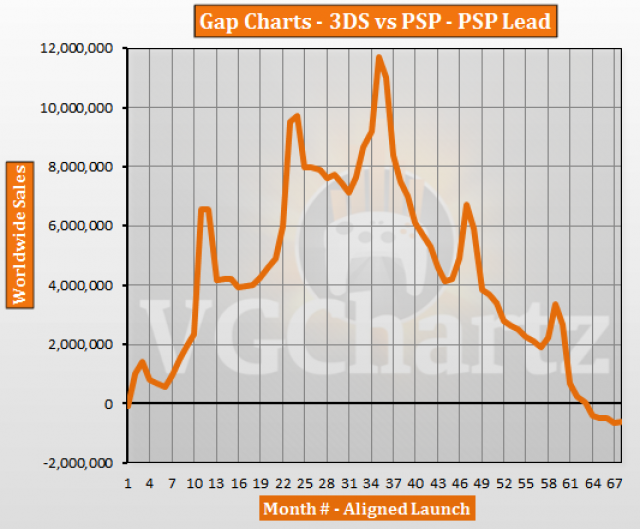 An important note is that the two handhelds launched at different times of the year. The PSP first launched in December 2004, while the 3DS launched in February 2011. The 3DS has sold 59.98 million units in its first 63 months, while the PSP sold 60.61 million units.

The psp was an often overlooked absolutely great selling underdog alongside the NDS, I mean it ended up selling close to the number of units as the Ps3/360 by the end of its life.

I just mean in terms of perception and shop space it earned, even during it's heyday here it barely had one section of gamestop shelving with it's games on it, in comparison to about 10 times that amount between Xbox360 and ps3, you would think that was normal if it was a system which sold half or quarter what those consoles did.... but the PSP sold the exact same amount.

Perhaps it was different in other countries and the PSP had the same amount of shop space as the consoles last gen. but here it had around the same space which the Vita / Wii-U gets now, definitely not being represented as a console with 80million players.

The longer lifespam of the PSP is what's going to seal this. 3DS will be back at the top again thanks to Sun/Moon and maybe MH XX, but it just can't reach 80m units sold when the Switch is so close. Sooner or later, the PSP will pass it again.

Problem with PSP is it is trying to bring PS2 experience into portable form instead of gaming system with its own appeal like Nintendo did. Sony repeat same mistake with PSVita. Thats why a lot of PSP/Vita games also available on its big brother.

Most interesting battle... Even more after pokemon go boost! Although, PSP had beasty legs, it was even outselling it successor in 2013... 3DS should end with 10-12m less than PSP ( 70m-72m ). Unless it approaches that number with a bigger than expected growth in sales this holidays, thanks to Pokémon go /Pokémon Sun and Moon/and possibly super Mario run , or switch not affecting considerably its sales in the long run ( albeit it's not certain if it's replacing it) . If so, it should sell 5-7m less than PSP and GBA . ( Excuse me, I'm putting paragraphs but the comment appears like I 'm not )