Ten years ago, Microsoft published Gears of War to critical and commercial acclaim. It provided the Xbox 360, less than 12 months old at the time, with its first "killer app." It sold a million copies in two weeks and unseated Halo 2 as the most popular game on Xbox Live. Now, a decade later, the fifth installment in the series, Gears of War 4, has done a similar service for the Xbox 360's successor, the Xbox One. After almost three years on the market, Xbox One finally has its "killer app."

This was hardly a fait accompli in the months leading up to launch. The Gears series had gone three years without a new installment. Microsoft had recently purchased the intellectual property and assigned it to an unproven studio in The Coalition. A lot of things could have gone wrong. Yet, amazingly, almost everything went right. Gears of War 4 is a worthy successor to one of the best video game trilogies of all time. It honors the series' history and characters while adding new mechanics and scenarios that make the experience refreshing and newly rewarding. 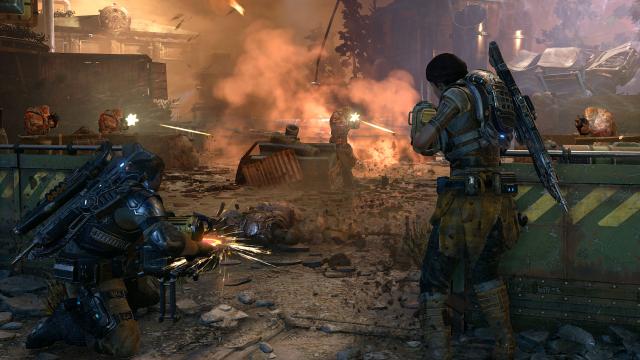 Set roughly 25 years after the events of Gears of War 3, this fifth Gears game follows the adventures of JD Fenix, son of decorated veteran Marcus Fenix, the main playable character in the original trilogy. Along with his friends Kait and Del, JD must fight a monstrous new enemy.

Gears of War has never featured Shakespearean writing or deep, complex narratives. Often the games rely on the standard soldiers versus monsters storyline that moves players from point A to point B and beyond. Yet throughout the series there have been many moments of genuine joy, sadness, and regret. Under Gears' testosterone-fuelled facade is a beating heart. Gears 4 is no different. Among the head shots and rivers of blood is a story about tradition, loyalty, sacrifice, and, above all, camaraderie. 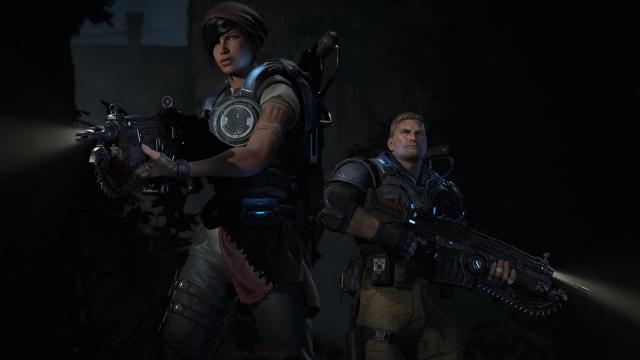 In fact, Gears 4 might have the most involving and nuanced story in the series — although it comes at a price. The writers at The Coalition spend so much time in the opening act world building that gameplay suffers as a result. This is a common flaw with games that place a premium on storytelling; The Last of Us and Uncharted 4 started slowly, also. Fortunately, starting with act two, Gears 4 slides into a groove and doesn't let up until the final credits roll.

Although Gears 4 marks a franchise high in terms of storytelling, it suffers somewhat in the composition of its platoon. In the original trilogy, Epic Games found great chemistry among the soldiers of Delta Squad. Each character had a unique and sometimes conflicting personality. Dom's earnestness worked well with Marcus' gruff pragmatism, which collided with Baird's sarcasm, which was mitigated by Cole's gregariousness. In Gears 4, however, most of the characters are smart-asses who spout a lot of eyeroll-inducing banter. Imagine a fireteam composed of four Damon Bairds and you get the idea. 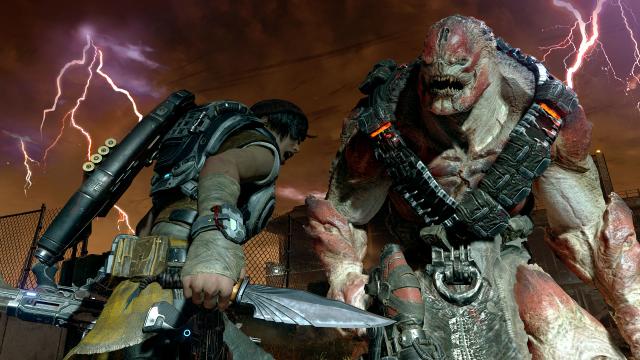 As with other Gears games, Gears 4 is a cover-based third-person shooter. Using a variety of deadly melee, projectile, and explosive weapons, players will fight through 20+ levels filled with robotic sentries, monsters, and monumental bosses. The Coalition has retained the basic formula that made Gears a fan favorite — moving in and out of cover; improvisational gunplay; spectacular set-pieces; a mix of infantry and vehicle missions — while incorporating several new features that add depth and complexity to enemy encounters.

One new feature is weather. Epic Games had flirted with the idea of weather influencing gameplay in Gears of War 2 with a razorhail storm, but in Gears 4 The Coalition goes several steps further. Sometimes during battle, a windstorm will flare up causing debris to fly across the environment. Players can use storms to their advantage by shooting free detritus that, once loose, is carried by the storm into enemy units. At the same time, players must adjust grenade throws for the direction of the wind, and must avoid lightning bolts that travel across the ground. 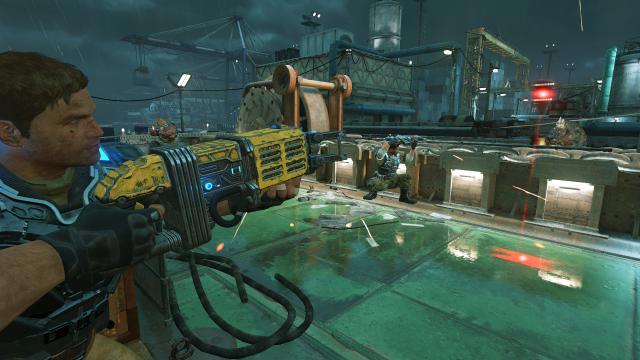 Along with added weather effects, The Coalition has, by introducing new mechanics and weapons, dramatically changed the nature of cover in Gears of War. The first of these is "yank," which allows players to reach over cover and pull an enemy or opponent to his side, opening a window for a quick execution. The second is "vault kick," in which a player can run at cover, leap across and stun his rival, and, naturally, perform an execution.

In addition to these mechanics, Gears 4 features two new weapons that make cover less safe than ever before: Dropshot and Buzzkill. Dropshot allows players to fire a high explosive across the map and detonate behind enemy cover. Buzzkill allows players to ricochet sawblades around cover. What all this adds up to is a Gears experience where moving from cover to cover has never been more important, both in the single player campaign and in versus multiplayer and Horde mode. 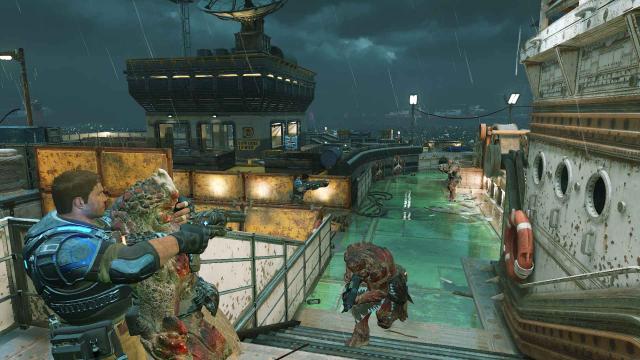 Speaking of multiplayer, it's as brilliant as ever in Gears 4. The game modes you know and love are back, along with a brand new mode called "Escalation," in which players vie for control of three rings and respawn timers increase by two seconds after each round. Perhaps the most significant addition to multiplayer, which can be played online or via split-screen, is co-op versus, where a fireteam of five people fight against increasingly punishing AI teams. It's the perfect mode for folks who want to avoid the cutthroat competition online.

Whereas the campaign in Gears 4 operates according to a 30 frames per second cap, multiplayer action is set to a buttery 60 frames per second, which makes online firefights even faster and more frenetic. That said, all modes in Gears 4 — whether campaign, co-op, or multiplayer — perform amazingly and look gorgeous. There is no screen-tearing to speak of, and very few, very short moments of slowdown or texture loading. All modes taken together, Gears 4 is simply one of the best-performing, best-looking, and best-sounding Xbox One games on the market. 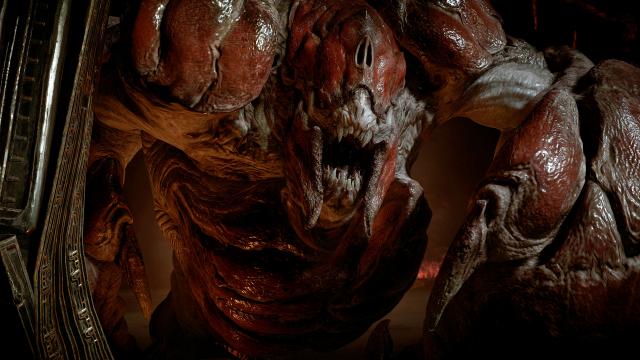 This technical brilliance extends to the revamped co-op mode Horde 3.0, which allows players to choose a specific class. Each class — soldier, sniper, scout, heavy, and engineer — starts with a unique load out and skill set. A scout, for example, searches maps for "power," which is used to buy fortifications. Snipers are rewarded for pulling off head shots. The engineer is responsible for repairing fortifications and supporting other players. Each class comes with skills in the form of cards, which are unlocked in gear packs, which can be purchased with in-game currency or, for the impatient, real world money.

For three years, Xbox One has been growing in fits and starts. At long last it has a true "killer app," a game with many outstanding competitive and cooperative multiplayer modes, both online and offline; luscious visuals; best-in-class shooting and cover mechanics; and a thrilling, diverse campaign with genuine emotion and massive set-pieces. Rich in content and a joy to play, Gears of War 4 is one of the year's best games and, arguably, Microsoft's greatest eighth generation exclusive so far.

This review is based on a digital copy of Gears of War 4 for the XOne, provided by the publisher.

Sounds good, I'm not a Gears fan but I might just give this a try.

Amazing, I can't wait to get my chainsaw running

not sure if i can put url links here but look for H2ODelirious on youtube as he and CaRtOoNz are doing a play through of the co-op champagne, even if you only watch the first episode it gives you a good idea of what the game looks like and from what ive seen so far it looks awesome.

Great article. It sounds like you know how gears story works, so I'll take your word that the story is better than ever. 4 Bairds will be tough to handle though.

Thanks :) I hope you like it as much as I did. In a way the story reminded me of The Force Awakens, in that the game makers found a way to honor the old guard while, at the same time, introducing new blood. Having said that, the constant one-liners and sarcastic quips get old. Fast. You only need one comic relief. Not three or four.

The guy who wrote this review notoriously hates stories in games so I don't find his criticism of it very credibile.

gears of war 1-3 are better. the new story is a joke for me and the new characters boring. gameplay is okay (my friend& i play only the singleplayer yesterday)

The game is not out yet.. Not sure how your playing the Single player haha

What's your XBL, curious to see what achievements you've unlocked so far :o

@Raven I don't think he has an Xbox One.

I can confirm I played with him yesterday, the game became bad for me when Jesus jumped down onto the battlefield wearing a fallout 4 power suit and proceeded to destroy the enemy with 2 miniguns, killed the challenge for me really =/.

i played gears 4 at EGX but it was only a single mission, hell knows how you've played the single player champagne when the games not even out yet and what i played was still work in progress!

Like people have never played a game early or something. Street dates never get broken right? Of course the obvious answer if it's not positive about the game then he must not have an X1. These replies are both typical and sad.