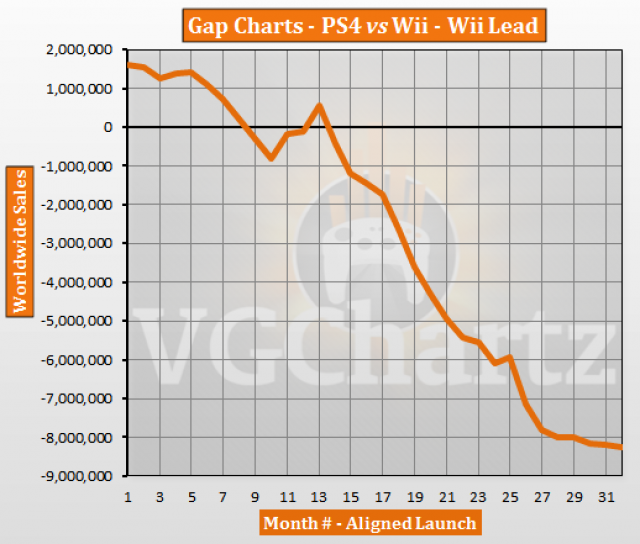 June 2016 is the 32nd month that the PlayStation 4 has been available for. During the latest month the gap grew in favor of the Wii when compared with the Wii’s 32nd month on sale. The gap increased by 47,738 units in the last month and 3.92 million units in the last 12 months. In the first 32 months, the Wii currently leads by 8.24 million units.

The gap has been growing by a much smaller margin in the last five months. It grew by 429,984 units in five months. There were many months where the gap grew by more than 500,000 units.

Wii Sports Resort, Wii Fit Plus, and NSMB will still be coming out for the Wii in the comparable year. Nintendo had an absolutely monstrous holiday season, so they should be up by at least 10 million by the end of the year, although 12 million seems more realistic.

Next year was a pretty strong year for Nintendo too, about matching the PS4's peak so far. Assuming that last year was not the PS4's peak, which seems reasonably, it may be able to bring the gap down by two or three million. However, this depends on how good the Neo is, and how much of a pricedrop the standard unit gets. It also depends on if Scorpio is able to take some of PS4's thunder, which I think it can if it is more powerful. The NX could also potentially hurt Sony on the more casual end of the fanbase. Of course, the Neo could be amazing and push sales way higher.

At any rate, the PS4 is very unlikely to start catching up significantly until at least 4 years into their lifespans. It should take a year and a half optimistically for the PS4 to actually close the gap. If the PS4's lifespan is as long as the PS3's, then it will probably win in the end. I'm not so sure that will be the case.

This and psv vs wii u are the most interesting comparisons, even though the last one probably has a confirmed winner already

The combined 8th gen sales are well behind the combined 7th gen sales at the same point in time. The 7th console generation has sold over 270 million consoles across the 3 platforms: Nintendo, Sony and Microsoft. The 8th generation will be hard pressed to sell 200 million sales combined.

That's because the Wiiu is doing a lot worse compared to its predecessor... ONE and PS4 are doing beter than expected and are sustaining the current gen.

I think it gets to 200 million. 270 will be a stretch unless the later years for the PS4 are particularly strong and the XBox One does ok.

Great comparison this. I reckon the ps4 wins in the end. Will be fun to keep track of.

I see the gap to start shrinking in the next year or so.

maybe a little bit next year but not anything significant until the year after that. Then like the person on top said it'll take good year and a half from there. It should happen but pretty late.

maybe a little bit next year but not anything significant until the year after that. Then like the person on top said it'll take good year and a half from there. It should happen but pretty late.

I see the gap staying flat through this year, then closing next year. The PS4 will do similar sales in 2016 that the Wii did in 2009.

In 2017, the PS4 will maintain those sales whereas the Wii dropped off. This will close the gap by half.

you mean 2009 not 2008, also the wii's strongest holiday season is actually this upcoming one. It did start slowing down during the summer which we are in now but got it's first price cut before the holiday. Remember 4 million NPD? That was this year.

The gap should definitely grow through the rest of the year. PS4 started off this year with higher sales, but since then, it's been generally the same YOY for 2015 and 16. I don't know whether it's tracking ahead or behind this year, but I'm pretty sure the difference is plus or minus 500,000 or less. VR is too expensive to give a huge boost over the holidays, and the combination of XBox Slim coming out this year, and the NX, Scorpio, and Neo on the horizon may weaken PS4 sales over the holiday. The Wii is trending far behind 2008 because Wii Fit came out in April of that year, so sales spiked in the middle of the year. 2009 has its bigger releases towards the end of the year, and its holiday season actually surpassed 2008 with over 10 million. Considering that the Wii is already ahead this year, and its sales were extremely lobsided towards the end of the year, PS4 would have to have an absolutely massive holiday season to prevent the gap from growing significantly, and I don't see that happening unless VR wildly surpasses my expectations.

Ｗould be great if we add ps2 number too.