For ten years, developer Naughty Dog has been straddling the line between interactive entertainment and motion pictures with the Uncharted franchise. Now the studio is back with Uncharted 4, the fourth and possibly final mainline installment of the series. Like its predecessors, Uncharted 4 deftly merges the narrative demands of cinema with the mechanical mandates of video games. Also like its predecessors, Uncharted 4 struggles in spots, as two disparate media jockey for attention.

The story of Uncharted 4 swings wildly around hero Nathan Drake’s timeline, touching on his time as a child in an orphanage and his misadventures with his older brother, Sam. The majority of the game, however, takes place three years after the events of Uncharted 3. He’s happily married to his sweetheart Elena Fisher and he’s retired from the treasure-hunting game. The predictability of his workaday life is interrupted, though, when his long-lost brother shows up with an offer too good to refuse. 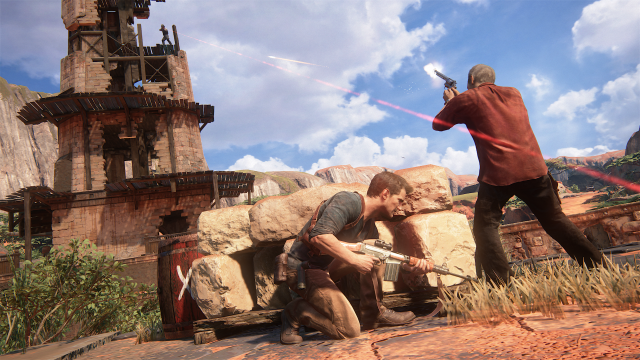 Uncharted 4 is more interested in cinematic storytelling than ever before, and it’s both a boon and a detriment. The voice acting, motion capture, and writing in Uncharted’s many cut-scenes is world class. There are several scenes, including a quiet dinner between Nate and Elena, where it’s easy to forget Uncharted is a game and become lost in the moment. If Naughty Dog ever wanted to open an animation house, it could compete with Disney, Pixar, and DreamWorks – no question.

The catch is that sometimes these cut scenes, phenomenal as they are on their own, are overlong and interrupt the pacing of the game. Adding to that pacing problem are several chapters heavy on exposition or paint-by-number set pieces. Much of the early part of Uncharted 4 is spent moving from point A to point B, pressing a button to trigger a scripted event along the way. There’s nothing wrong with a linear game, but there is something problematic about a game on auto-pilot. 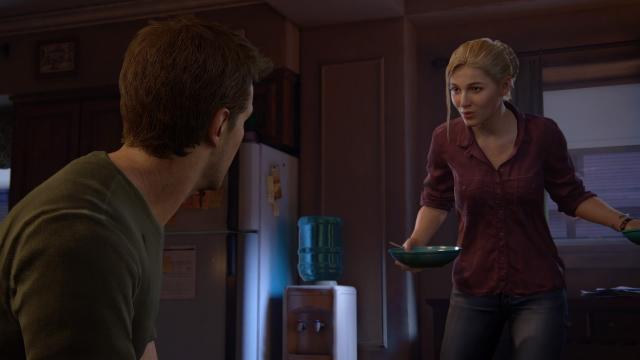 Take chapter 16, for example. This episode adds nothing new from a gameplay perspective. It exists only for narrative purposes. Sure, it fills in some of the gaps in Nate’s backstory, but it’s not particularly challenging or engaging. It’s here and in other chapters where Uncharted 4 veers dangerously into the territory of Quantic Dream.

Mercifully, these chapters are few and far between. The majority of Uncharted 4 embraces the trifecta for which the series is known: combat, platforming, and puzzle-solving. Puzzles in Uncharted 4 aren’t anything special, but they provide a welcome palate cleanser between bouts of exploration and violence. It’s in the areas of platforming and combat that the game makes its most significant strides. 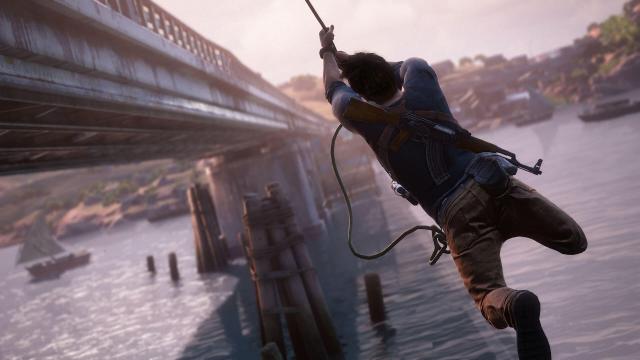 Naughty Dog introduces in Uncharted 4 two original means of traversal, a rope and piton. Inspired, ostensibly, by Crystal Dynamics’ Tomb Raider series (itself recently inspired by Uncharted), these items allow Nate to navigate terrain in new and different ways. Using the rope, he can swing across chasms or dangle beneath ledges. Using the piton, he can create an extra handhold to gain access to out-of-reach ledges.

The issue, as always with the Uncharted series, is that players can use these tools only when Naughty Dog says so. The rope and piton allow new scenarios and more vertical level design, but when players use them, they use them according to a script. The writers and developers at Naughty Dog have proven themselves masters at creating this illusion of choice over the last decade, but, in the end, it’s just that: an illusion. 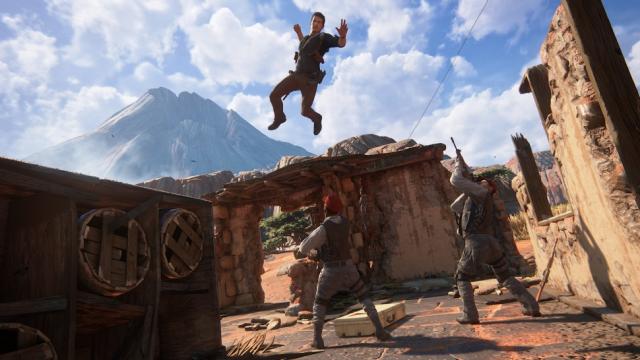 What isn’t an illusion is the game’s combat, which stands as the best in the series. Inspired by its stellar work with The Last of Us, Naughty Dog infused a healthy dose of stealth action into Uncharted’s traditional cover-based shooting. Nate can now hide unseen in tall grass and foliage, and surprise enemy guards with silent take-downs. This adds a new layer to combat, as players can adopt a stealthy approach to combat or a run-and-gun approach, or mix and match the two for maximum effect.

It's here where Uncharted 4 really hits its stride. The series is always best when it embraces tactical, improvisational gunplay, and the addition of stealth and new items like the rope makes battles more interesting and engaging than ever before. In a single battle, Nate could sneak up on a sentry, lob a grenade at a platoon of soldiers, swing across a ravine on his rope, and land on an unsuspecting soldier. When Uncharted trusts its players to make choices for themselves, it's a beautiful thing. 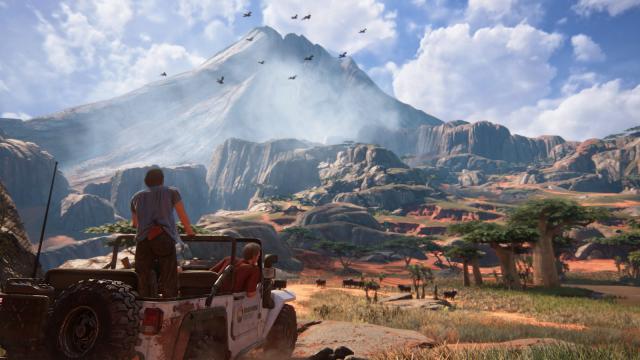 No conversation about Uncharted would be complete without some mention of graphics, as Naughty Dog has been pushing the graphical envelope for ten years, first on PS3 and now on PS4. Uncharted 4 is nothing short of a technical masterpiece. In terms of image quality and character rendering, Uncharted 4 might be the most impressive game on consoles. Lighting, sound design, textures, and draw distances are staggering. Artificial intelligence is much improved also, both for partners and enemies.

Apart from its excellent single-player mode, Uncharted 4 also features a competent multiplayer mode. It pales in comparison to Naughty Dogs' efforts in the campaign, but it's a nice diversion. Players choose their favorite characters from the series and fight to the death in a number of colorful maps. Adding to the fun are "mysticals," supernatural power-ups, and sidekicks (AI-controlled buddies that fight alongside you). 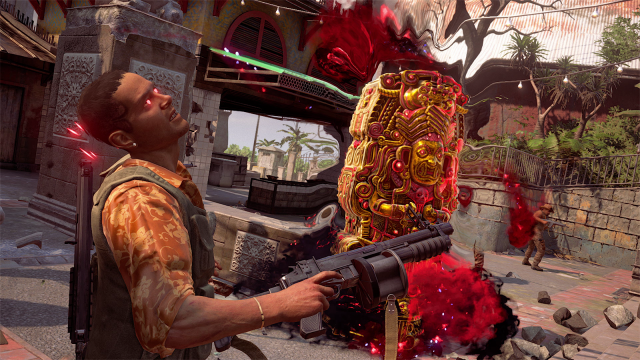 An unexpected and welcome surprise in Uncharted's multiplayer suite is trials mode. This series of challenges is played solo against AI bots. It teaches newcomers the basics of multiplayer and removes the stress of initially playing against veteran players online.

Still, it's the single-player experience that defines Uncharted 4. On that front, Naughty Dog delivers. The studio gets a little too ambitious with cinematic storytelling at times, chipping away at player agency in the process, but it excels when it focuses strictly on gameplay. Uncharted 4 is a roller coaster of a game, one with incredible action set-pieces, tactical gunplay, and emotional moments. It's a triumphant send-off for one of the most beloved series of the last ten years.

This review is based on a retail copy of Uncharted 4: A Thief's End for the PS4

One of gaming's masterpieces. Drake will be missed!

Great review! UC4 is a great game, there are some pacing issues that prevent it from topping UC2 as best in the series but damn has it got some fantastic moments! (I love you chapter 20!)

Best game in the series for me and I'm just on Chapter 10.

I had no problems with the way Uncharted 4 was set up. I love the story and have no problem with the cutscenes. It's not one of those mindless games that people buy just for multiplayer. It takes you on a ride, and i loved every minute of it. Thank you Naughty Dog, for giving us such a great game to send Drake out on.

I have never found Uncharted series to be as great as people said. BUT, this one changed my mind tbh, it's pretty much blow me away. Imho, It's THE BEST UNCHARTED GAME TO DATE!
I love pretty much all of it. The only reason i rated 9.5+/10 and not a 10/10 is because of the ending. While it's beautiful and good, i believe it can done better.

I guess QD deserves some more love after this. And for the record, the cinematic story telling is what makes this game special. Yes, opinions... I'd figure everyone would be familiar with the gameplay by now. Playing this game I had to think of both QD games and FFXIII.(for you know... on rails...) But, kudo's to ND, it was an enjoyable ride.

I'm glad I don't play video games being that picky about chapters which "exist only for narrative purposes" I mean how can this be a negative thing? It's how video games grow their characters and keep the story going nicely.
Also, it's the first time I've read that some cut scenes are too long, Really!?
Any ways I loved the game and it's sad to say good bye to Nathan Drake.

It is my second favorite uncharted game due to pacing issues but the game is long enough to forget it after the first half of the game. Being able to play the game in 8 bits and cell shaded were also a good addition.

Its my favorite Uncharted, way above everything including the second one.

The things listed as weak points are things I like and enjoy in games. I guess I'll have to get that PS4 to play U4 after all.