Fans have come to expect a lot from PlatinumGames, a studio founded by industry giants Shinji Mikami, Atsushi Inaba, and Hideki Kamiya. Lately, however, those expectations have been tempered by some sub-par outings. Platinum's latest, Teenage Mutant Ninja Turtles: Mutants in Manhattan, is another one of those lackluster titles. Mutants is especially frustrating because Platinum already proved it could make a dependable licensed game with Transformers: Devastation. Yet where Devastation was a love letter to fans, Mutants is more like a brick through the window.

Like so many of Platinum's games, Mutants is a hack and slash action game. Each of the four ninja turtle brothers - Leonardo, Donatello, Michelangelo, and Raphael - punch and kick their way through nine levels, each culminating in a boss fight. It seems like the evil brain Krang, now a general, plots to destroy Manhattan and take over the world with his lieutenant Shredder. Platinum developed the story in-house, inventing its own storyline instead of borrowing plotlines from the comics, cartoons, or movies. 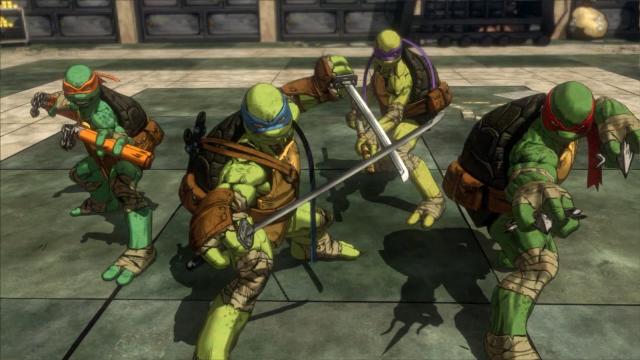 Platinum isn't known for its epic storytelling, so a cheesy world domination storyline doesn't matter as long as the game has strong fundamentals. The problem is, Mutants doesn't. It throws a lot of gameplay hooks and tools at the player, but none of them are developed throughout the campaign. They exist, probably, to cover up the simple and unrewarding fighting mechanics that define the game.

In the Mutants tutorial, you're taught a dodge move and a parry move, tutored on stealth take-downs, and instructed how to scale buildings, grind rails, and glide through the air. Pretty cool stuff, right? Well, don't expect to use these abilities in any meaningful way. Players can survive enemy and boss encounters without dodging or parrying at all. And levels are designed in such a straightforward and clumsy way as to make stealth and verticality virtually meaningless. There's also a pointless scanning device that's basically a glorified waypoint reader. 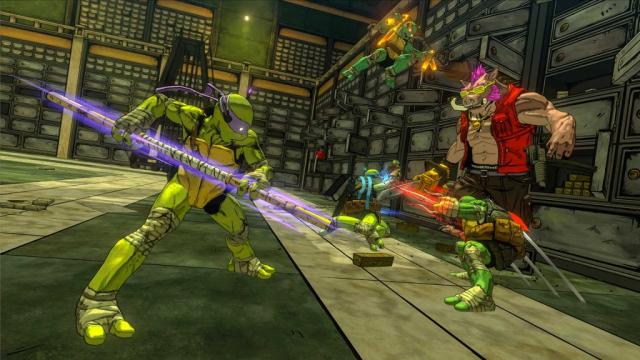 The boring combat and tedious level design in Mutants is mitigated somewhat by the turtles themselves, each of whom fights in a unique way with special power moves. Raphael, for example, is relatively slow-moving but hard-hitting. Donatello, armed with a bo staff, has long range. And Mikey - when he's not inhaling pizza - strikes fast and furiously. Moreover, in battle each turtle can employ four different power moves. Raph can enter stealth mode, for example; Leo can slow time; and Mikey can become a cheerleader - pom-poms and all - in order to recharge his brothers' power moves.

The most impressive of these power moves are the combo attacks, where two turtles team up to knock the stuffing out of anyone nearby. The best occurs whenever Mikey teams up with one of the other turtles. A disco ball drops, Mikey and his partner disco dance, and then so too do the bad guys, opening themselves up to a flurry of attacks. It never gets old. 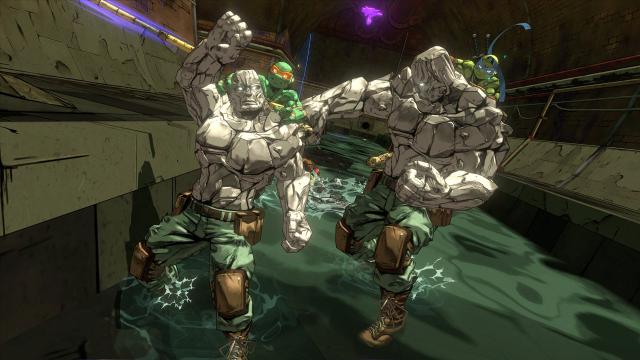 All of these special moves prove particularly important in boss battles, which are the highlight of Mutants. Where the majority of each level is a boring slog that demands players run from point A to point B to defuse a bomb or take out a platoon of enemy soldiers, the end boss fight is a lot of fun. It's here where players actually need to watch enemy patterns and develop a strategy, instead of absentmindedly mashing buttons. The boss fight with Wingnut is unusually good.

The entirety of Mutants can be played solo - with a single player switching among all four turtles - but it's with other players online that the game becomes more enjoyable. Here turtles can adequately complement each other without the need to switch characters on the fly. Unfortunately some technical errors mar the experience on Xbox One. Players are just as likely to connect smoothly with an online lobby as they are to experience time-outs, connection errors, and mid-level disconnections. 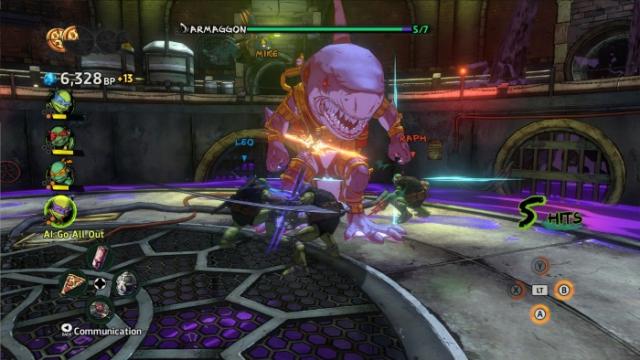 This problem could be diminished with an offline co-op mode, but Platinum inexplicably removed that option from the game. Turtles games have a long and glorious history of couch co-op. That Platinum skipped the mode altogether is inexcusable.

In the end, Platinum didn't need to do much to make Mutants in Manhattan a worthwhile experience. All it had to do was respect the source material, create some satisfying combat mechanics, and honor the series' local multiplayer origins. It failed largely at all three. Hopefully the next licensed game from Platinum - if there is one - will learn from Mutants' mistakes.

This review is based on a retail copy of Teenage Mutant Ninja Turtles: Mutants in Manhattan for the XOne

I must agree with this assessment. I thought this game would be great. Especially if the best hack and slash developer was behind it. It should have been gold from the start. Unfortunately I found the game to be...okay at best. Local multiplayer would have been really good. The ball was dropped here.

Maybe the should just do TMNT: Turtles In Time and just add online/local co op. Not that Ubisoft crap that came out years ago. The original in HD.

I LOVE Turtles in Time. It's kind of distressing that the best Turtles game came out 25 years ago.

Anyone else super bummed this game turned out this way? I know I am. I'm a huge TMNT fan and my 4 year old son even more so. No local co op kills it for us as that's his and my favorite way to play games together. I might have still purchased this game if it had local co op.. my son doesn't really care much about "polished gameplay" "boring combat" or "tedious level design"

I really think Platinum is spread way too thin. Transformers, TMNT, Nier, Scalebound, and Star Fox. That's 5 projects THAT WE KNOW ABOUT. One of them being their biggest project to date, that being Scalebound. I mean, I appreciate that they have found a sustainable niche to work in but they need to focus more.

Couple those cons with the frame cap and I'm pretty much put off from grabbing it, which is a shame because I grew up with TMNT and love P*s work.

The game would have been better if it had 60 fps, non-repetitive levels, and a more complex combat system.

Apparently not spemanig. Even though they stated it was a goal in the first place, it only runs at a rock-hard 30 fps. Absolutely unacceptable. I understand Uncharted 4 being 30 fps on the PS4, but a game that's not that demanding can't even be 60 fps? This game can easily be 60 fps LOCKED. Oh well.

It is. I had some decent expectations for the game. Truly hopes for a good TMNT game

It seems that Platinum's strength is developing a combat system. Their level design and story capabilities are very limited. This has me a bit worried for Nier 2.

I personally enjoyed the game, but some of the side missions were really frustrating especially the "stealth" ones or the disarming bombs one, where infinite enemies are throwing bombs at you. At higher difficulties it shows how unpolished even the boss battles are. As sad as it is this was just a licensed game to coincide with the Bay Turtles.