Wailing Heights is one of the first games I've played that actually shows a good understanding of modern British sub-cultures and utilises them as a central theme. It’s flawed in places, but from start to finish Wailing Heights is so endearing that I was left feeling that this microcosm of Britishness - warts and all - was truly brilliant by the end.

So what is Wailing Heights? It’s a 2.5D adventure game set in a horror town of the same name. You play as Finklestein, a member of an old pop band called the Deadbeats, who attempts to finds his/her (you’re able to choose your gender) way out of a weird town. Early on in the game Finklestein is given a device which allows him to take control of other characters through the simple fact of learning their name, what they hate, and what they love. Singing a song that includes references to these three things allows you to explore the town as this new character and opens up new options. 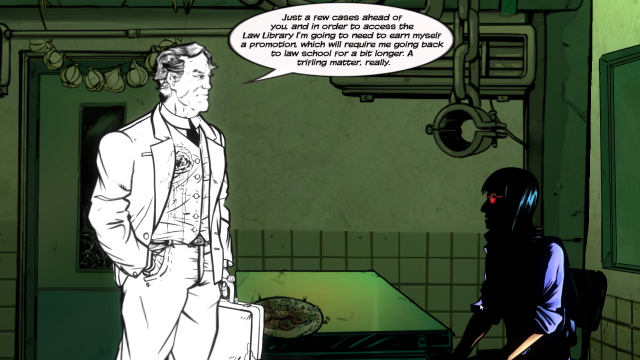 You start off by taking control of a ghostly lawyer, who is aptly called Shoul Goodman (Wailing Heights is full of puns like this), and must try to free Finklestein by finding a law book which contains information on what should be done with regards to humans in Wailing Heights. As is the case with most adventure games, things aren’t as easy as they initially sound, and you end up having to interact with numerous characters across town in order to find out more.

This chapter teaches you the basics perfectly, pushing you to ask as many questions of characters as possible in order to find out who you can control and what abilities they possess which may come in handy. 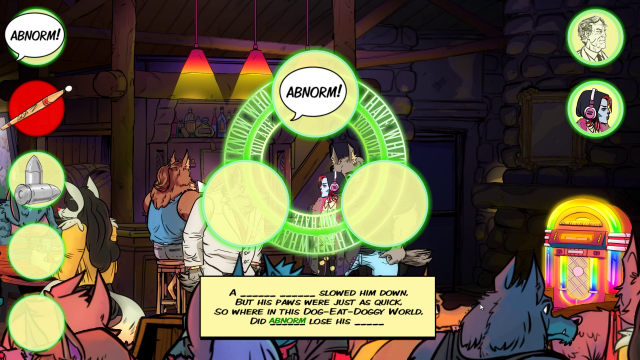 Throughout the course of the game you’ll control four different horror creatures: a ghost, a vampire, a werewolf, and finally a zombie. Each creature has its own ability, which is useful to varying degrees. The zombie, for example, allows you to communicate with other zombies, so their basic groans become actual words, while the vampire is able to reach high places.

Each creature you control also has a nifty back story and a fair amount of personality. Take the werewolf; he has an alpha male personality and, accordingly, is constantly trying to show off to the ladies at the local pub and prove he’s bigger and better than everyone else. This charade comes off as annoying at first, but as you get to know the character more he becomes quite endearing and likable. 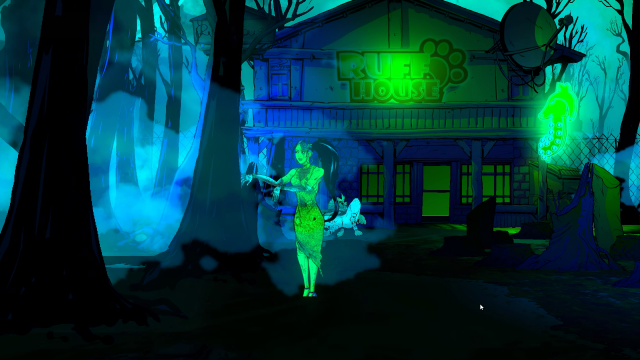 The presentation is stunning. Everything is hand-drawn and as a result each area exudes style. Small, subtle things underpin this sense of style and flesh out the game world, from the AB-negative lattes that are sold to hipster vampires, to the guts and different drinks that are served up at the zombie theatre.

These presentational strengths filter into the sound effects and music. Each character has a genuine, regional British accent, which plays on Wailing Heights' quirkiness, and the soundtrack consists of music produced by local talent exclusively for the game. Each track is catchy and fits perfectly with the environment it’s been created for, helping to make the long trips back and forth between characters and areas enjoyable rather than laborious.

In being an adventure game, Wailing Heights inherits a few flaws from the genre. It took me around 6-7 hours to complete the game, and whilst that sounds great for an indie adventure title, a large chunk of that total playtime was a result of my being stuck in the middle portion. As with most adventure games, you reach a point where you can’t continue unless you use a specific item in a specific place. Wailing Heights is no exception, and as a result I needed to speak to every NPC in the game as each different creature whenever I was stuck. This drove me insane and almost forced me to stop playing, but I'm glad I didn't. 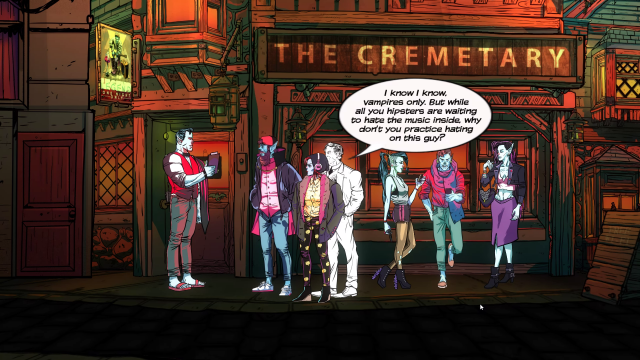 Wailing Heights is also very janky in places, with animations sometimes looking clunky and the sound frequently changing in volume (there were times when I couldn’t hear what a character was saying as they were drowned out by environmental noise). Whilst I'd usually lambast these technical issues, it’s weirdly charming in Wailing Heights, perhaps because of the game's unique vibe.

All in all I’m glad I played through Wailing Heights and kept with it to the end. It’s an eccentric title but its quirks and flaws somehow make it even more charming and quintessentially British. I look forward to what Outsider Games is able to come up with next because Wailing Heights was a uniquely enjoyable experience.

This review is based on a digital copy of Wailing Heights for the PC, provided by the publisher.