Paranautical Activity has a messy history. When it launched on Steam in 2014, it was mistakenly categorized as Early Access. This, along with other perceived indignities, prompted the game's lead developer, Mike Maulbeck, to issue death threats to Steam's CEO Gabe Newell on social media. Soon after that the game was delisted and, amid the controversy, the game's original developer, Code Avarice, sold the intellectual property rights to Digerati. The folks at Digerati re-released the game on Steam in early 2015 and on Vita, WiiU, and Xbox One this year.

Despite the hoopla surrounding the game's release, Paranautical Activity isn't especially controversial. It is, however, unusual in its gameplay. Part twitch shooter, part rogue-like, Paranautical Activity draws inspiration from arena shooters like Doom and Quake and so-called "procedural death labyrinths" like Spelunky and The Binding of Isaac. All levels in the game are randomly generated and death is permanent. 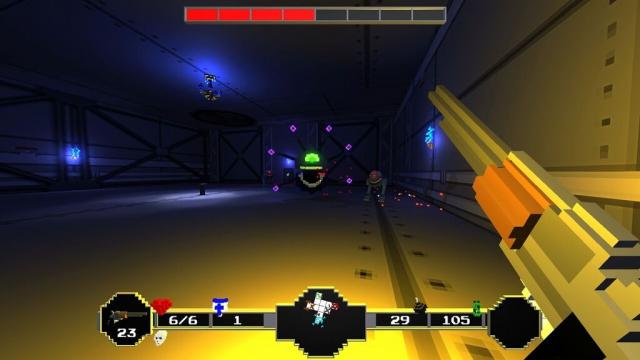 Combining twitch shooting with perma-death and procedural generation is an interesting gameplay concept, and one that has both pros and cons. In the plus column, Paranautical Activity provides the speedy, twitchy shooting that's missing from so many modern shooters. Players have the ability to change the FOV. The HUD is clean and unobtrusive. The guns in game, which range from crossbows to grenade launchers to katanas, are a lot of fun to use. Each of the game's six characters (two are unlocked through achievements) has a starting weapon, but can pick up primary and secondary weapons during a run.

Part of the genius of Paranautical Activity, and of rogue-like games in general, is its unpredictability. Players begin the game in an elevator. It opens on floor one. There are open doors all around. Walk through a door and it closes behind you. Enemies spawn and attack. Which enemies? You won't know until you're in the room. Which room? It changes every time. 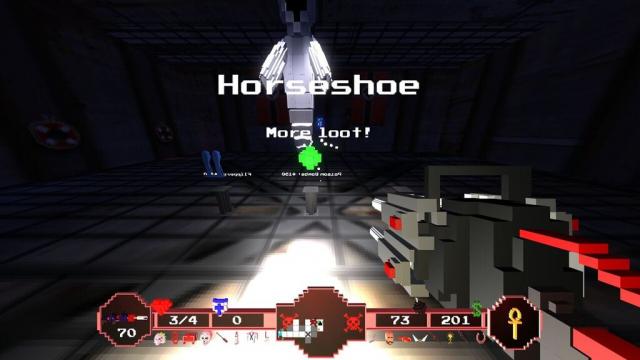 Adding to the uncertainty are boss rooms and item shops. On each floor there is a mini-boss and a main boss. Beat the mini-boss to earn a powerful item, and beat the main boss to access the elevator and climb one flight. In the meantime, players can spend money dropped from monsters on power-ups in item shops. It's a risky gamble, though, as the functionality of each item is something of a mystery.

In the end, however, that's part of the sadistic charm of Paranautical Activity. You need to try, try, and try again to make any sort of progress. You need to experiment with weapons and power-ups, and decide when it's more prudent to skip a mini-boss room altogether. There are only eight floors in the game, but it will take hours of experimentation to reach them all. 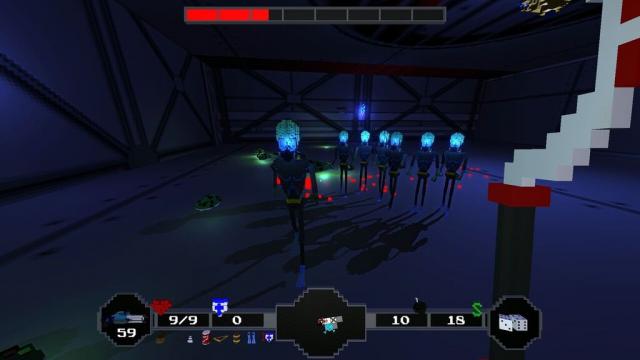 The final item in the pro column is the game's graphics. Digerati, and Code Avarice before it, adopted retro-looking voxel graphics for the game. These graphics, which bring to mind Minecraft, give Paranautical Activity a signature look: clean, crisp, and blocky.

Now, to the minus column. Many of the game's enemies and bosses are underwhelming. Some, like a flying turtle with rocket launchers attached to its shell is, of course, awesome. One boss, who wears a protective shield until his skeleton minions are dispatched, is particularly creative. But a lot of them just spam attacks or rush at you. Fights with these bosses degenerate quickly into circle strafe, fire, rinse and repeat. 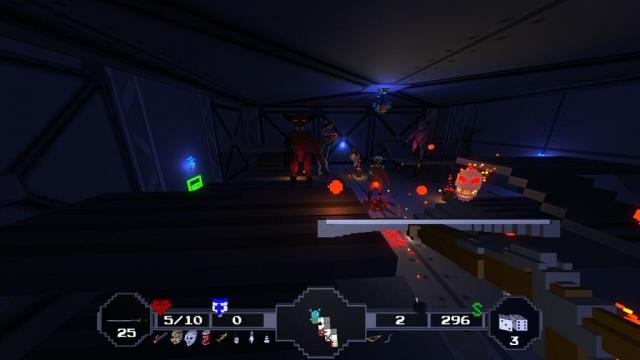 Another flaw is the music. It's bad. It's all dubstep all the time. Turning the music off completely and popping in your favorite soundtrack might be the best answer here.

Finally, and most frustratingly, the game is punishing. Random item drops, random enemy encounters, and randomly generated maps make survival in Paranautical Activity a Herculean task. If you possess the skill and good fortune to reach higher levels, you're still in danger of facing death and destruction whenever you enter a bullet-hell room. A few enemy hits is all it takes. Then it's back to square (or floor) one. This is, of course, the raison d'être of rogue-like games, but Paranautical Activity is less forgiving than most. 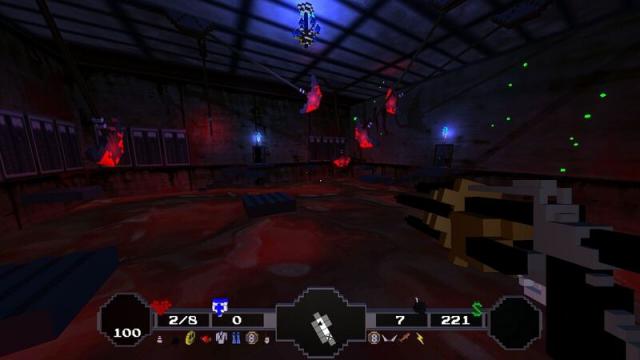 It's a testament to the solid shooting mechanics and progression in the game that the extreme level of difficulty isn't a total turnoff. You'll die - a lot - but you might just find yourself going back for more. Paranautical Activity will make you a glutton for punishment.

Final verdict? Paranautical Activity is a mixed bag designed for a niche audience. If you like twitch shooters, permadeath, and high difficult levels, this is a game that's worth considering. If you're a shooting fan who wants more structure and predictability, Paranautical Activity is probably a skip. Mastering this game will provide a great deal of joy and a powerful sense of accomplishment, but many players will give up long before achieving that goal.

This review is based on a digital copy of Paranautical Activity for the XOne, provided by the publisher.

It definitely looks fun! Hope to pick it up sometime.

I still need to buy the Wii U version.

So I can never get an idea if a game is good from these reviews where the game is iffy.