There is a clear hierarchy among Nintendo's video game franchises. Some properties, like Super Mario, The Legend of Zelda, and Mario Kart, sit at the head of the table. Others, like F-Zero and Star Fox, sit at the kid table (Wave Race has to eat on the porch). Discounting the 3D remake of Star Fox 64, it's now been a decade since the last Star Fox game and 11 years since the last console iteration.

So, when news broke of a new installment for Wii U, fans, understandably, rejoiced. That excitement turned to trepidation when Star Fox Zero's unusual control scheme was unveiled. Requiring players to control their vehicle in third-person on the TV and first-person on the GamePad, the control scheme's reveal was met with confusion and even anger. Well, there's good news: the control system works. What's more, it offers new gameplay possibilities and enhanced immersion. 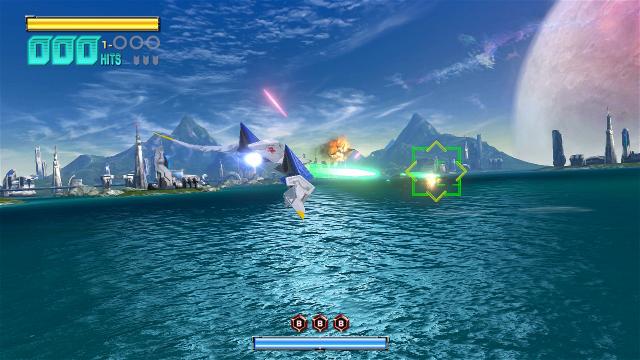 Now that everyone's dropped the pitchforks and ditched the anxiety medication, let's dive into Star Fox Zero properly. Although it bears the name Zero, the new Star Fox isn't a prequel. In fact, it's not even a sequel. It's more of a re-imagining of Star Fox 64, which was a re-imagining of Star Fox. Once again, the mercenary team Star Fox is called on to save the Lylat solar system from the mad scientist Andross. The team includes leader Fox McCloud, ace mechanic Slippy toad, hotshot flyboy Falco Lombardi, and father figure Peppy Hare.

The story is rather light, although some great voice acting (voice actors from the N64 classic return) and a few cameos enhance the proceedings. But Star Fox isn't about story, it's about arcade action. And on that front, Star Fox Zero delivers. 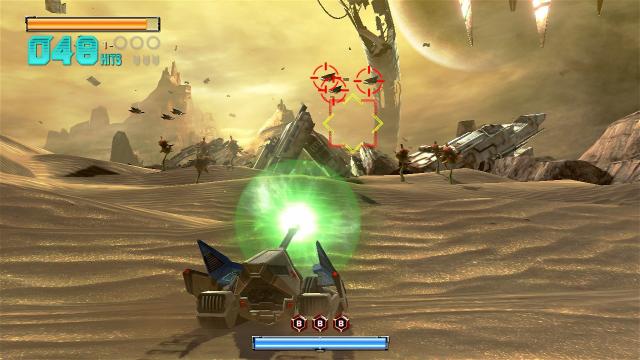 As in the first two games of the series, players control Fox in his signature snub fighter, the Arwing, as he hops from planet to planet hoping to destroy Andross' invading army. Each level in the game takes place on the surface of a planet or in deep space. Some are on-rails, others offer 360 degree freedom of movement. Yet it's not as simple as a straight shot from the first planet to the last. Depending on your actions in a given level, you might be re-directed to a new planet or sector.

Because of that, replaying missions is a must. There are lots of hidden paths to discover, lots of medals to earn, and lots of high scores to beat. The main game can be completed in 100-150 minutes, not unlike older Star Fox titles, but the replay ceiling is huge. Unfortunately, one area that could have boosted Zero's replay value even higher - multiplayer - is missing. Considering GamePad streaming, full-blooded local multiplayer was probably out of the question, but online multiplayer would have been a treat, particularly given the versatility of the game's dual perspective. 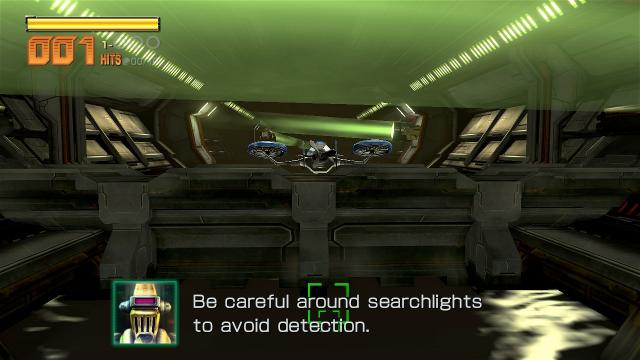 Supporting Fox in his mission are four vehicles: the Arwing, the Landmaster tank, the Walker, and Gyrowing. The Walker, first introduced in the unreleased Star Fox 2, looks like the love child of a velociraptor and an AT-ST. It's the alternate, land-based form of the Arwing, and it allows Fox to crawl into tight spaces and pivot quickly. The Gyrowing, which is new to the series, is a slow-flying hovercraft that deploys a tethered robot called Direct-i. Players can deploy Direct-i to gather medals, unlock doors, and, in general, be super adorable.

All these different vehicles and transformations add a lot of depth to the traditional Star Fox formula. There's something immensely satisfying about strafing a battleship with an Arwing, transforming in mid-air into a Walker and landing on the hull, infiltrating and shooting its core, and then transforming back into an Arwing and outrunning the explosion. Heck, there's even a stealth mission based around the Gyrowing. 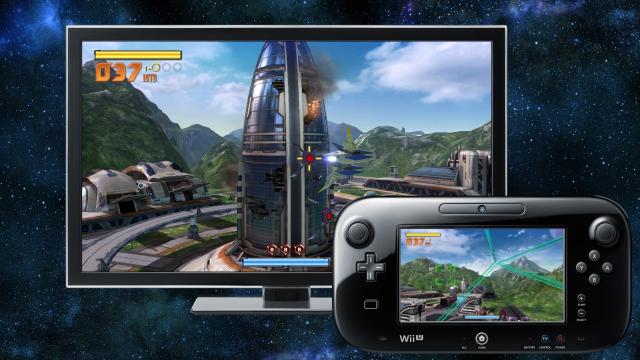 But let's return to the aforementioned controversial control scheme. Players are required to move their Arwing, Landmaster, etc., with the left stick on the GamePad. The right stick controls thrust and brake. Precision aiming, however, is done via motion control on the GamePad screen. So players need to look at both screens throughout each level in order to emerge victorious.

On paper it sounds like a headache, or a solution to a problem that doesn't exist. In practice it gives players greater control of the battlefield and drops them into the cockpit like never before. No longer does the direction of the vehicle determine the firing angle. Players can dive beneath an enemy destroyer to nab a power-up, then angle the GamePad upward and unload into the destroyer from below. If the aiming reticule goes off center during a hectic firefight, you can press Y to center, similar to Splatoon. 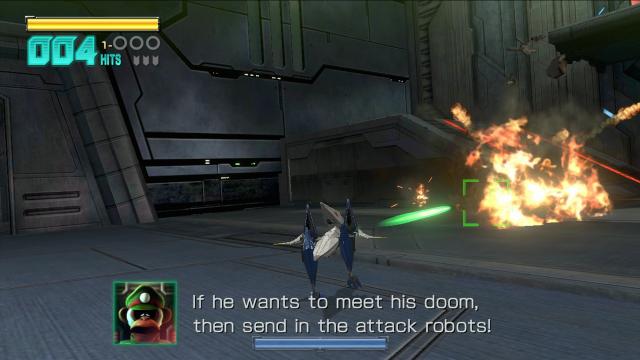 If managing both perspectives and screens still proves to be daunting, Nintendo and Platinum, which co-developed the title, included a neat local co-op mode that allows one player to manoeuver a vehicle with a Pro Controller and another player to aim and shoot with the GamePad.

However, this is not the ideal way to play. Why? Because motion controls and GamePad viewing don't just heighten the intensity and deepen the gameplay of Star Fox Zero. They strengthen the connection between the player and the cockpit. Staring out into the blackness of space or looking down on tanks running roughshod over the terrain below, one feels more like a pilot than ever before in the series. Adding to that sense of immersion is the game's audio, which uses 3D sound technology to great effect. Voices are heard through the GamePad and they seem to be all around you as you play. 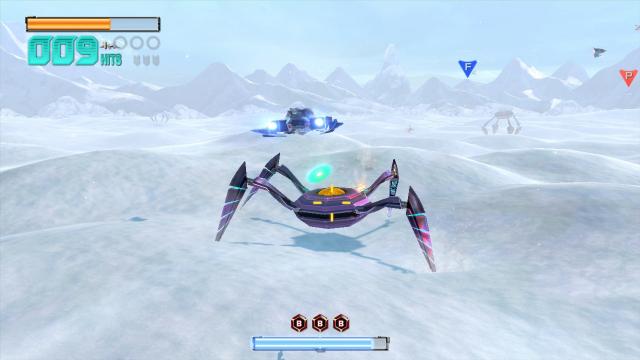 Detracting from that immersive state are the game's graphics, which, put plainly, are crummy. Geometric designs are simple, textures look two generations old, and there doesn't seem to be any anti-aliasing at all. Now, Star Fox Zero makes up for its lackluster graphics by streaming two separate viewpoints simultaneously, delivering (mostly) 60fps gameplay on both TV screen and GamePad. Still, in no way is Zero easy on the eyes. So if you're a player who values glossy graphics, high resolution, and anti-aliasing, Star Fox Zero is probably not the game for you.

On the other hand, if you value smooth gameplay, replay value, and the thrill of aerial dogfights, this game was made with you in mind. In every way it's the faithful successor to Star Fox 64 fans have been anticipating for almost 20 years.

This review is based on a retail copy of Star Fox Zero for the WiiU, provided by the publisher.

"In every way it's the faithful successor to Star Fox 64" Including the graphics it seems, lol. But seriously, sounds like it's a bit of short fun. If people say that 10 hours is the minimum for a SP only game. Does that mean there is 5-6 full plays through worth of game in SFZ?

This game is a 6.5. Any review saying it is not is just too nice.

If I see one more person say these graphics are TWO gens old, I'm going to throw a kitten in a woodchipper. Seriously, go back and actually play a sixth gen game. I have recently and while some have aged fairly well, Star Fox zero is clearly, obviously, and inarguably better. I frankly don't care what else you say about the game, but the whole graphics amnesia phenomenon that seems to run rampant in this age of polarized extreme opinions is really starting to annoy.

Thanks for your comment! To be fair, I wrote that the textures look two generations old, and I stick by that. The overall package looks better than sixth-generation games, but the textures are particularly bad. They're muddy and flat. Fortunately, resolution and textures mean little to me, so I had a blast with the game. I hope you like it too!

Sorry if that came off a bit course :P . I'm not saying it isn't a mixed bag, but some of the textures do look pretty crisp and clean. It's overall package is something like a 2007 to 2008 7th gen game, the early HD period. It's just I get very tired of so many people around the internet saying stupid things like Star Fox Zero looks worse than a GameCube game or Xenoblade Chronicle's D's characters look like early PS2 models, or Super Mario 3D World looks like a Dreamcast game with good lighting (no seriously, someone said that on this very site). It's mind numbing that some people have such short memories.

Ah, fair enough. I can see how that would be frustrating. I definitely remember those silly Xenoblade/PS2 comparisons. Unfortunately in this age of the Internet, moderation doesn't sell. Things are either the absolute worst or the absolute best, and graphics are either photorealistic or cause eye cancer. Anyway, I appreciate your passion on the subject. I hope you'll continue to comment :)

We DO tend to forget how far graphics have advanced. I recently played a few of my favourite N64 games and I was stunned by horrible the graphics were. In my memory, they were much better.

These graphics are TWO gens old.

Great job on this review ....seriously

Just ordered this game. Motion controls aren't my favorite, but I'm looking forward to the challenge they provide in this game and the graphics look fine for my taste. Well-done and thoughtful review! Enjoyed reading it. :-)

I like the concept, some kind of modernized retro space shooter with immersive controls, even the simple graphics style fits in

still, no online multiplayer is a huge minus :/

THIS is a PROPER review.

"if you value smooth gameplay, replay value, and the thrill of aerial dogfights, this game was made with you in mind"
Definetely my kind of game