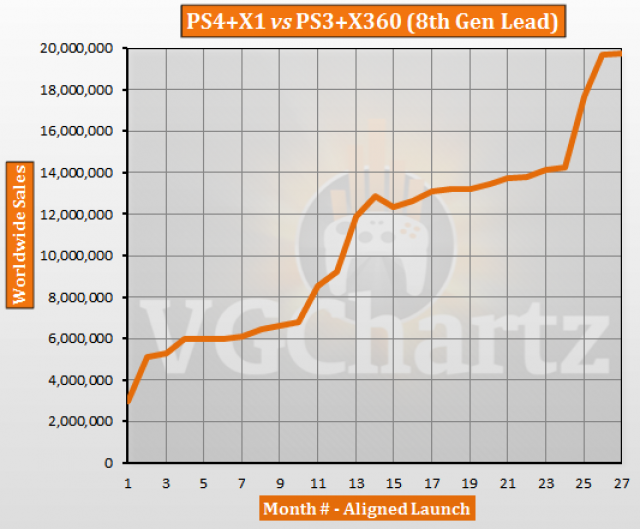 True, but IMO we will see a far bigger drop when Kinect will hit. And then we will have to count the drop of the Wii and uptake of the PS360. Never the less, at that point there will be a ~25 million lead by this gen, one that will probably end ~2 years earlier then last gen.

Even so, Im expecting that drop to be mostly from the Xone rather then the PS4. Both have time for one major redesign that will blow up sales, and lets not forget a standardized sub 300$ price.

Add in the wildcards that are VR and still unknown games, and we have one great generation to look forward to ;-)

This is undoubtly because Nintendo lost the grasp on the casuals on the Wii. They have naturally drifted back to the playstation (after leaving the PS2). Everything worked out in Sony's favor this gen.

PS4 is a freaking beast, it makes sure this line only goes one way, that being up except for the 14th month

Not so sure about this. In 2015 PS4 and Xbox ONE had to beat 18 Millions PS3 and Xbox 360 combined sales; this year they'll have to beat 24 millions. While I'm sure PS4 will be up YoY, 6 millions might be too much to keep constantly rising up. While PS4+Xbox ONE will sell more than PS3+Xbox 360 in this timeframe for sure, I think there will be some small dips along the way

lol ps4 almost beating them on its own. It will loose at the end but still insane

The PS4 and Xbox One are really something this gen! Amazing numbers while the PS4 is just just a beat!...