Sony’s E3 conference last year showed off big name titles like The Last Guardian and Final Fantasy VII Remake, but the game that truly caught my attention was unlike either of those two. It didn't include weapons, nor were there signs of fantasy or RPG elements. Instead it embraced the natural beauty of mid-west America, and gave it a stunning visual style to emphasize the sights you can expect to see if you ever visit some of the region's national parks. That game was Firewatch and it doesn’t disappoint. 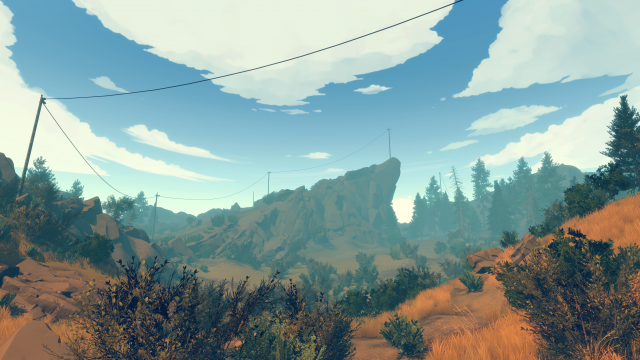 Firewatch follows Henry, a middle-aged Coloradoan who has signed up to work the summer as a fire lookout for one of the more remote areas in the Shoshone National Forest. Due to how isolated the location is his only human interaction is with his boss Delilah through his radio. The game follows their ever changing relationship as weird occurrences begin to happen around Henry and his lookout tower.

There is very much a constant theme surrounding Firewatch and the characters in the game - that of running away. Whether it be from reality, from facing the truth, or from acknowledging the consequences of your actions. It's a fitting theme, doubly so considering that many of us use video games as an escape from reality. So while you may briefly escape your own reality by playing Firewatch, you can also choose for Henry to either face the reality of his situation, or to continue to ignore it. 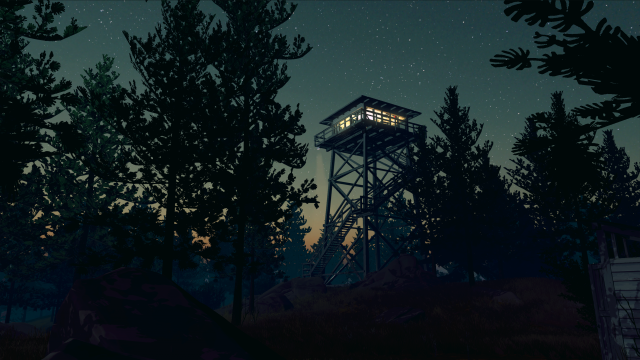 The story in many ways is just a vehicle for the most important and interesting gameplay aspect of Firewatch - the dialogue system. This system, as in titles like Mass Effect, allows you to choose from two or three options when conversing with Delilah. Each choice will change both your current relationship as well as potential future lines of dialog and dialog choices.

A simple prior choice can come back up in future conservations. So for example during one of my first conversations with Delilah I asked if I should beat up some teenagers who were lighting fireworks. She did not agree. About thirty minutes later, in a different area of the game, I found some beer cans that the teens had left; Delilah then referenced the previous conversation and gave me the go ahead to beat them up. In short, Firewatch’s dialogue system will often build on your choices, allowing for ‘personalized’ conversations to occur that are relevant to your own approach to the game.

But of course if these conversations were poorly written or acted then that would all be for naught. Fortunately, Firewatch’s developer Campo Santo did an excellent job on the script and in hiring the right talent to give life to Henry and Delilah. The random banter the two have throughout the game is extremely enjoyable, whether it be about naming a turtle or Henry groaning in mental anguish at Delilah’s stream of lightning puns. Players will likely go around the map reporting every single radio-able aspect to Delilah in hopes of starting up another conversation between the two. 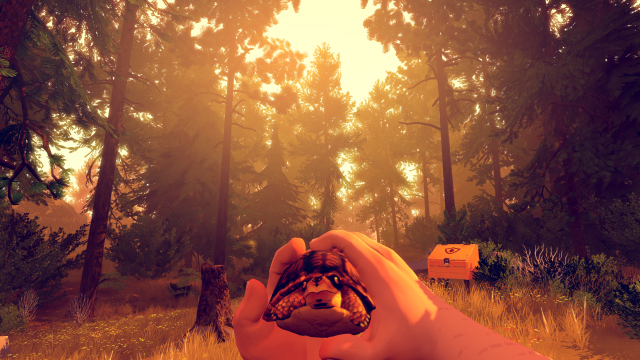 Outside of conversing with Delilah, the majority of Firewatch’s gameplay consists of simply traversing the world to get to your destination. The game does include the ability to run, and allows for short cuts using an item you obtain later in the game, and you can also climb up parts of the terrain, all of which makes exploring the world a generally enjoyable endeavour.

You will however need to get used to the concept of using your map and compass to navigate the rugged Wyoming wilderness. Items found in Henry’s tower and in cache boxes can also be picked up and used to observe your surroundings but these feel largely superfluous and non-essential.

What likely drew most peoples' attention to Firewatch is its beautiful and very colourful art style. The game looks visually stunning thanks to the use of warm colors and art-like backdrops. It all comes together to make a stunning game world and oftentimes I would rest the controller for a few seconds just to take in the visual prowess of the game. 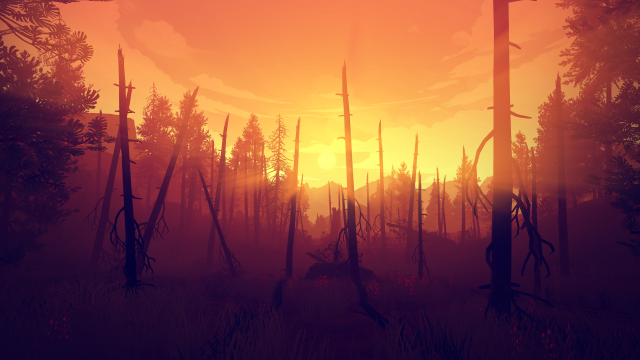 While I can’t praise the game’s visuals enough, sadly Firewatch does have some performance issues that plague it. Throughout my two playthroughs of the game there were dozens of instances where the framerate completely plunged. These dips would last a few seconds and were quite random.

Another key performance issue is lengthy loading times. The world of Firewatch is completely open and all of the loading is done in between in-game days. This means that the loading times are quite long, with some lasting about a minute. This wouldn’t be that big a deal if it wasn’t also for the fact that the game will often freeze while trying to load, forcing you to close the application and restart. 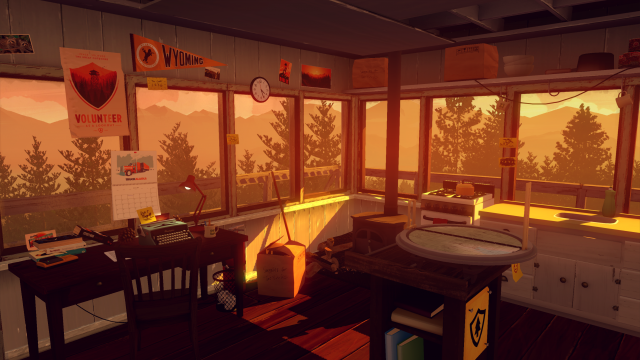 Firewatch is priced at $20 ($18 for those that pre-order) and takes between four and seven hours to complete. The total length of time you spend in the game will largely depend on how much you explore the game world for secrets, how often you call Delilah, and how many times you get distracted by the beauty of the game. Sadly it’s not really very repayable; while you can explore the different dialogue trees in a second playthrough, the overarching story does not change.

Firewatch is a simply gorgeous game that is less about telling an explosive story and more about the little moments that make up the journey. While the game’s performance flaws do damper the overall experience, they are not game breaking, and players who enjoy oddly entertaining character interactions and beautiful game worlds will be smitten with Firewatch.

This review is based on a digital copy of Firewatch for the PS4, provided by the publisher.

This looks great can't wait to play it. I hope the story is good.

Are the framerate issues also pressent on the PC version?

So far on checking up, most reviews aren't pointing out any technical difficulties along with some early benchmark vids on YT.

Who knew the ability to run in a game would be a plus? I guess this game is somewhat of a walking simulator and perhaps some walking simulators don't let you run, which could make for a more tedious than necessary experience. Sounds like a pretty decent game, I'm always put off by first person perspective so more than likely I'll only get this if it comes to PS+. Also congratulations, I rarely read through an entire review, but I read all of this one.

I wonder why it has loading issues and FPS drops, it's a very simplistic looking title from a visual standpoint. Though reviews are good and its £13 over on Steam, I never really expected a lot of replayability but I think it's a good price to go for.

Look forward to playing this on PS Plus!

This is another example of the type of game I see benefiting from VR. These games about exploring, examining, and interacting with other characters seem the right choice for early VR experimentation to me.