Grow Home is a game of moments. There are moments of elation, of discovery, of vertigo, and even some that take your breath away. But there are also moments of frustration and tedium. The result is a title filled with highs and lows, which is fitting for a game about an ascent up a giant beanstalk.

The story in Grow Home is simple. A robot named B.U.D. (Botanical Utility Droid) is dropped off on an alien planet and tasked with climbing a "Star Plant" in order to harvest its seeds. By sending off Star Plant branches into floating "Energy Rocks", B.U.D. can grow the plant into the stratosphere. The goal of the game is to grow the Star Plant to 2,000 meters and then transfer the seeds to the mother ship. 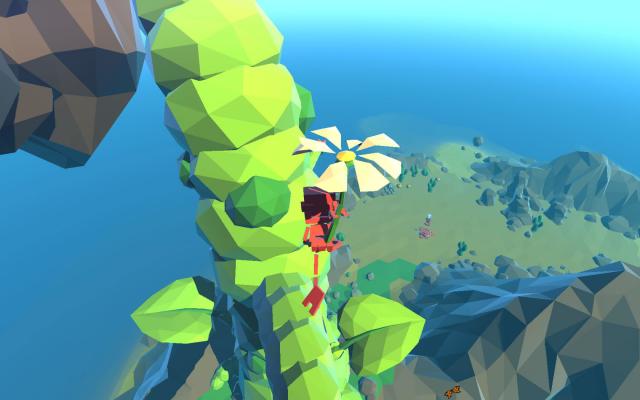 Grow Home began as an experimental procedural animation project at Ubisoft Reflections. It was such a hit among developers that Ubisoft decided to release it to the public, and while Grow Home is no simple tech demo, its experimental origins shine through. The gameplay isn't especially deep or varied, controls are slippery, and technical problems - including screen tearing and a fussy camera - pop up from time to time.

Despite those issues, Grow Home has some major strong points going for it. First among them is its open world. While relatively small, the world in Grow Home is packed with things to see and hidden places to explore, and offers many ways to reach them. As the Star Plant grows higher it will collide with larger floating islands, most of which boast secret caves, grottoes, and, importantly, power-up crystals. By collecting these crystals, B.U.D. can upgrade his gear, including a jet pack that proves essential in the later stages of the game. 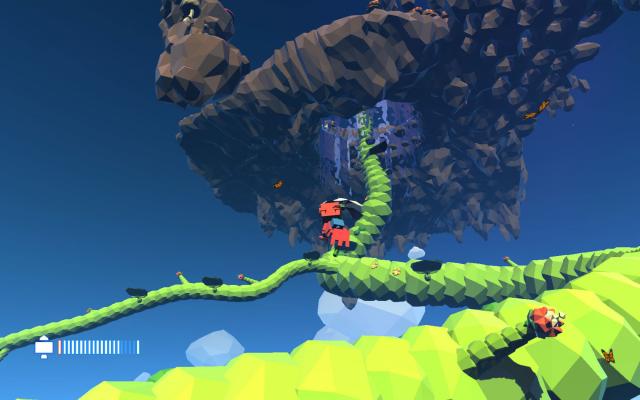 Then there are the game's climbing mechanics, which are mercifully simple and straightforward. Using a button for each hand, players can move B.U.D. across any solid surface. He can climb the bean stalk, hang from beneath a floating island to snatch a crystal, or perform any number of death-defying moves. The system isn't perfect - thanks to the aforementioned fussy camera - but overall it works.

What don't work so well are B.U.D.'s other movements, which can be slippery and imprecise. B.U.D. usually stumbles around like a drunken sailor, surely a result of the game's procedural animation. Controlling Star Plant branches, or "Star Shoots", is similarly unwieldy. Riding a Star Shoot from the main stalk to an Energy Rock is like trying to steer an angry bull into a practice pen. 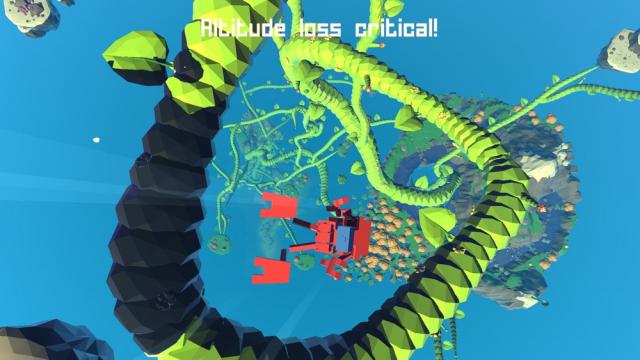 The greatest drawback of Grow Home, though, is the repetitive nature of its gameplay. B.U.D. must climb the bean stalk, find a Star Shoot, and anchor it to an Energy Rock. Then he must repeat the process again and again until the plant hits 2,000 meters. As the plant grows higher, the energy rocks are spaced farther apart, meaning B.U.D. must extend a Star Shoot as far as possible, climb half-way down, and then extend another shoot to reach the rock. If B.U.D. happens to fall, he must climb back up, although a handful of teleportation pads help mitigate that problem.

In the end, in spite of some control and gameplay issues, it's easy to see why Ubisoft developers fell under the spell of Grow Home. The alien world is verdant and alive, the sense of progress and discovery intoxicating, and the hero B.U.D. truly lovable.

I've played through it and find it quite charming. I did have a feeling that it was some sort of internal Ubi tech demo, though I thought it was for separate hand climbing, instead of, apparently, procedural animation.

I've watched this game in action, although I haven't taken the controls myself. The alien world and background music is mesmeric, and the little noises BUD makes are endearing. As you progress, you even get to see the curvature of the planet, there's a real sense of high altitude, there.

There have been a lot of years of great smaller/indie games, but right now seems to be a phase of games that look really awesome, then end up being pretty okay and decently charming, but largely flawed. Hoping we get a few really great ones soon.

It sounds like you had pretty much the same experience as me. As beautiful as the world was, all that climbing was awful. I don't know if you really tried climbing in any of the caves, but the camera could also really go to hell. I also found the fact that the game was incredibly short was kind of a let down. Barely 2.5 hours, and look at that, credits. 2.5 hours of climbing, riding bits of plant, rinse and repeat. Crystal hunting was a nice diversion and a good excuse to explore, and I guess those that really want to know about the planet could scan plants and animals, but I couldn't be bothered to collect more than the 75 crystals I found, much less run around dragging things to the handful of teleports.

Yeah, the camera can be terrible. If you're in a cave it's like it doesn't know where to go and pops in and out of the cave, often zooming out WAY too much.

i agree with bad ps+ games like grow home

Sony's really phoning it in with the PS+ offers nowadays. Call it genius marketing on their end for locking online play under the pay wall and now releasing crap indies and PABS (Pixel Art Bullsh!t) free every month. Mobile gaming has now become far superior to what PSN has to offer. What a shame!