Ever since Lego Batman 2, the Lego series by Traveller's Tales has undergone a metamorphosis. What was once simply a series of arcade beat-em-up levels is now connected by a large open-world hub. In Lego Batman it was Gotham City. In Lego Marvel Superheroes it was New York. In Lego The Hobbit it was Middle-Earth. The introduction of the open world introduced new gameplay avenues to the somewhat stale series. It was a smart design decision that paid dividends.

In Lego Jurassic World, the latest in the Lego video game franchise, the open world is actually divided between two islands - Isla Nublar and Isla Sorna - where the four Jurassic movies take place. Moreover, each island is further sub-divided according to each movie. The result is an awkward open world set-up that pales in comparison to those in preceding Lego games. That fact, combined with some unoriginal gameplay and uncreative level design, makes Lego Jurassic World one of the weakest entries of the last few years. 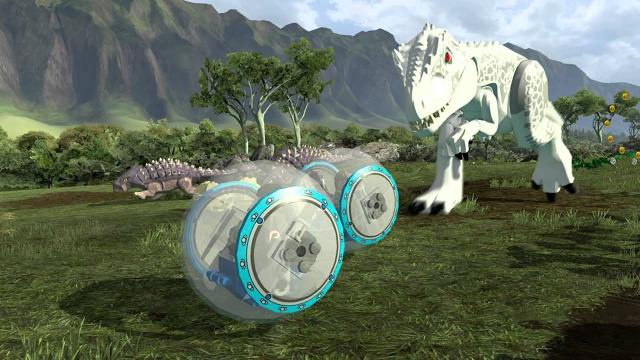 Lego Jurassic World, despite its name, focuses on all four Jurassic movies: Jurassic Park, The Lost World, Jurassic Park III, and 2015's Jurassic World. Each movie gets five levels, for a total of 20. Many of the audio clips and much of the music is taken directly from the movies. The result is one of the best-sounding Lego games in recent memory. The story of Lego Jurassic World stays true, for the most part, to the stories in the movies, embellishing at times in order to create more interesting gameplay scenarios. The search for Eric Kirby's parasail from Jurassic World III, for example, is stretched out into an entire level.

Embellishing original content is a Traveller's Tales staple, and in Lego Jurassic World it pays off, especially in the Jurassic World levels. Two levels in particular stand out: one in which players control Velociraptors and another in which they zoom around a jungle in a gyrosphere. These stages point to the strength of the game, vehicles, and dinosaurs. Players can unlock 20 dinosaurs, including raptors, a T-Rex, and a Triceratops, along with dozens of vehicles from the movies. Playing as dinosaurs is the highlight of Lego Jurassic World, as their move sets are radically different from human characters. 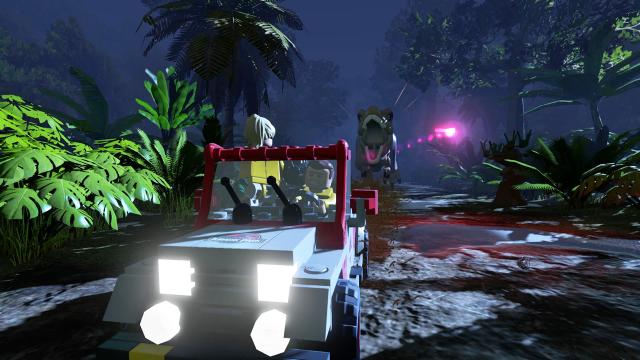 Vehicle levels are similarly enjoyable. While they all follow a similar formula - drive away from the rampaging dinosaurs while firing at them - they're undeniably fun. Shooting flares at a T-Rex while going 40 mph down a muddy road never gets old.

What does get old, unfortunately, are the majority of missions in the game. The mechanics of each level have been recycled from previous games in the series. There are no surprises; no moments of true discovery. Breaking Lego bricks and fighting off bad guys has never felt so unrewarding. It's almost a chore. Dinosaur missions and vehicle challenges provide moments of excitement, yes, but they're few and far between. 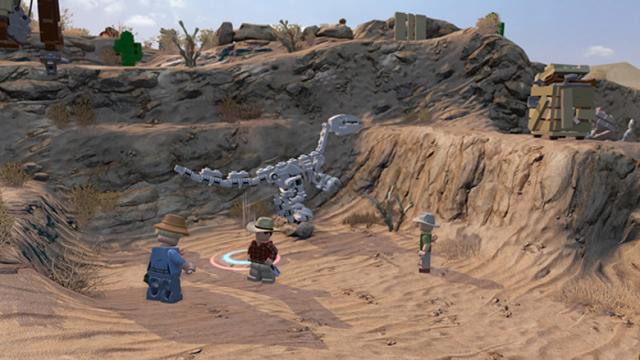 What could have been a relief from the monotony of the game's missions is its open world, but, alas, the open world structure in Lego Jurassic World is disjointed and awkward. In Lego games like Marvel Super Heroes and The Hobbit there was true 360 degree freedom of movement. In Jurassic World, conversely, the open world is more often than not a linear path from level to level. The environments are large, no doubt, and there are some open space areas, but in general the game feels far more restrictive than previous entries.

With an awkward open world layout and unoriginal content, Lego Jurassic World is difficult to recommend. While the game has a good sense of humor and plays well cooperatively (especially on Wii U where the GamePad functions as a second screen), it doesn't introduce many new ideas or memorable set pieces. After the Lego series reached new heights with Marvel Super Heroes and The Hobbit, Jurassic World feels like a step backward.

Lego City Undercover is still the king of Lego games. It will be a long time before that's topped.

I love this game for what it is. Good review, much appreciated

Good review. It may not do much to improve upon previous Lego games, but I think the source material kind of makes up for that. Dinosaurs FTW! :)

That's a shame. Enjoyed the movie and wondered if this game was any good. Haven't been hearing great things, so I think I'll stay away.

This game just felt like a hard chore to me.

Totally agree. Regardless if it's top notch quality, he said a lot of good things about it, also.. and the Dinosaurs are really the selling point for me.