Nom Nom Galaxy is a game about making soup. No, it's not the latest installment in the Cooking Momma series, rather it's a Terraria-styled 2D game about exploring terrain, building a soup factory, filling it with the best ingredients you can find, and shipping your newly-made soup into space. Digging through terrain is made quick and easy with the use of a giant sci-fi buzzsaw, which is good because you want to spend as little time as possible simply digging. Once you've made a nice little plot you can start building your factory and shipping out your delicious soup.

One of the most enjoyable aspects of designing your factory is attempting to make it as automated as possible. Progressing through the game's campaign unlocks new functions and parts for your soup factories, foremost of these being the addition of new robot workers. Building a fully automated factory that only requires you to bring ingredients before it handles everything else is the key to success. Certain levels will give you a partially set-up factory, and trying to figure out how to best automate what you've already been given is a fun strategic challenge. Vehicles are also available to make your outings more efficient, but I never found any of them as useful as a well designed factory.

The focus on design and efficiency is due to Nom Nom Galaxy having a defined and looming goal for each stage: corner the soup market for that specific territory. This requires that you maintain a steady stream of soup rockets heading to customers, which in itself can be quite the challenge. Each shipment of soup will get you a percentage of the market, but an unseen rival is also sending soup at the same time and each shipment he or she makes will be to the detriment of your own market share.

Mass shipments of soup won't always win you the day, since changing tastes can decrease your market share gains down to a negligible amount, but one of Nom Nom Galaxy's biggest issues is that mass shipments all too often do work. This is countered somewhat by the 14 hour campaign's progress being locked behind the number of different recipes you have discovered, so you can't get through the entire game without experimentation, but it would have been nice if the market fluctuations had been more meaningful. If that had been the case then shipping thirty of the same soup wouldn't be a viable way to win most stages.

Galactic soup manufacturing is a dog eat dog business and if you start to take the lead in a given level you can expect some harsh resistance in the form of swarms of enemies. Automated defenses are available but there's nothing quite like picking up your own shotgun or battery powered sword and getting into the fray yourself. These weapons can also be useful for procuring ingredients that actually fight back. The parana-like strawberries are particularly vicious in that regard. If you die from a pack of killer tomatoes you'll respawn at your factory with some materials and money lost, so it's not the end of the world, but the lost time can be a killer.

One obvious feature the game is lacking is competitive multiplayer. The automated soup rival that you play against on each stage could easily be another person - all that the network would have to keep track of would be the actual soup rockets sent out. Sure, a change to the win condition for levels would need to be made, but this is a relatively minor hurdle. Multiplayer options do exist, with co-op being possible on every campaign level, as well as weekly challenges that allow asynchronous competition between each soup maker, but it's tough not to lament what could have been.

Presentation-wise, Nom Nom Galaxy is not a technical masterpiece but it functions well enough, apart from on a single part of a single level which is host to some serious framerate issues. The little touches added to the world, however, help to alleviate the lack of graphical flair somewhat. For example, all of the little robot helpers have names instead of just designations, and the soups are host to cute and “punny” names.

Nom Nom Galaxy certainly isn't perfect, but it's hard to be too disappointed in a game that is so adept in two areas I'm particularly fond of in gaming - crafting and base building. If you find yourself in need of something to try out during the slower summer months, and fancy a bit of Terraria-like gameplay, then Nom Nom Galaxy comes recommended. Otherwise, you can just continue waiting for Q-Games' much more well-known upcoming title - The Tomorrow Children. Either way I'm done writing, so it's back to the wild world of space soup for me. 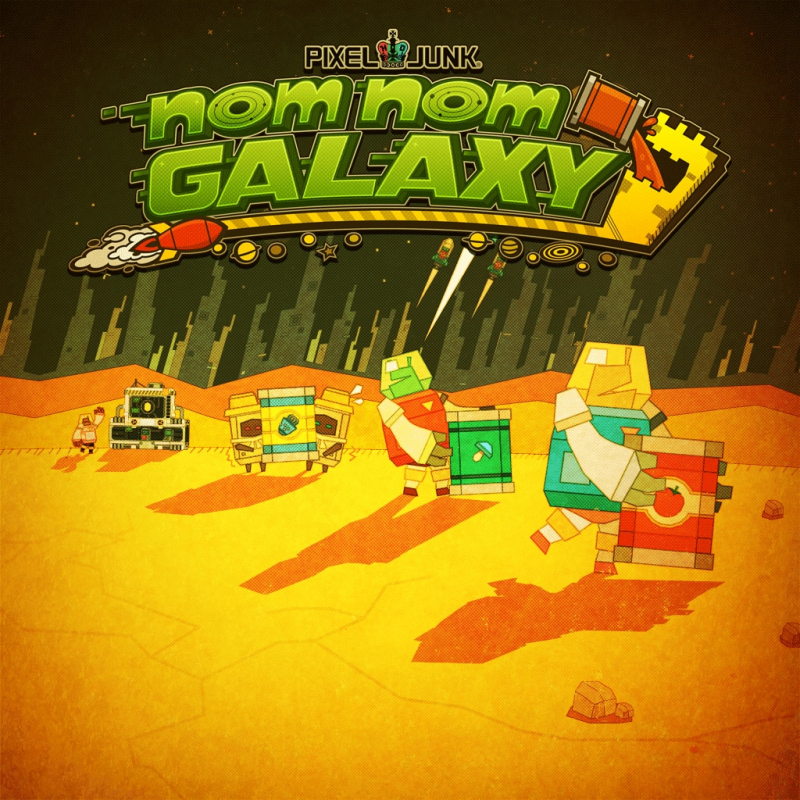