Sony's Spring Fever event continues on, attracting attention to the PS3's online games with sales and new releases. One of those releases is Wheels of Destruction, a budget release that promised a happy marriage between the car destruction combat of Twisted Metal and the class-based gameplay found in games like Unreal Tournament and Team Fortress 2. Sadly, the appeal of Wheels of Destruction ends with its promise. Once the game begins, the only spring fever you'll have is disappointment. 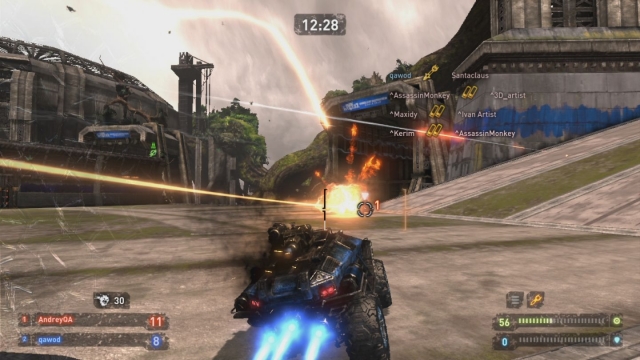 Boot up the game and you'll be rocked by Wheels of Destruction's rocking soundtrack. But you'll be less enthused by the lack of content. There are only two modes of note: Online and Offline. In either choice, you get three modes: Deathmatch, Team Deathmatch, and Capture the Flag. Not much changes between Deathmatch and Team Deathmatch, and Capture the Flag, while a nice change of pace, doesn't have the same appeal in cars that it does in a shooter. Offline, you get no singleplayer campaign or missions, just the same modes you get online, against AI opponents. It's not particularly exciting.

You get to choose between five classes of car (Scout, Soldier, Heavy, Engineer, Assassin) that each have their own ratings. They specialize in different roles (Soldier is all-around, Scout is speed, Heavy is shield and durability, Engineer is jet powered, and Assassin specialises in ammo) and you have the option of switching classes after every death. It's a cool concept, but I honestly didn't notice a whole lot of difference between the classes. Health is the obvious change when you switch classes, but otherwise, each class can be played in similar fashion, which dampens the appeal.

A little blandness in the gameplay options can be overlooked if the gameplay itself can hold it up. But Wheels of Destruction suffers from controls that are conspiring to get you killed. Cars, unlike human shooters, can't strafe, turn around quickly, or duck behind cover. Add that to a lack of radar or any warning as to when enemy fire is coming and you'll get blindside killed far too often. It's easy to run into a wall you don't intend to, and if you try to reverse to get back on track you'll likely be dead before you're back into drive. Even the different weapon types are hurt by control and design choices, as all weapons use the same auto lock-on feature when an enemy comes into view, making them nearly identical in use and rather plain. (Though it's always fun to burn enemies with the flamethrower). 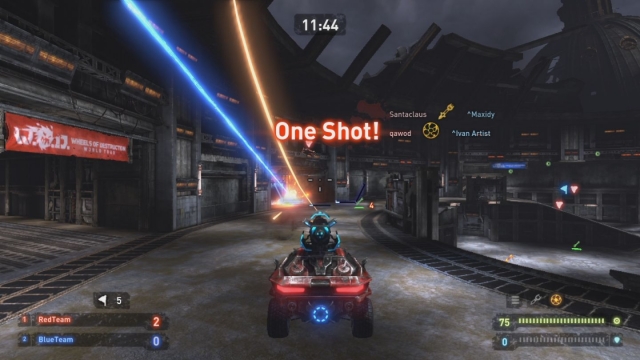 There are a couple of positives to Wheels of Destruction. The five stages look very nice and fit the post-apocalyptic war torn theme well. It is fun to drive around the stages and take a look at what Gelid Games has created here. Now, it's not going to compete with the best looking PS3 games in the graphics department, but it has nice polish for a cheap downloadable title. The other nice thing is smooth netcode; I didn't experience any lag during online gameplay and everything was running as it should have been. So all of my frustrating blindside kills and controls hijinx were happening without any hiccups. At least there's that.

Due to the lack of modes, stages, weapons, and class differences, Wheels of Destruction is not likely to hold your attention for long. There are a few extras and rewards challenges, but nothing truly stands out here. If you're not a car combat enthusiast, you're likely to get bored within a few hours and forget you ever played this game. Even at a $10 price point, I felt the game was lacking in content. 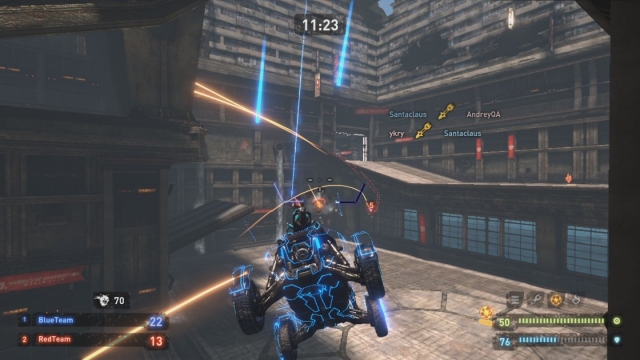 I wanted to like Wheels of Destruction. Gelid Games made the bold move of comparing it to the genre's top dog, Twisted Metal, and hyped up its class system in a way that made me excited to play. Sadly, the game itself didn't even come close to reaching the bar that was set so high for it, both by its developer and by Sony, who made it a key game in their Spring Fever promotion. Wheels of Destruction proves that you get what you pay for. Those looking for car combat fun should stick with Twisted Metal. Now, if you'll excuse me, I think I feel some Spring Nausea coming on...

This review is based on a digital download of Wheels of Destruction for PS3, provided by the publisher.