Upon answering the call to review World Gone Sour, I could not help but brace myself for the worst. “Oh great, an elaborate advertisement disguised as a video game”, I thought to myself. But after playing World Gone Sour, a different thought crossed my mind: “Wow, this is a solid game, why aren’t all ads this enjoyable?” 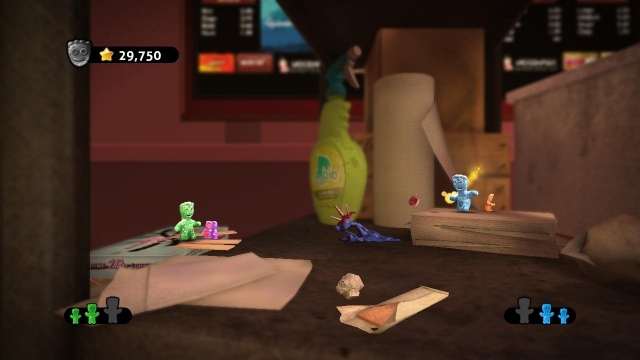 You might expect World Gone Sour to subliminally tell you to eat Sour Patch Kids in a warm, family-friendly environment, and call it a story. But developer Playbrains took this in the exact opposite direction. As a lonely, uneaten, Sour Patch Kid, you must traverse the world, teaming up with other Sour Patch Kids to achieve your goal of being eaten. On the way you encounter other Sour Patch Kids who are feeling neglected and angry about not becoming a human’s snack, and unfortunately, they take it out on you. The deepness and darkness of this tale is completely unexpected and provides a great backdrop to your quest to be masticated. I never expected to become so deeply ingratiated into a story about candy, but it happened, and it was as intriguing as it was creepy.

Creed Bratton from The Office lends his voice as the narrator. His consistent fourth-wall breaking and straight approach to this bizarre game is enjoyable and I cannot imagine another voice being associated with Sour Patch Kids. Method Man even gets into the act with some post-game music. It’s hard to describe what happens in this game as anything other than completely crazy, in this case though, it's a very enjoyable kind of crazy.

As for the gameplay, World Gone Sour is a simple 2D platformer. It borrows aspects from many popular platformers that came before it while putting its own spin on them. World Gone Sour knows who its forefathers are and makes references to them (Bratton will mention mushrooms at one point in his narration, party poppers launch you the way barrels do in Donkey Kong Country, etc.). It's fun to have a small-time platformer be so self-aware of its past and pay homage to it. 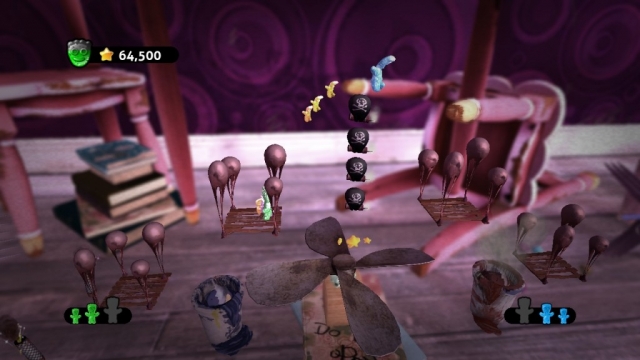 There are three main acts in the story, each filled with multiple levels. Each level creatively works with your character’s small stature to create a daunting platforming experience. The variety of small props in use adds to this experience: props such as refrigerators, kitchen knives, straws and…buzz saws. (What? I told you this was dark!) The 2.5D presentation feels like playing LittleBigPlanet without all of that warmth and fuzziness.

In addition to the standard repertoire of moves, your Sour Patch Kid has the ability to shrink and grow. As you collect more Sour Patch Kids in each level, their combined mass will allow you to grow up to two times larger. A larger frame puts more power behind your attacks and allows you to ground pound. It also helps by giving you protection from many dangers, but the smaller, more vulnerable frame is often needed to walk through small areas and traverse narrow gaps between deathly traps. The ebb and flow between small, medium, and large adds an element of strategy to the traditional gameplay and breathes new life into it.

Controls do provide a slight issue during the game however. Jumps and double jumps are a bit floaty, so timing your jump and calculating where you land can be a bit tricky during crucial precision platforming moments. The wall jump is not very precise; you will sometimes stick to a wall when you don’t mean to and vice versa, which creates a problem, when, say, a bed of spikes is rising up after you as you try to wall jump. These problems can be adjusted to over the course of the game, but that does not excuse the existence of these flaws. 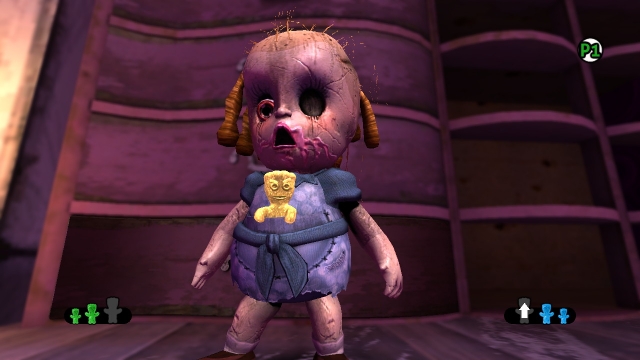 The game is short; it can be beaten in just a few hours. But for five dollars, that’s not so bad. It’s a bite-sized platformer for a bite-sized price. World Gone Sour includes collectible items in each level and also challenges you to save every Sour Patch Kid in each level. Doing so increases your score and you can track this score against the rest of the world on the online leaderboards. There is also local co-op play for a two player experience.

World Gone Sour is an advertising vehicle for Sour Patch Kids. That much is true. If you are turned off by purchasing something that advertises, then you probably won’t give this game a chance. But that would be a shame. Games do not have to be bad, unenjoyable experiences, just because they’re connected to a real world product, and in the case of World Gone Sour, they can even be quality experiences. At the low entry point of five dollars, World Gone Sour provides you with a fun romp through a dark and dangerous world. And if you don’t want to eat the candy it’s associated with? That’s fine, you don’t have to. Just enjoy the game.

This review is based on an XBLA download of World Gone Sour, provided by the publisher.