There is apparently no dress code of princess.

Code of Princess? What the heck does that even mean? No, seriously, I’ve played through the game multiple times now and I still have no freaking clue. So yeah, this is another one of those “Inigo Montoya” situations when dealing with a Japanese developed property when you are a Western-minded person. As many times as they use the word “code”, I just find myself saying, “you keep using that word. I do not think it means what you think it means.”

That aside, I’m going to go ahead and let you know right now, this is a game that both honors the common tropes of Japanese developed games (and by extension anime) and lovingly satires them. Of course, if you look at what went into making the game, this would not be that surprising. Code of Princess has quite the crazy pedigree behind it.

The game design was done by former Treasure developers HAN and Masaki Ukyo, who are both known for their work on the classic 1996 Sega Saturn title, Guardian Heroes. Character and world design was done by the talented Kinu Nishimura. If you’ve played Street Fighter, you’ve seen her work. It is developed by Agatsuma Entertainment, which is a branch of the Bones Studio(makers of the anime series RahXephon, Wolf’s Rain, and Fullmetal Alchemist) and it was localized by Atlus (Catherine, Shin Megami Tensei, Persona series). All of this talent joined forces to make one of the more affectionate parodies of Japanese action games I’ve experienced in a long time.

Which brings us to elephant-in-the-room time. The main character in this game is a young attractive blonde woman wearing next to nothing while she swings a sword longer than she is tall. This half (well, more like three quarters) naked female character is sure to draw a lot of attention from the stereotypical gamer demographic and rolled eyes from everybody else. This may sound odd from the guy who wrote an article about objectified women, but after actually playing the game it didn’t bother me. She's not a negative female stereotype, she’s just a parody. When you combine the character’s personality with how the story itself pokes fun at her outfit, you can almost see them winking at you through the 3DS screen. But, hey, you’re probably already scrolling down to glance at the score because I haven’t really talked about the gameplay yet.

Code of Princess is a 2D brawler with RPG elements. It mimics many hack n’ slash titles but it takes many of its cues from Guardian Heroes. This is no accident as (if you didn’t completely just skim the third paragraph you would know this) many of the people who worked on that classic title also worked on this one. So in complete truth, Code of Princess was designed as a spiritual successor to Guardian Heroes.

You will have to battle hordes of colorful enemies while switching between three planes. You have a more robust move list than your basic hack n’ slash title with light, heavy, specials, combos, and aerial moves.  Though there are still less moves than you would find in a fighting game. Upon completing a mission you will be rewarded gold and experience points. As you gain levels, you will get to choose how you level up your character to fit your play style. You will also both earn and be able to buy items that will give you stats boosts or grant you other bonuses like nullifying knockback or granting immunity to elemental effects. All this alone would have given you a wealth of customization options for your character.

Except,you only start out with one character, within minutes of starting the campaign you will start to unlock other characters. By the time you have played through the roughly 80 hour campaign you will have unlocked over 50 different characters. This includes every enemy and every character in every cutscene. That living tree monster? Check. That magical wasp? Check. The final boss? Check. An elderly woman you see in a total of two cutscenes? Check.

To be completely fair, you can only use the four main characters when playing through the story mode. However, for the many bonus quests, vs. multiplayer, and free play, you can choose any character you want. Now some of these characters are not truly balanced for the game. Certain creatures are so overpowered it would be difficult to lose and others (like the old woman) are so underpowered they are obviously meant as a joke. Still, the wealth of content is quite amazing. You can play single player but also with up to four other people with local or online multiplayer. The multiplayer is both co-op and vs. so you can greatly extend your fun with this game by finding a Code of Princess buddy. The story is set up to make sense whether playing as a single character or with a group of four though.

Of course, the story is nothing to praise too highly. It is your standard anime fantasy plot. Evil queen, monster army, heroic princess, colorful cast of friends met along the way, “surprising” plot twists involving characters you didn’t know were related, and it is really all par for the course. However, that dialog is what will keep you going. Atlus have outdone themselves on the localization. The lines are witty, quick paced, and genuinely funny. The English voice acting is also quite excellent, which combined with the writing will make you truly appreciate these characters and their quirks.

The main characters are actually a lot of the enjoyment you will get out of the game. They fall into your typical group of anime tropes as well as typical beat ‘em up character roles.

* Princess Solange Blanchefleur de Lux – (loosely translated her name means “dignified white flower of luxury”) who is your standard warrior class character with a personality of the sweet naïve girl. She wields the massive sword of destiny, named (you can’t make this stuff up) the DeLuxcaliber.

*Ali-Baba – (yeah, that happened) the speedy thief character who plays the role of deadpan snarker.

*Lady Zozo – the dark mage of the group, she is an aloof necromancer who had to cobble her current body together with spare parts and has many of the best lines of dialog.

*Allegro Nantabile Cantabile – a technical wildcard character, the delusional wannabe ladies man of the group. He’s half bard, half sage, and all annoying elf. His weapon of choice is a magically powered electric guitar and he will make you laugh … for all the wrong reasons.

Each of these characters has a very different play style and figuring out their unique movesets makes it well worth playing through the story mode multiple times. The one thing you will need to learn to master all of the characters is the lock-on and burst mode mechanics. Locking on will allow you to attack a character even on a different plane and it will double your damage. Activating burst mode will double your damage while consuming your magic. These mechanics will stack so it is possible to do quadruple damage to a single enemy if you set it up correctly.

Actually, out of all the hack n’ slash games I’ve played, this is the first that has both intelligent enemy A.I. and a need for strategy. Sure, in the first few missions you can win with simple button mashing. However, you will soon find enemies who flank you or stay away from you and focus on hitting you with status effects while the bigger monsters melee you. Missions can vary either by asking you to defend villagers, defeat a number of monsters within a time limit, or take down a boss. By the time you get to the final boss, you will have had to learn how to balance cautious defense with combo-heavy aggression and wise magic consumption.

You will hit difficulty spikes a couple of times as you progress. This would be frustrating if not for the fact that you can play numerous bonus missions to in effect grind your character level up enough to be able to succeed. You gain levels quickly, typically once a mission. Instead of complaining that it feels too easy, I remind myself that with 50+ characters to choose from you will be thankful that grinding has been toned down from requiring hundreds of hours of your life per character. Even with faster than normal leveling expect to get hundreds of hours out of the game if you are trying to unlock all the content.

The animation is smooth and action fast, with only a few moments of slowdown when some 50 enemies are all on screen at a single time. The music is good enough that they included a free soundtrack CD in all the first print boxes, along with an art book. So far so great, but this is not a perfect game.

Even with some mission and enemy variety, there will still be your typical repetition that comes with a beat ‘em up game. You will soon hone in on your character's ultimate combo and be able to perform it to defeat 80 percent of your foes. Worse, since you will be performing the same moves over and over, you will hear the same voice sample over and over. If I had to hear Solange say, "sorry about this" right before using her launching move one more time I might have gone insane. You keep hitting them with your sword until they die, how sorry can you really be princess? *ahem, sorry* Also, even with hundreds of different types of equipment, you will soon find a combination that works for you and spend much of the game looking through the item shop and not buying anything because hardly anything is better than what you have already.

The biggest problem is the catch 22 of this game. The missions are short, each one roughly between five to ten minutes long. This is a good thing since being on a portable system it works to be able to hammer out a couple of missions and put it away as you need to. But this is a bad thing in that if you actually have more than half an hour to play it, you will find it hard to not put down. Each mission starts and ends with a cutscene before making you select another one. This also means that longer play sessions don’t have a flow to them and the story isn’t so nail-bitingly good that you “just have to know what happens next”. In fact, once you have experienced the story the first time you’ll soon fall in love with the R-button as holding that down makes the cutscenes play at 20 times speed. I would have preferred the ability to skip cutscenes on repeat playthroughs but I’ll take what I can get.

If you can’t stand hack n’ slash games, this won’t really change your mind. If you just don’t “get” anime-styled games, this will probably not make you a believer. If you don’t like handheld gaming, this will likely not be the game that makes you break out your wallet. However, if you are a fan of anime, 2D action brawlers, and portable games that cater to the more traditional gamer… give Code of Princess a try. It's a fun action game with many colorful characters from some of the most talented game makers working today.

Or just get it for the bouncy pixel boobies.  If that is what floats your boat.

I won’t judge you. Out loud.

This review is based on a 3DS copy of Code of Princess. 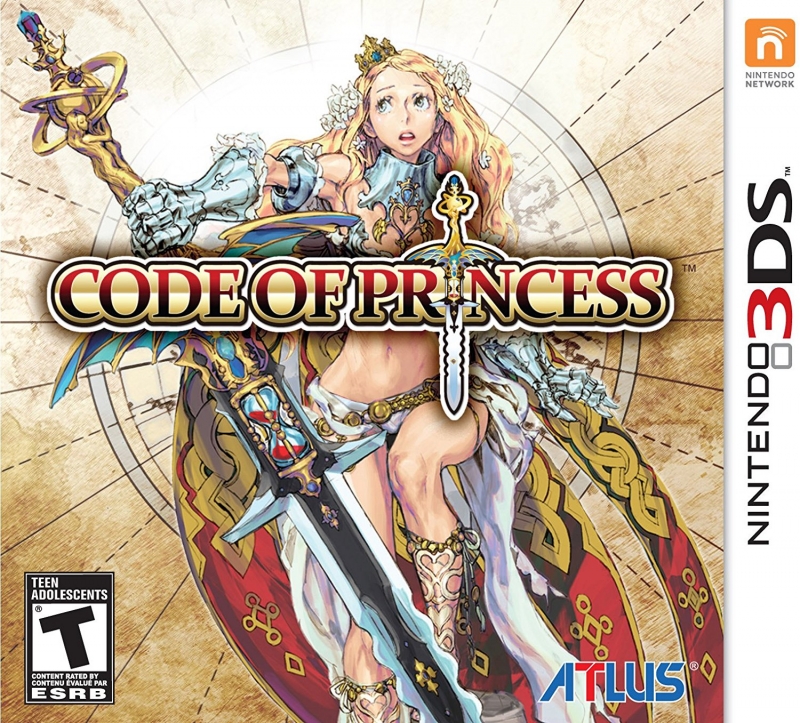