Vita fans haven't had it easy lately.  The platform is floundering a bit in sales and internet forums are awash with doom and gloom.  Dokuro's hero doesn't have it much better.  Being a tiny skeleton constantly pushed around and looked over while he tries to do what he can, it's actually somewhat reminiscent of the platform itself.  So gather round, kids, and I'll tell you the allegorical story of Dokuro, and hopefully Vita's end can be as happy as this one.

Dokuro is the classic fairy tale of a princess in distress and the gallant skeleton that comes to save her.  Alright, you caught me, it's not quite the standard fairy tale.  There is a princess in distress, though.  Kidnapped by the Dark Lord under whose employ you work as a skeletal minion.  Noticing how distraught the princess is you quickly weigh your options and decide that saving her is the way to go.  There's a bit of text exposition from some of the characters but the story is mostly told through images and simple sound effects; this is particularly true for the interactions between the princess and her muscle and skin deficient savior.

Fairly quickly you gain the ability to change to a much more handsome prince for short periods of time, and this is where the story gets a bit more interesting.  The princess can't see the skeletal you, but can see the princely you and seems to become infatuated with that version.  It reminds me of some of the classic superhero stories where characters struggle with love interests that seem to only be interested in the superhero and not the secret identity or (some would say) the real person behind the mask.  Chalk art style with minimal animation during story sequences works well with this somewhat simple tale and the design of the characters really puts you in a caring mood.  It's not the kind of narrative that's going to leave you pondering long after completion, but it's cute and enjoyable.

So how exactly do you save the princess?  Dokuro is basically a 2D puzzle platforming escort mission.  You have to help the princess get across each stage to a flower where she'll take a break briefly and you'll continue on past the flower to the next stage.  More than likely this will involve moving blocks and platforms in order to make a path for the princess while getting rid of any obstacles or enemies in her way.  She can only take two hits, while you can take five before kicking the bucket, so often it's a good idea just to block her from harm with your body, Secret Service style.  Most of the game is played through standard controls, but touch controls are used to draw chalk lines that can act as detonator cords, ropes, or even adjust the level of water in certain areas.

Gravity switches, hot air balloons, and fans all make an appearance, though little really stands out as memorable.  One unique obstacle - metal beams placed over a fire that allow you to cross over, but after a time they'll heat up to the point that standing on them will kill you - as simple as it sounds, is the first time I recall heat transfer being used in a video game.  I'll even forgive the fact that while metal beams block the fire and heat up, wooden barrels just block the fire without consequence.  Then again, I'm playing a game with Dark Lords and skeletons so I probably shouldn't think too much into it.

Prince mode is a temporary transformation that gives you more powerful strikes to kill enemies instead of just knocking them around, and also the ability to pick up and carry the princess through tighter obstacles.  That's not to say that your skeletal version is useless, as this is the only version that allows you to double jump and your smaller size in this form is often helpful for getting through small spaces.  Later on prince mode loses some of its detriments, but this size difference means that there are still reasons to switch from one form to the other.

Unfortunately this all comes with a couple of caveats that hindered my enjoyment to a large degree.  The design of some of the puzzles is such that there are often parts that can easily one hit kill you, and since the puzzles don't have any checkpoints mid-way through you'll find yourself having to redo sequences over and over in order to get back to the part that killed you, only to die once again.  Puzzle-platforming games are especially damning when they feature this type of repetition because there's often no skill involved to the parts you have to repeat and you are instead just going through the motions of a puzzle you've already figured out.  If you get too tired of retrying you can use one of a pool of ten skips to bypass that stage, but being able to skip a poorly designed level doesn't negate its existence.  Contacting deadly obstacles also seems a bit too easy and I sometimes died from a block that probably would have only stubbed my toe in reality. Finally, as in almost any escort-based game, sometimes the princess will refuse to do the smart thing and will get herself killed without any fault on your part.  It's tough to program a character perfectly so that they won't ever do something boneheaded, but that's little comfort when she kills herself near the end of a particularly tough stage.

Try not to be too disheartened, though, because even with those issues I still enjoyed my time with Dokuro overall, and for $20 you can get around 10 hours of puzzle content.  Each stage has a coin that you can collect if you're a completionist, but it's not clear what your reward is for finding all of them (if there even is one).  All in all, Dokuro is a cute, fun puzzle platformer.  Here's to happy endings for all the little guys that get ignored by their princesses.

This review is based on a digital copy of Dokuro for the PlayStation Vita. 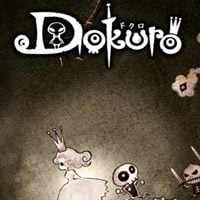