To scribble or naut to scribble?

The Scribblenauts series has survived on a great concept and average games. Does this trend continue?

In the first game for the DS you learned of a magic notebook that could summon almost any non-proper noun you could think of. In the second game you gained the power of adjectives, allowing pigs to be flying giant purple pigs. Both games had a bit of a control problem and it was frustrating to play without accidentally killing your avatar, Maxwell.

Ah, but now Scribblenauts Unlimited has arrived on a console. Not just any console, but Nintendo’s shiny new Wii U console. With the much-touted new touch screen having gamepad, it seems like Scribblenauts would be an easy fit. In many ways, yes. In other ways, making the screen bigger also helps to highlight a few issues.

But first the good. Once again you control Maxwell, the boy with a rooster hat and a magic notepad. This time around there is a story. What? Plot? How’d you get here in Scribblenauts? It is still pretty basic. You and your sister have special magic items and it has made you kind of spoiled brats. You end up annoying a wizard who slaps your sister with a spell that is slowly turning her to stone ... you know, how you do. Maxwell must use the power of the Starites to cure her curse, so he sets off to solve the world’s problems … with adjectives and nouns.

So off you go. You run into a fireman who is injured. You can summon a doctor to heal him. A girl needs to get a cat down from a tree. You could chop down the tree, or you could rewrite her DNA and make her a floating girl. Unlimited’s lexicon is huge and there is little you can think of it can’t recognize.

Really the game is a large sandbox that should appeal to the same gamers who enjoy Minecraft or LittleBigPlanet. Instead of manipulating the world, you can manipulate the things in that world. The new object editor is very deep and already you are seeing how potent it is by how quickly people have been able to translate their favorite pop culture into the Scribblenauts universe.

The game is also much faster paced. Instead of loading individual missions, you will load into different interconnected areas. Each area will have about a dozen challenges to complete and it will likely be part of the area’s theme. This is a much more elegant solution and gives the game a nice flow from puzzle to puzzle.

While the game does take advantage of the more powerful console, it kind of forgets it's on a console. It's possible to play the entire game on the gamepad screen only. In many games that would be a positive, but here it means that you will likely never look at the TV. The game gives you next to no reason to do so.

Aside from using the analog stick to move Maxwell and some zooming with the shoulder buttons, you will likely only use the stylus to control the game. While I’m glad you can use it for typing and in the object editor, they still can’t figure out a good way of allowing you to manipulate and place those created objects in the world without looking at the touch screen. Worse still, while it is great that we are given a special starite vision that highlights those people that have quests, you again have to look at the touchscreen to see that. It doesn’t alter the TV at all when that mode is activated.

Really I felt like the TV was there for the benefit of anybody who wanted to watch me play my mostly portable experience. It turned my large HD TV into the secondary screen while the smaller touchscreen was my focus.

It’s still fun. The more creative thinker can enjoy the freedom this game sometimes delivers. A man being attacked by a demon? You can summon a priest to exorcise it… or you can summon God and give him a rocket launcher. You have to help two kids get their ball back from an old man who will attack anybody who steps foot on his lawn. So far I was able to make the kids invisible, give the old man a sleeping pill, or even just summon a goat to eat his lawn. I had a person that was trying to go to sleep but couldn’t because of a snoring roommate. Surprisingly making him deaf was a valid solution.

The massive variety in the puzzles along with the huge lexicon means you can have a lot of fun just playing around in the world and seeing what happens. And again, much like Minecraft or LittleBigPlanet the fun you have is more in what you put into it instead of waiting for what the game provides you. Anybody who doesn’t want to use their imaginations should probably steer clear.

Except that sometimes the game slaps you in the face for being creative. For a game that touts that you can “write anything, solve everything” it really follows Occam’s Razor to a T. I had a fisherman who was complaining that he had nothing to reel in. So I thought it would be funny to unleash a kraken and watch as he tried to reel that in. Nothing. Ok, a shark? Nothing. Mermaid? Nothing. Whale? Nothing. Creature from the Black Lagoon? Oh, popular noun … isn’t in the game. So I have this crazy mixture of aquatic creatures and the fisherman isn’t doing anything. I give up and just type ‘fish’. Boom, starite, mission complete. Sigh.

Or hey. I come upon a bunch of people frozen into statues by Medusa. I’m told that Medusa is angry because she is lonely. Ok I’ll make her a “special friend”.  I try a snake-like handsome dude. To my surprise this is something the game actually makes, but she isn’t moved. I go through other things, eventually saying screw it and trying to summon a mirror to see if it’ll turn her into stone. Nope. What is the answer? Male Medusa. I performed my first literal facepalm of the year. I made it through the entire election season without doing it, but having me just give someone a rule 63 version of themselves because they are lonely forced my hand.

I’m just disappointed. So much good with too many slip ups. They give me tons of freedom, but limit how effective the choices are. It just ends up making you slip into a few things that always work. Someone needs to sneak by someone else? Make them invisible. Girl is crying (happens a lot more than you’d think in this game)? Give her a flower. Have a threat you need to get rid of without killing? Sleeping pills work every single time. I quickly just figure out how the developers want me to think and I stop being creative because it isn’t getting me anywhere.

There are other features, like a totally underbaked multiplayer and some abilities to share your created items online, but the whole thing just really feels like someone told them the Wii U is a large DS and they never bothered to figure out if that is correct or not.

Back to formula guys. You still have a fun little sandbox game with quirky, unique art direction and a clever hook. Come back with something that uses my TV and rewards me for thinking beyond a 3rd grade level and we’ll talk.

This review is based on a Wii U copy of Scribblenauts: Unlimited. 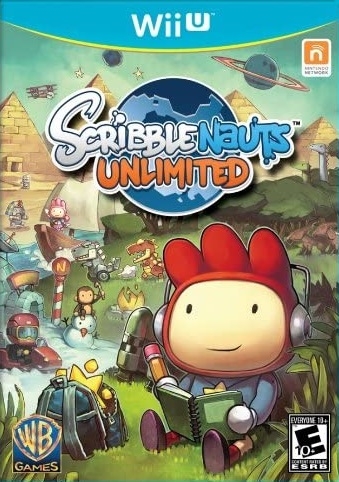